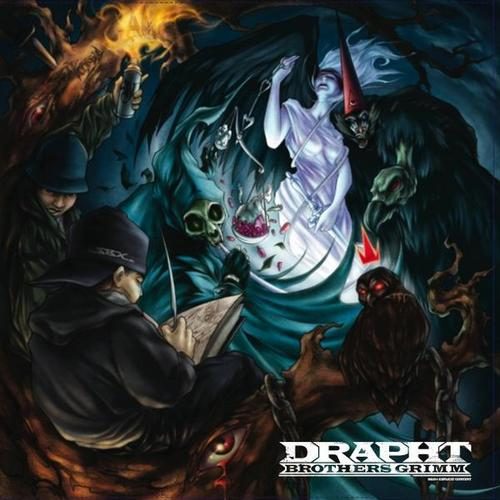 Perth MC Drapht, born Paul Ridge, has been making hip hop music since he was a teenager, both as a solo artist and as part of the Syllaboliks crew. “Brothers Grimm” is his third solo album, an impressive feat considering he isnâ€™t old enough to rent a car yet. He may be from Western Australia, but the intro to the album samples a whole lot of East Coast rappers from KRS-One to Jay-Z. This seems to indicate both the artists that influenced him, and the company heâ€™d like to keep as an MC.

Drapht is a thoughtful lyricist who is able to bear his soul one minute (“Falling,” “Insominia”) and celebrate getting loaded the next (“Boom Boom Boom”). His finest moments come in tracks like the gorgeously-produced “The Money,” in which he raps about the evils of greed and the false hope that money is:

The persona that emerges is of a sensitive, intelligent guy who isnâ€™t trying to be the hardest dude in the room, and doesnâ€™t feel the need to prove himself as anything but a rapper. It is a refreshing change of pace from the usual hyper-macho, hyper-insecure hip hop artist. Drapht has a unique delivery as wellâ€“his flow is melodic, with a dash of dancehall and a definite pop influence, and his voice tends to go up at the end of every other line. While his rapping didnâ€™t always work for me, at least he underwhelmed me over good beats. The decks and knobs are handled by a team of producers, including Trials, Plutonic Lab, Simplex, and M-Phazes, who create some very solid sample-based hip hop. â€œThe Moneyâ€ offers up some dusty breaks, and on “Rest In Peace” mines Middle Eastern music for its hook. Throughout the album the production sounds clean and crisp, further evidence that the Aussies know their way around an MPC.

“Brothers Grimm” offers up some good songs, but also delivers its share of clunkers. “Don’t Want To Work” is an annoying song in which Drapht repeatedly states the obvious; “Where Ya From” is a mixture of ragtime jazz and hometown shoutout that falls flat; “Falling” is too melodramatic for its own good; and “Put On A Record” is just plain irritating. However, he gets it right more than a few times, especially on “Money,” the somber “Dreams and Dreamers,” and the politicized “Rest In Peace.”

“Brothers Grimm” may not be an instant classic, but there is enough right with it to make it worth checking out. Drapht knows his way around a mic, and he’s backed by consistently good production. To make the package even more enticing, the album comes with full-color insert complete with lyrics. Hip hop fans who want to check out the other West Coast could do worse than start here.