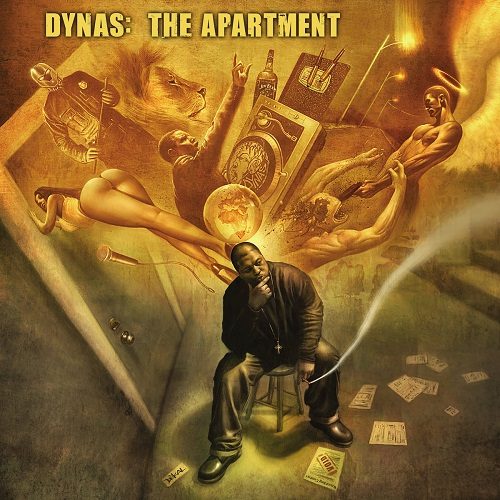 Dynas is yet another rapper bursting with talent whose career fell victim to the curse of a dead end major label deal, only to find himself brushing off his shoulders and moving forward in the indie world. Right off from the get go “The Apartment” is a charming combination of street infused attitude and urban soul-seasoned hip hop, but that same charm could hold it back. Despite the success of one Kanye West the rap world has been viciously slow when it comes to helping cats with a brain and a chip on their shoulder move significant numbers of records. “The Apartment” feels destined for this fate, and underground love, simply because it rides the space between radio hit and brain food by such a narrow margin.

Take for example the kick off track “Higher Definition.” It’s totally true that Dynas unleashed pure lyrical fire for the song’s three plus minutes, and as a street freestyle that would easily gain him mixtape buzz on a Slaughterhouse or Chamillionare level. Yet as an album track the total lack of a hook will leave the mainstream minded college set the smooth danceable production seems shooting for scratching their heads. But instead of keeping up the art over pop craft brilliance of “Higher Definition” the rest of the album starts moving in a bipolar direction backpackers and lyric fiends will find simply bizarre.

“The Future” (featuring DJ Jazzy Jeff) has a groove Common would collab with Westside Connection for, but Dynas’ lyrics suddenly start to take a turn towards that of a pissed off dude who’s struggling with trying to live within the legal confines of society and dealing with social injustices. If he simply stuck to rapping about these topics there would be more than enough meat for him to fill a whole record with his thoughts, which would mash up perfectly with the carefully timed (and thankfully short) skits involving his shady friend who’s watching his apartment for him while he’s out on tour and is taking advantage of the situation. The screwing of the working man by those he tries to hold up is something rap doesn’t get to hear a lot about and the concept works stunningly well here.

Then you’ve got Dynas’ occasional tracks that are simply blatantly pandering to the ladies in the crowd, and while these songs are still fresh they feel like afterthoughts in the track listing. “Totally Tanya”s break up anthem does however show off the vocalist’s underutilized Island vocal influences, so while you might be rolling your eye’s to this slice of generic love sick poetry at times there’s enough meat here to keep it from being skippable.

Now I know that seems like a page and a half of bitching. I’m not. “The Apartment” features some serious pacing and content consistency issues so without warning you, you the listener might not give this record the proper time you might otherwise. You know what you’re looking out for, and if you listen to this record as a series of dazzling songs on shuffle you’ll find a treasure trove of killer material. Uncle Ricky, aka Slick Rick, shows up on “Family Jewels” and he and Dynas spout off about the insanity of ladies without Rick every slipping into his trademark misogyny while still holding down his legacy of brutally fiery guest spots. DJ Jazzy Jeff contributes two beats that make one wonder why he isn’t popping up more these days, with subtly incorporated turntable magic holding court next to beautiful keyboard and horn twists. The other beats are made up of some no names like 9th Wonder, DJ Spinna, and J-Dilla. Yeah, from a music stand point this record is nothing to sneeze at.

Dynas is officially on my watch list. His “Apartment” is full of smart, flippant rhymes that hip hop heads of various flavors are going to find something to like about. Even political nuts are going to lose their shit to “90 Degrees” (featuring Wreckonize, LMS and Rich Media) about hip hop profiling by cops, even when it comes to white dudes who hang out with the “wrong” kind of friends, and “Come Along” a brave look at the history of black history in America that features fiery verses from guest Tiye Phoenix. It was refreshing to hear a bassass female rapper who didn’t once mention how great she was in bed and instead simply lets go the flood gates of rage. Props Pheonix.

Dynas has got a brilliant collection of singles here. With a little work to mix up the different styles of tracks and create a better flow it would have been a classic. It’s about creating a total package. You came close this time. My expectations for a follow up are high.