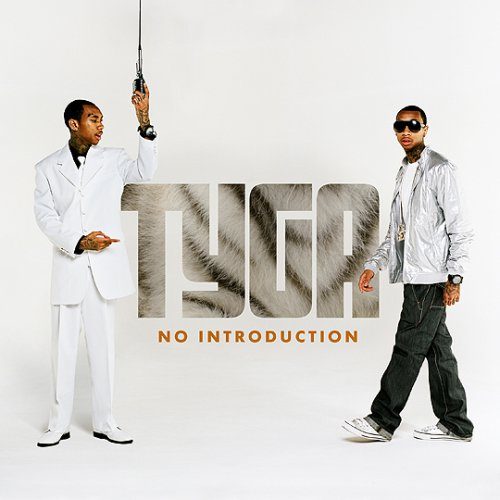 The phrase “It’s not what you know, it’s who you know” are words to live by, especially for breakout artist Tyga. Hailing from Los Angeles with familial ties with Gym Class Heroes’ Travis McCoy, Tyga is well on his way. On the same token, as he his marked as being under McCoy’s and Fall Out Boy’s Pete Wentz’s wings, Tyga has much to live up to. At this point, Tyga has it all laid out as his doors are wide open. With his name already in the limelight, it is up to him to prove his worth and talents through his lyricism. Tyga’s debut album, “No Introduction” under Wentz’s label Decaydance Records, tests his viability and is an example if he can ultimately survive on his own.

While attempting to come up in the ranks with the endless number of acclaimed artists who have risen from the City of Angels, Tyga incorporates some big names from the music industry to help him along in “No Introduction.” With a cousin like Gym Class Heroes’ Travis McCoy, I guess you’re somewhat expected to put out, musically that is. The first released single “Coconut Juice” from Tyga’s album not only features a cameo from Travis McCoy, but was also produced by Sluggo and S*A*M who produced Gym Class Heroes’ hit “Cupid’s Chokehold.” With all the factors and people involved, one would expect an exceptional track, but instead, it turns out to be a flop. While Tyga attempts to add to the reggae infused theme accompanied by beats with hard claps, “Coconut Juice” is just another track about drinking at the club, although it is conveyed in a roundabout manner. Ironically, Tyga claims he doesn’t drink and just thought of a song about the non-existent “coconut juice” drink.

Tyga gets some additional assistance in “Don’t Regret Now” with Fall Out Boy’s Patrick Stump. A hard hitting bass and synths commence the track as Tyga redeems himself with some fierce lyricism on this standout track. The positive messages about preventing mistakes from happening and having no regrets about the past permeates throughout the track. Adding to the track with his pop/rock style, Patrick Stump complements Tyga’s rhymes as they work together to build a very “radio ready” track. Tyga reaches beyond the realm of lyricism coming from any other eighteen year old as he delves deep into real life situations about his family life and personal struggles growing up multiracial in an African-American and Vietnamese family as he starts out the track with:

“What if your mother regretted having your brother?
Would you forgive her and kiss her and tell her you love her?
Or would you press it?
‘Cause being the only child could leave you feeling desperate
In need of attention every second
You wished you had a father figure
At least weekends man paid a visit
Aw forget it
What about lil’ Jason in prison?
You think an eight year old had bad intentions?
Pulling the trigger on dad just barely missed him
Just wanted to protect moms from the brutal hittings
But he’s a kid so it’s their word against his”

Exploring his dire family life even further, Tyga details the hardship and emotional anguish faced as a child in “2 AM.” Accounting real life situations as he remembers moments of being hit by his father while his mother did nothing, Tyga uses the track to almost purge himself of all the pent up emotions he once felt as he beautifully says, “I got anger, that’s why I paint these songs vividly painting.” Although it seems almost too personal to reveal such details into his life, Tyga stays on point and turns it around and hopes the best for the future as he says, “…hopefully time heals the pain.” With such powerful lyricism, Tyga shows his maturity at a young age as he is able to reflect on the despair he has once faced while showing that he has only grown from it.

With the help of singer Patty Crash, Tyga continues to remain solid in “Diamond Life.” A catchy hook from Patty Crash along with Tyga’s lyricism only play up the rock/hip hop track full of hard drums, claps, and synths as Tyga explains “he’s aiming for greatness.” Although “Diamond Life” is another track that could clearly make the radio waves with its upbeat sound and memorable phrases, Tyga still needs to raise the bar with his overall lyricism that can seem simplistic at times.

Unfortunately, aside from the already named tracks, the rest of “No Introduction” is predictable and carries an expected sound from this newly found eighteen year old emcee. Reverting back to a more teen driven crowd, Tyga’s rudimentary wordplay and subject matter is seen in tracks such as “AIM” which refers to the popular AOL Instant Messenger and in “Cartoonz” in which Tyga places himself as a cartoon character. Attempting to be humorous and experimental, Tyga lacks depth and experience as he falls very short in showing off his lyrical talents as he makes elementary rhymes and childish references. In “Woww,” Tyga praises himself for a new sound ready to be released, when in fact, the sound is nothing more than a heavy synthed cornucopia of disarray. While trying to incorporate electronic sounds and a sense of uniqueness, the sound is not mastered and clearly something that has been heard over and over again. I’m still trying to figure out what the extra “w” in “Woww” represents? With the rather bothersome high pitched synths throughout “Press 7”, the track explains the voicemail tag between Tyga and his woman as he ultimately lets her know that he is done with the relationship after all. I suppose the message was clear enough as pressing “7” erases messages on one’s voicemail. Clever perhaps? No, but many emcees like to incorporate the overused voicemail messages and yet it still never wins me over.

Tyga takes his shot at winning over the ladies with his failed love ballads as seen in “First Tymers,” an twist on Slick Rick’s “Teenage Love.” The overused, dull piano in the track is uninteresting as Tyga explains that he is trying to win over a girl that he feels as though he will soon lose. While exploring the depths of his love, Tyga regresses to unintelligible lines such as, ” I was waiting for cupid to come, shooting arrows through my heart, know you wanna be apart.” With the help of deep vocals from Wil Guice, Tyga tries another love song in “Pillow Talkin'” as the repetitious, slow piano melody is monotonous as the lyricism remains uninteresting.

In his debut, Tyga’s “No Introduction” is a hit or miss. Some may praise that the maturity in his lyricism is apparent in tracks about his family, while other may see his lyricism to be undeveloped when viewed as a whole. Taking into consideration that his fan base probably consists of young, teenage girls, his debut wasn’t a definite flop after all. Tyga definitely has the potential to come up in the hip hop scene especially when his name is tied to even larger names than his. It is clear that as he grows as an emcee and matures with his lyricism and delivery, Tyga will be able to appreciated on a grander scale while appealing to a larger audience. As this is just his introduction, we’ll have to wait and see how the story unfolds.