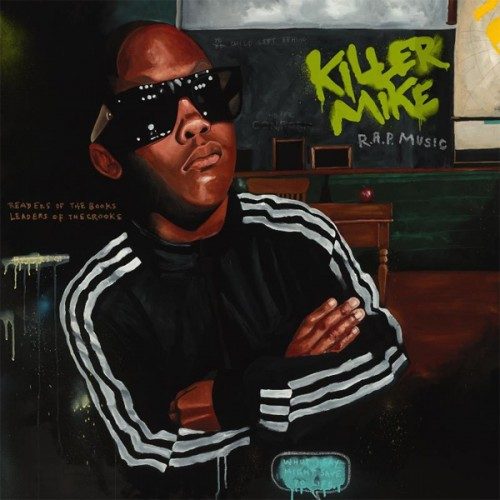 Do I need to introduce the ATL’s own Killer Mike? He’s been putting out consistently good albums since 2003’s “Monster.” His last album, 2011’s “Pl3dge,” made at least one RapReviews year-end best-of list (and would have made mine if I had made time to listen to it last year). His music combines the hilariously crass rap that the Dirty South is known for with the kind of intelligent outrage that Ice Cube perfected twenty years ago. On his sixth album, he teams up with El-P, the New York producer/Def Jux founder/architect of many essential millennial underground hip-hop albums. This isn’t exactly a partnership that was at all inevitable or predictable. Killer Mike is pretty damn Southern, not the kind of rapper you’d think to pair with El-Producto’s dystopian industrial noise. Is the result going to be like chocolate and peanut butter or milk and grapefruit juice?

All doubts are immediately set aside with “Big Beast,” a punch in the face that opens the record. Over staccato blasts of noise, Mike proclaims:

“Hardcore G shit, homie, I don’t play around
Ain’t shit sweet bout the peach, this Atlanta clown
Home of the dealers and the strippers and the clubs though
Catching you coming out the Magic City with a snub nose”

When the beat finally kicks in, it hits like a megaton bomb, full of rattling snares, synth whines, moans, and Middle Eastern flourishes. It sounds like Rick Rubin trying to do Southern hip-hop in 1986, all 808s and glorious noise.

Bun B and T.I. are featured on the track, and it’s one of T.I.’s strongest verses in years, bragging about being “Amerikkka’s nightmare/trap nigga fantasy.” It’s one of the best songs of the year, three minutes and fifty-five seconds of fire.

Mike takes it down a notch on “Untitled,” setting up three of the main themes of the album: the idea that everyone is out to get him for spitting the truth, how the politics and policies of the past forty years have led to the current state of African-Americans, and the spiritual connection he has with rap music.

“This is not a fiction that is sold by conglomerates
This is Soul of Black Folks mixed with Donald Goines shit
[…]
This is Basquiat with a passion like Pac
In a body like Biggie, telling stories like Ricky”

He ends the songs declaring “I’ma spit this ghetto gospel over all these gutter songs.” He spends the rest of the album splitting time between gutter and gospel. At one moment he’s rapping about strippers and coming strapped, and the next moment he’s talking about the institutionalization of poverty and racism. He does some Ghostface-style storytelling on “JoJo’s Chillin;”, describing a drug dealer who is dumb enough to smuggle drugs on a commercial airplane, but smart enough to get away with it. In the process, he gets an old lady in trouble with TSA, joins the mile-high club, sics the alphabet boys on a cokehead stewardess, and escapes in a wheelchair.

Mike immediately goes from a funny song about a drug-dealing anti-hero into a song that dissects the war on drugs and the arms for hostages scandal of the 1980s. He starts the song by taking hip-hop to task for promoting a damaging and dysfunctional lifestyle.

“If none of us own acres
And none of us grow wheat
Then who will feed our people when our people need to eat?
So it seems our people starve from lack of understanding
Cause all we seem to give them is some balling and some dancing
Talking about our car and imaginary mansions
We should be indicted for bullshit we inciting
[…]
We are advertisements for agony and pain
We exploit the youth we tell them to join a gang
We tell them dope stories introduce them to the game
Like Oliver North introduced us to cocaine
In the 80s when them bricks came on military planes”

It’s easy, and often justified, to blame the government, the Man, corporations, and basically anyone but yourself for the predicament you’re in. Mike has the courage to call out hip-hop for its role in making that dysfunctional culture cool. Mike also connects the troubles African-Americans are facing today with the economic policies started under the Reagan administration and continued to this day. This is laid out in the brutal “Don’t Die,” which describes how the war on drugs and dismantling of social programs started under Reagan leads to an African-American man being hassled by dirty police. He sounds like Ice Cube circa 1992 as he describes a morally complicated tale of being forced to defend himself against corrupt cops who target him because of his raps.

So, what about El-P, nee Jaime Meline? How can a man whose sound was originally described as “funcrushed” make an album for a Southern rapper? By throwing his industrial and experimental tendencies out the window, that’s how. This isn’t “The Cold Vein: Dirty South Version.” Instead, El-P channels 80s Def Jam, 90s Priority Records, and even Dirty South beats. This way he gets to be noisy while still being funky.

“Southern Fried” has layers scratched in guitar squawks and synthesized bass over a bass so heavy it is guaranteed to blow out unworthy stereo systems. “Ghetto Gospel” contrasts ambient synths with organ stabs, handclaps, and 808s. Even at his noisiest, like the glitchy “Butane (Champion’s Anthem),” El-P still manages to capture the swagger of Lex Luger club rap. And his verses on the track aren’t half-bad either. “Don’t Die” is like a missing N.W.A track. “Untitled” bundles four different kinds of production with some subtle whining synths.

It’s not all bombast and bass, though. “Anywhere But Here” is a relatively quiet song, featuring some chilling lyrics as Mike describes the home that feels like hell to him:

“They raided a house no drugs were ever found but a black grandmother lay dead
Like the dream of the King when a sniper took his life on the balcony of Lorraine’s Motel
These young black boys seem to self-sabotage themselves
Or maybe they’re just smart and they choose to go hard cuz they know the good guy will fail
So you ask what happens to a dream deferred, Langston
Well it kills itself”

“Willie Burke Sherwood” is on a similar vibe, another quiet song in which Mike raps about the path he’s taking, the mistakes he’s made, the challenges he’s had, the shit jobs he’s taken, and his road to being a rapper. The album ends with the triumphant “R.A.P. Music.” I’ve never really had a religious experience, in a religious place,” Mike explains. “Closest I’ve ever come to seeing or feeling God is listening to rap music. Rap music is my religion. Amen.” As he does throughout the album, he ties the present to the past, declaring:

“This is jazz, this is funk, this is soul this is gospel
This is sanctified sex, this is player petnecostal
This is church, front pew amen pulpit
What my people need and the opposite of bullshit”

Funky, noisy, angry, funny, profound, profane, spiritual, amoral: all of those adjectives can be used to describe “R.A.P. Music.” Killer Mike has managed to make a record like Ice Cube’s “Death Certificate,” something both poetic and crass, deep and crude, offensive and uplifting. He’s a gifted lyricist and a smart dude, and he’s able to drop knowledge without being preachy and be street without being ignorant. El-P manages to keep up with him all the way, and the result isn’t just as good as peanut butter and chocolate: it’s like peanut butter and chocolate followed up with a glass of 100-year-old cognac. “R.A.P. Music” is an album that is musically and thematically cohesive, succinct, devoid of any filler, and banging from start to finish. It’s easily one of the best albums of the year so far, and has the sound and feel of a classic.