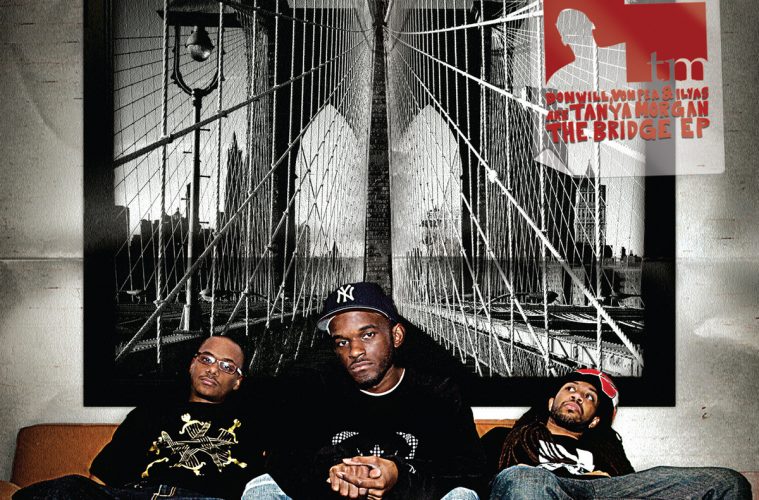 Tanya Morgan, a rap group made up of Von Pea, Ilya, and Donwills, divide their time between Brooklyn and Cincinnati. Their 2006 debut “Moonlighting” was an underrated gem of underground hip hop. Since then they have released an EP, several mixtapes, and host at least two podcasts. “The Bridge” is meant to act as a bridge between “Moonlighting” and their upcoming full-length “Brooklynati,” due out this fall.

“The Bridge” contains the same soulful beats and clever wordplay that made “Moonlighting” so good. Several of the tracks sound like they could have been on “Moonlighting,” and at least one of them is from the same recording sessions. Part of the reason for the similarity in sound is that the same players are involved, with both Von Pea handling much of the production, and Brickbeats handling the beat for the positive anthem “Be You.” “We Doin’ Our..,” and “Got 2 Get Done” are all mellow Von Pea beats that give the three MCs plenty of room to spit their truths. “Get Me Inside” uses the same sample in Lil Wayne’s “Kush,” and it’s a testament to the talents of Tanya Morgan that their track holds its own when compared to Wayne’s. Von Pea gets funky on “Filthier AKA â€˜Place,'” and the trio responds by spitting absolute fire.

“The Bridge” isn’t “Moonlighting 2.0,” however. They are clearly looking to move forward and take their craft to another level. On “We Doin’ Ourâ€¦,” Von Pea declares: “We ain’t in the same boat/I’m in the cab/I’m experimenting/I’m in the lab/and I ain’t waiting for you.” He isn’t lying; the very nature of the band is experimentalâ€“Donwill and Ilyas are based in Cinci, Von Pea is in the BK, and they do a lot of their recording over the internet. They also steer clear of standard hip hop clichÃ©s of thuggery and conspicuous consumption, instead keeping things very much in reality. Label problems, female problems, the state of hip hop, and the struggles of making it as musicians are all discussed over the course of the EP. That’s not to say they are above showing some swagger. “They say I’m negative cuz I’m turning #1 rappers into zeros,” explains Ilyas on “Filthier,” demonstrating that he clearly has a healthy sense of self.

The trio has always had a loose charm, and they come across like a group of friends (who happen to be gifted rappers) hanging out and spitting rhymes. This amicable low-key vibe works in their favor most of the time, but occasionally they get a little too loose for their own good. The title track features a Mysterious Productions beat that chops up organs, scratching, and KRS-One’s “The Bridge Is Over.” They are going for experimental, but it comes across as kind of sloppy, with the organs, scratching, drums and rapping not quite coalescing into a convincing pattern. On a few other points in the album the levels on the mics were off, so that one voice would come in much louder than another. It’s not the end of the world, but it would be nice to see TM get their technical issues in check for their next release.

Those minor gripes aside, “The Bridge” maintains Tanya Morgan’s reputation as one of the best underground rap groups around. This is a great EP, and should hold you over until their album drops this fall.