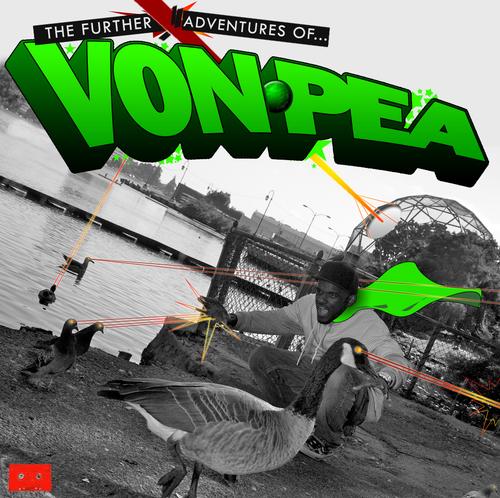 “The Further Adventures of Von Pea” is the latest free mixtape from Von Pea, the rapper/producer who makes up one-third of Tanya Morgan. Tanya Morgan are currently working on “Brooklynatti,” their follow-up to 2006’s “Moonlighting.” In the meantime Von Pea, Ilyas, and Donwil are keeping busy, putting out a slew of mixtapes, podcasts, and solo work. All of their material is marked by the same dedication to hip hop, and the same talented but laid-back approach to their craft.

“The Further Adventures of Von Pea” mines Quasimoto’s excellent 2005 release, “The Further Adventures of Lord Quas,” which also happens to be one my personal favorite hip hop albums ever. I dig Quasimoto’s high-pitched potty mouth, but it’s nice to hear a different kind of MC take a turn at the tracks, and Von Pea’s slightly sloppy, lightly blunted flow is perfectly suited to Madlib’s shifting, psychedelic beats. “Web 2009” rides the beat from “1994” while Von Pea offers up some classic battle rhymes:

“And it weighs a ton
Since I was acting bad in front of the nuns
Now I’m in a rap van running from monks
Ex’s coming to shows hungry to cut
Now homeboys, I’m not trying to ice grills
Sit around contesting mic skills
When you know damn well
I give you the chills
I moved in the house
We don’t gotta pay up the light bills”

Throughout the album you get a clear sense that he is enjoying himself and having fun with it. The fact that he is having fun makes it more enjoyable for the listener, because you feel like you are in on the joke and in on the party. At the end of “The Bubble,” Pea goes off on rappers who keep biting him. “I’m watching a Jay-Z concert, and this nigga Jay-Z come out on stage with a jacket on. I was the first rapper to ever wear a jacket, and niggas wanna wear jackets now,” he claims. “I was the first rapper with a DJ, the first rapper to wear sneakers, first rapper to rap over, uh, beats and shit.” There is a break in “Starstruck” where the rest of Tanya Morgan criticize him for giving away all of his music for free, and list off all of the free projects he’s done. “It’s like he’s allergic to money!” they complain.

He immediately goes into the futuristic electro of “Greenery.” Given the electro turn everyone from Black Milk to Common seems to have taken recently, it’s interesting to hear a beat Madlib created four years ago that sounds just like a lot of stuff coming out now. On “Mainjawn,” Von Pea freestyles over the beat from “Maingirl.” Von Pea’s horndog rhymes are good, but the real star here is that beat, with it’s backwards drum beat and middle eastern singing. It’s like Madlib was on some “Sergeant Pepper’s” shit when he was recording “The Further Adventures.”

Von Pea gets more serious on “Options (The Great Escape),” which uses the beat from “Crime,” and outlines the limited options for kids growing up in the hood, namely the drug game, hustling, or robbery. He immediately switches it up to a more positive tip on “Love,” showing love from everything to his mother to Mike and Ike’s. These tracks prove that Von Pea can do more than screw around on the mic, and his stabs at more thoughtful, more serious themes work just as well as his funnier songs. His ability to get serious makes him a better rapper, because you know that there is real thought and real feeling behind his rhymes, even when he is rapping about getting drunk and getting women.