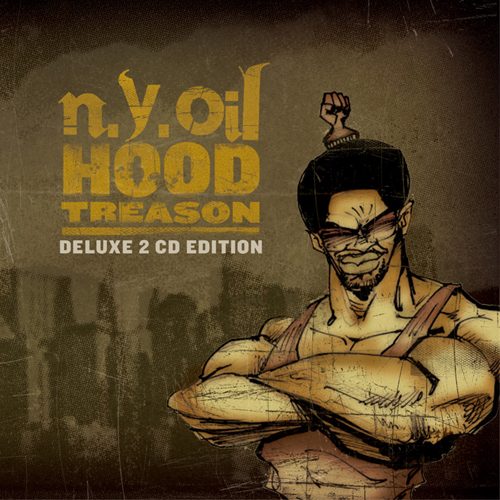 The internet can be a misleading medium, building interest in dead-end prospects and snubbing potential gold. Sometimes, though, an artist’s palpable buzz on the net is both fitting and justified by their future output. Such is the case with N.Y.Oil, whose video for the song “Y’all Should All Get Lynched” was banned from YouTube within 24 hours for its controversial juxtaposition of shots of artists like Three 6 Mafia with similar ones of blackface performers from old minstrel shows. It was a provocative statement, to be sure, and one that was not without precedent (see Nas’ “These Are Our Heroes” for one example), but it posed a number of new questions as well. Who was this guy with the cojones to call out prominent rappers for supposed cultural betrayal, and what were his credentials to make such a powerful accusation? And perhaps most relevant to hip hop fans, did he have the musical catalog to back up his fiery call to arms?

At least one of these questions can be answered easily enough. N.Y.Oil is a Staten Island MC whose prior claim to fame was as a member of The U.M.C.’s, where he was known as Kool Kim and gained recognition for the hit single “Blue Cheese,” which reached number one on the Billboard rap charts in the ’90s. Reincarnated as N.Y.Oil, he is now looking to speak truth to power about the current state of rap music as he sees it, and if some feelings get hurt along the way, so be it. Throughout “Hood Treason” â€“ which was originally released in 2007 and is now getting the deluxe treatment for rerelease by Babygrande â€“ he cites grievances and points fingers, producing a litany of charges against rap’s current crop of media darlings.

As the album title indicates, N.Y.Oil takes seriously the notion of loyalty to the streets that birthed you, and anyone he views as peddling rehashed black stereotypes for profit comes up for a serious beatdown on “Hood Treason,” resulting in a potent collection of songs that is both welcome for its focus and occasionally hard to swallow for its polemical approach to its subject. The title track is a grating mixture of militaristic boom bap and harsh electric guitars over methodical drums that allow N.Y.Oil the freedom to experiment with his flow, which he frequently switches from a measured pace to double time and back with apparent ease. Lyrically, the track is a bombardment, making a convincing case that the thugs who populate MTV and BET playlists are hurting their community as well as faking the funk. His daughter even makes a cameo appearance to indict these rap phonies, declaring:

“You think you hard-bodied?
We know what you’re about
We’re from the same hood
Why you sellin us out?”

N.Y.Oil chimes in with his own attack on these perpetrators (“Little Sambo shuckin and jivin, Super-Sizin’ and lyin / not realizin this compromisin got people dyin”) before his daughter returns to plead, “Stop sellin us out!” “A Quick 16” is a spoken word piece that further drives the point home, spinning a compelling narrative about a neighborhood drug dealer whose attachment to the game gets the better of him in the end. It’s a stinging tongue-in-cheek analogy for the wannabe gangsters of the rap world who can’t always handle the consequences of their outlaw personas, and on top of all that, it is deftly written and delivered by an MC who is clearly in command of his own image:

“I’m bout to drop a quick 16, nahmean?
Ounce after ounce, ’til the pound is bounced
And I’ma work that block and pound it out
And though my ears ring out with resounding doubt
I was down and out and now I’m bout it bout
Bout to shout it out, I got that, copped that
And if the cops cop, then I’ma cop a plea
And if the plea don’t set me free then I’ll plead
On my hands and knees and beg God please to stop that
You see these pigs turn wolves to rats
And while these dogs chase cats, these cats forget where they gangstas at
See I was gon’ drop a quick 16 on ’em
And though I was wishin to do a little snitchin
My 16 wasn’t convincin, plus the DA had a bad day with a mind for convictin
I only wanted to sell a bit and celebrate
But now I’m celebate behind bars and gates
Tryna monkey around in the yard with weights
Them gorillas heard I turned state’s
I better drop a quick 16 on ’em
But my verses was worthless â€“ nouns versus verbs is nervous
Meanin I’m talking things, persons, and places
To Action Jacksons with scar faces
Who spit straight razors and turn box springs into erasers
They fixin to drop 16 on me
And before they let go, I tried to scream for the CO
But the CO, he ain’t see so…
Well, I think you know how the rest go
And that’s my 16″

The crown jewel of these righteously angry tracks is easily “Y’all Should All Get Lynched,” a song with enough strength to have secured N.Y.Oil’s reputation even without the accompanying video. DJ Slice serves up a delectable vocal sample with some pensive sustained organ notes all over a sauntering drum beat. The effect of the music is the same as that of the lyrics, making the song a tour de force of thought-provoking material that succeeds even as it occasionally veers away from what most hip hop heads would find easily palatable (more on that later). Suffice it to say that this one lives up to the hype.

Although the weight of his attack on commercial rap is such that it commands most of your attention, N.Y.Oil does provide a number of songs that deal with different topics, and it is all to the good. The best of these come early on and center on hip hop itself, specifically on the culture’s many (and decidedly old school) symbols of innovation, from “cardboard boxes spread over concrete” to the “big black ghetto blastin boombox with the twelve D batteries and the double cassette.” DJ Mosaic laces this one as well as “Purrrfect Beat,” a track akin to Pharoahe Monch’s “Rape” in its personification of the beat as a woman but with a much milder approach to the subject. Producer Speek Green’s “Shout It In the Streets” features a funk bounce complete with twangy guitars and clanking cowbells which give N.Y.Oil the room to flex his lyrical muscles against the larger system at work behind much of the cultural buffoonery he so often decries. When he warns, “The prisons is big business and you’re slave labor,” you get a glimpse of what might be possible from the man if he were to take to task the power structures even half as much as the puppets they dangle in front of us.

Sadly, the album doesn’t finish nearly as well as it started. A number of half-hearted tracks about women â€“ the good, the bad, and the ugly â€“ fail to capture the same intensity as his rants about hip hop. The repeated whining about “stinkin-ass broads” also gets a little old, especially when his normally airtight analysis devolves into the following advice to women who try to use their sexuality to gain the upper hand with men: “When that ass and them tits start to drip drop and flop, the control begins to stop / And them brothers is off to greener pastures.” Titling the song “You’re A Queen” only reinforces the mother/whore dichotomy that underscores so much of this discourse in hip hop as a whole. It’s not that he doesn’t have a good word for the females â€“ he certainly does, as he occasionally analyzes the complex situations that give rise to difficult situations for the fairer sex â€“ but his pleas on behalf of women aren’t nearly as convincing as his complaints against them, so that, at least on this particular issue, he falls squarely in line with mainstream rap.

The last few songs redeem the end of “Hood Treason” and bring it back to the heights at which it started. “Misery Loves Company” weaves together stories about how jealousy breaks apart relationships, effectively illustrating N.Y.Oil’s narrative abilities. “I Tried” follows a similar pattern over a plodding beat of piano glissandos and soul vocals by D Middlez, and it succeeds except for the subpar hook. With “What Up My Wigger Wigger,” N.Y.Oil returns to his bread and butter, sarcastically spouting a stream of racial epithets to make a point about groups other than blacks using the N word. His choice words for whites who try to be down but are only “conveniently black” are particularly biting, and they capture the issue damn near perfectly. The self-affirmation of “Unreal” is a strong ending as well, but “What Up My Wigger Wigger” is so potent that it feels like “Renegade” off Jay’s “Blueprint” â€“ it’s hard to listen to anything after it, and the album probably should have ended one song sooner.

The second disc is quite strong in its own right, but it is diluted by excessive skits of various artists endorsing N.Y.Oil, which appear after almost every full song. He has certainly lined up an impressive group of supporters, but their ubiquitous presence on the bonus disc limits its appeal. That said, there are some gems here. “Soldier (Somebody Is Lying)” featuring Chuck D is an intense first person account of the war in Iraq complemented by Religion’s hard-hitting electric guitars. The duet with his daughter on “Meanay” bangs hard thanks to a predictably soulful beat by 9th Wonder. Perhaps the most powerful track isn’t even a real rap song but a spoken word piece called “I Just Met My Father.” On it, N.Y.Oil once again proves his deft touch at getting to the heart of hopelessly convoluted problems, in this case attacking head on the absence of a father figure and the cyclical nature of the problem, as one generation of absentee fathers begets another. It is a moving piece about loss, anger, and forgiveness, and it encapsulates the heart of N.Y.Oil’s massive potential.

“Hood Treason” is a challenging, sprawling album in its single disc version, and it is even more unwieldy with the bonus disc. This ends up working well for N.Y.Oil, though, whose knowledge and unique take on an array of issues are given full rein in this format, resulting in a captivating album full of thoughtful lyrics matched with emotional musical backing. Much of what he has to say is hard to swallow, and few will likely agree with everything he spouts, but the courage of his convictions is so evident that it’s easy to forgive. Consider this one essential listening.