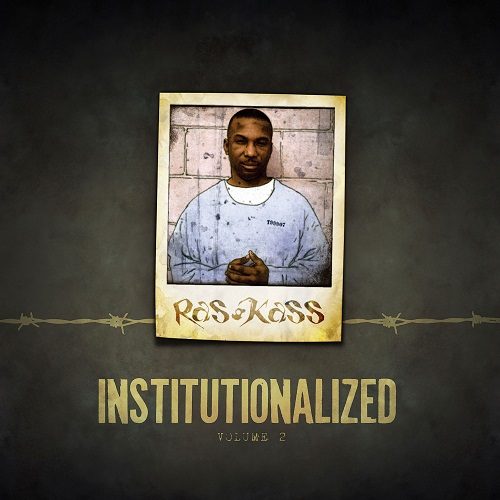 Trying to figure out John Austin’s legal status, record label status and album release status are all equally frustrating. I’ve still got Ras Kass slipmats from Priority dating back to my days as a college DJ, but as nice as it was to put them on the wheels of steel it’s frustrating to think now that they locked him up as much or more than any penitentiary system. Austin seems to be constantly losing legal battles, whether it’s to get out of a recording contract which ought to have been absolved when Capitol Records absorbed Priority, or to stay out from behind bars for violating probation by going to the BET Hip-Hop Awards in Atlanta last year. If one can even begin to make sense of why Ras Kass doesn’t have his freedom in either case, it only gets more confusing when trying to ascertain why this new album “Institutionalized Volume 2” can legitimately be released or what the FUCK happened to “Institutionalized Volume 1” – I sure as hell haven’t seen it. At least listening to “Behind the Musick” I can hear that Ras Kass is just as frustrated with the bullshit in his life as I am:

“One minute they hate you, next minute they love you
Next minute it’s FUCK YOU, then they forget you
Think I’ve figured out this hip-hop shit
Hypocrites put you on a pedestal, just to kick you down that bitch!
Magazine writers misprint you, take words out of context
And got the nerve to wonder why I’m vexed
When I read the publication…
I was like, ‘Damn was we in the same conversation?’
This for the rap conniseurs, magazine critics
Backpackers, rap stars with bullshit gimmicks
Fans, even the Stans, the groupies and label executives
with corporate cards trickin my budget on coochie
Video chicks suckin dicks between takes
Hopin to get saved, and thanks for the ass shake”

That’s how it goes in the rap music industry for any artist trying to get ahead, but for Ras Kass it’s always been one step forward and TEN steps back. Still considered one of the best lyricists and vocalists in the game despite having debuted over 12 years ago and having more albums shelved than released, Ras Kass is fighting the never-ending uphill battle for his name recognition to match his critical acclaim. Ras has often blamed a shitty record contract both on and off wax for his situation, but at the end of the day he’s still the one who signed his name to it. It’s hard to imagine that anybody cares about that contract any more, even if he wasn’t able to get it dissolved, although nothing suggests that John Austin finally won a court case or that Babygrande Records purchased whatever was left of it from whatever was left of Priority. Nonetheless here we have a new album, full of fire and brimstone and righteous indignation, and a one-sheet accompanying the album that explains jack shit. It talks about how he’s worked with everybody from Dr. Dre to RZA, skips over 98% of what happened to him in the last ten years, and tells you that “Institutionalized Vol. II” will be in stores on August 5th. That’s it.

The production on this new and APPARENTLY legit Ras Kass album is a mixed bag. Ski is symphonic and quite Kanye-like with the strings and samples on “Eyes Don’t Lie” and it works nicely. Frequency helps Ras Kass get braggadocious on “I’m All That” with a bouncy track, Sega gets heavy metal and turns Ras into an “Ironman Thug” and “Ups and Downs” features Ras collaborating with the late great Proof over a hard-hitting beat by Da Riffs. On the other hand there are a lot of tracks that just can’t match up to Ras Kass’ lyrical ferocity, a problem he’s had for almost his entire career. Mr. Lepht should exit stage right with whatever he came up with on “Try Me,” a track that’s technically sound and entirely boring – although Ras slow-flowing over it doesn’t help much either. Tony Roc’s “What it Might Be” would be a good showcase for newcomer Wais P, but both he and this song should have been reserved for mixtape status. He fares better on “We Go In,” a track which reverses and flips up the disco sound, but the beat would probably become monotonous without Ras spitting on it.

For better or worse Ras Kass seems to have toned down his flow on “Institutionalized Volume 2.” Some of it can be seen as a sign of lyrical maturity, knowing that not every line has to be a punchline (see also Chino XL) but some of it also comes across as Ras being beaten into submission by the system. At times he sounds tired, in fact LETHARGIC in his delivery, seemingly phoning it in knowing there was little chance the album would be released and even less he would be free of incarceration in time to see it. Despite how hopeful the brash, arrogant and merciless lyrics of “Behind the Musick” make me feel, the actual Behind the Music special would end in tragedy as one of hip-hop’s greatest rappers to never be given the recognition he deserved slowly, silently and painfully faded away into obscurity. I’m just hoping “Volume 2” isn’t the last chapter in Ras Kass’ book.