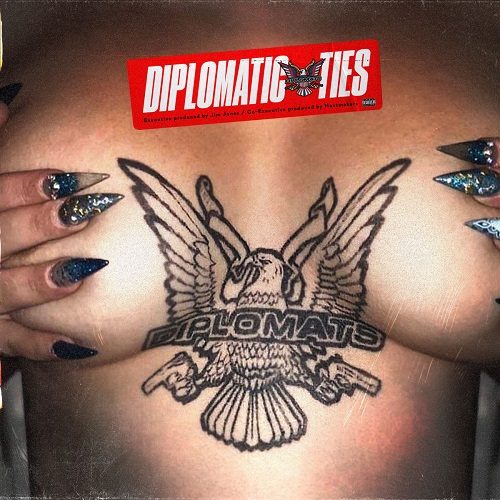 It’s been more than a decade since the Diplomats released an official group album. At their peak, the Cam’ron-led Harlem quartet kept one foot steeped in the mixtape market while the other foot was in the big leagues of the major-label industry. Their debut, the “Diplomatic Immunity” double album, wasn’t a critical darling, but certainly a fan-favorite. With the Heatmakerz handling the majority of their production, Dipset became just as known for their sample-heavy beats as they were for their James Bond-esque one-liner lyrics. They expanded by the time of their second album’s release to include rappers 40 Cal., Hell Rell, and JR Writer. Though considered by some to be the group’s second stringers, the three proved to have more hunger and more lyrical abilities than most of the starting line-up. In the years since, the group has gone through drama, label changes, in-house beefs, legal troubles, and other events that have reduced them back down to a quartet once more (Cam’ron, Juelz Santana, Jim Jones, and Freekey Zekey). With “Diplomatic Ties”, this is the group’s attempt to make a return back to form while adjusting to hip-hop’s current climate. Frankly, I don’t think they succeeded in either case.

The topics of the group’s lyrics have usually consisted of anything from ersatz crime tales, lavish lifestyles, or sexual escapades. While “Diplomatic Ties” doesn’t deviate from those topics, the length at which this listener has grown accustomed to hearing those raps has been shortened tremendously: The album consists of only nine tracks. The Heatmakerz have also been brought in to provide the beats and the album opens with “Intro: Stay Down”. A minute in, and it becomes readily apparent that not much has changed with these rappers since the mid-2000s. Jimmy maintains his going-for-broke smug ghetto elegance, Juelz Santana still has his cocky swag even with his impending two-year prison sentence, and Cam’ron? His voice has become throaty and sounds like he’s merely emulating, not embodying, the confidence he displayed in his lyrics long ago. In the intro, he re-ignites his old grievances with Kanye West, much to an eye-rolling response.

The intro is followed by “Dipset Forever”, which is ironic because Cam’ron’s 2004 album “Purple Haze” contained a song called “Dip-Set Forever” which was produced by Kanye West. I don’t know if it was meant to be a jab at Mr. West, but the unhyphenated version was done by the Heatmakerz who built the beat from a Queen sample. Since “Bohemian Rhapsody” was released in the theatres, Queen songs have gained a resurgence in popularity (in commercials, TV shows, sports events, et. al.). Though hip-hop producers have sampled the group for years, I feel that the timing of “Dipset Forever” is following the recent aforementioned trend. Additionally, the song reconfigures Freddie Mercury’s voice into a multi-tracked faux-anthem of a thousand voices chanting “who wants to live forever” all at once.

Taking a break from recapturing the glory days of their production, the group tries to adopt current rap trends on “On God”. It contains a standard 808 trap beat and a sung hook, but the fact that the rappers frequently yell out “SKRT!” in reference to their rides and Belly tries to mimic Drake’s singing/rap style reminds me of those older brothers who try to pepper their dialogue with current slang in order to convince their younger brother that they’re cool. The only track on the album that’s a true flash of Dipset’s old style is the first single “Sauce Boyz”, as it drips with a soul sample. The gangs of New York unite on “Dipset / LOX” over a crunching guitar sample, but it’s Jadakiss who remains the show-stealer between both groups:

“Ah, niggas lettin’ the lead go (Pow)
Mighta thought he was +Drew+ the way he +bled so+
All on Instagram live lettin’ the Feds know
Now you inside writin’ books, lettin’ your dreads grow (Uh)
One hell of a run and we still runnin’ (Run)
The money’s on climax and still comin’ (Yeah)
When your account start changin’, you feel somethin’ (Yeah)
I used to window shop, now I could build somethin’ (Yes)
Buy a lot of kicks and love to gamble (That’s it)
My SUV is the new Lambo (Turbo)
Politics is gettin’ serious (Haha)
Diplomatic immunity, +Livin’ Off Experience+”

The remainder of the album isn’t anything to write home about for the most part. The trap beat usage continues on both “By Any Means” and “No Sleep”. Both have dull 808-created beats and the latter features Tory Lanez, who I cannot take seriously on account of the fact that he unwittingly bit his stage name from that of a fetish model/pornographic actress. Additionally, “Uptown” is an interpolation of “Bucktown” by Smif-N-Wessun and reminds me of the recent “Ocean to Ocean” song by Pitbull which is a complete and abysmal interpolation of “Africa” by Toto (from the beat to the hook). The outro is done by Dipset affiliate Un Kasa. Lyrically, he’s better here than the rest of the set and this is his only appearance on the album, boldly proclaiming “lyrically, I’m the gun that killed Kennedy.”

Personally I gave up on any hope of Dipset reunion long ago. I figured that the group’s internal strife snuffed their flame for good. “Diplomatic Ties” received its buzz solely because of the idea of a Dipset reunion. The album could’ve worked if it didn’t rely on rehashing old production styles, caving in to popular trends, and would’ve sounded better if former members were brought back into the fold. While there may be a dim bright spot, “Diplomatic Ties” is just proof that the members need to hang their mics up as a group because the concept of Dipset is done.