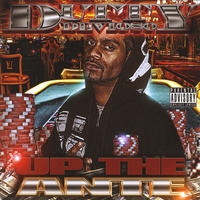 Dutty Devioso :: Up the Ante

Dutty’s bio is a little different in that the opening sentence of his press release, you learn that he is the product of a professional family. He attended the prestigious Howard University on a football scholarship. It was at Howard that he found the connections that would usher in his entry to a hip-hop career. Dutty Devioso continues the string of luck I have with albums by artist from Louisiana (his home was Baton Rouge): they just always seem to be a bit better than the average Southern album.

Dutty marries a flow that owes quite a bit to the East Coast to Southern music production with a nod to a more recent production style, along with an older style popularized by UGK and Eightball and MJG. Dutty also possesses a rather strange voice that I cannot quite put my finger on. His voice is different in the same manner that Lil Wayne’s voice is different: it would be irritating if the owner did not know how to use it right. In other words, if his flow was utter garbage, you would be reading a very different review right now.

Dutty does not break any new ground with this album. You are not going to hear a lot of quotables. He sticks chiefly to the usual suspects in hip-hop: strippers and hoes (“Tippy Toes”, “I’ll Give U Dat”), drugs (“Fish Grease”), the ubiquitous mentioning of dances (“2 Step”), and haters (“Fuck Yall”). It is inescapable, but the key is how well they do it that keeps it fresh. In many ways, Jay said it best when he exhorted as to how we love this “Ignorant Shit”. The trick is finding rappers who can find ways to deliver said ignorance in a way that does not offend your intelligence. Fortunately, he is nice enough behind the microphone that you will not find yourself losing hope for the music while his is bubbling through your speakers in the background.