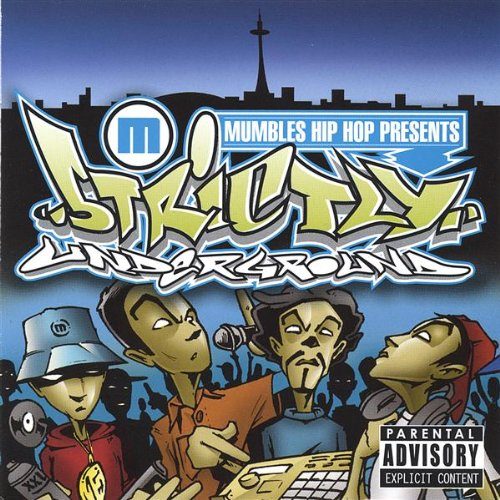 The massive, rapper-packed compilation is a concept that is inherently flawed. With so much material packaged so tightly together, there is a guaranteed sense of overkill, as well as the potential for a ton of mediocre material. Essentially, these releases reverse the term “quality over quantity.” Some are done better than others, but the possibility for a truly excellent record is nearly always lost in the rainbow of voices and their intentions. The most irritating moment for me comes when I hear an especially nice track from an artist who does not appear elsewhere on the disc. The opportunity for someone to get in a groove is nonexistent.

Rants aside, there is a reason that albums like this keep getting made. These situations always foster a competitive environment, and if I were making a song that I knew would be included in a compilation, I would try my hardest to represent myself well. In this case, the Mumbles Hip Hop label is releasing a “Strictly Underground” compilation, so it is safe to assume that there are a lot of hungry artists lined up to record.

The record opens with Fenaxiz rocking over a smooth self-produced cut laden with quiet horns. “Pieces of a Man” is fairly inauspicious for an opener, but the subdued combination of vocals and production is a pleasing introduction. “New School Leaders” follows in a similarly relaxed vein, and Shad proves himself a steady voice, only to disappear after a promising performance.

As the record moves forward, the number of solid tracks piles up. The only true standout in the early part of “Strictly Underground” is “Spread Your Wings” by Freestyle of the Arsonists, which relies on heavy orchestral undertones and inspirational raps from Freestyle that avoid clichÃ©. I struggle with my frustration at the fact that every song is good, but with few exceptions not especially memorable. It is clear to me that most of the rappers showcased here are intelligent and eloquent enough to be given more shine, but they all get lost in the shuffle a bit. Milk Crate, for example, sounds lovely on “Never Fake Moves,” but he is not commanding enough to dominate a solo track, and Iâ€™d prefer to spend a lengthier time letting him explain himself to me.

The production is brought together in compilation form as well, with a long list of contributors. The musical choices being made here can be categorized as “safe,” relying on old staples to paint the sounds throughout. Nearly every track is successful in the sense that the music is professional and always pleasing, but there are very few songs that feature truly indelible production.

The best song on “Strictly Underground” is “Who Does That,” a collaboration between Phatkhat7 and 2Twyst. As random as it is amusing, the concept is essentially to think up many arbitrary ideas and then say “who does that?” Aside from the success of the odd humor they employ, the song exists as a break from the monotony of deadly-serious topics that surround it. There is a lot of introspection as well as serious perspectives that are not always compelling, and “Who Does That” is a necessary addition to the middle of the disc.

There are twenty one full-length songs from artists looking for their moment, so listening to this record is a full and slightly monotonous experience. There are dozens of musicians compiled here, and they all seem worthy of more time. Because none of them are immediately riveting enough to steal a whole song, there is a distinct lack of true bangers. If you are looking for an adequate, occasionally magical cross-section of a Canadian underground scene, look no further.