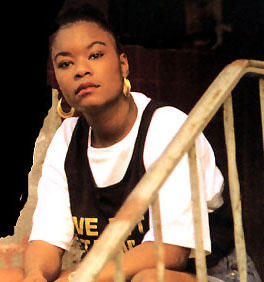 Did you know that 2008 is the Year of the Hip-Hop Women? I for one didn’t until I heard that Roxanne Shanté was coming to town, an event that simply required my attendance as a longtime fan. While looking up details of the show I noticed it was a stop of the We B*Girlz Tour 2008, which led me to www.bgirlz.com, where I found an interesting press release detailing purposes and goals of the declaration. It starts as follows: Powerful, intelligent, self-respecting women in Hip-Hop do exist. They’re on the microphone, off-camera, and behind the scenes. They hold significant positions at the top echelons of the industry’s professional food chain. They are anonymous shining stars. Why don’t we know about them? Because they are silently tucked away due to a lack of media exposure, male-centric programming, and adverse images that present a onesided perspective of women in Hip-Hop.

No objections here. The actual real-life relationship between women and hip-hop is likely not always that complicated and continues to work despite all the obstacles we are all familiar with, b-girls from firsthand experience. As demonstrated by the We B*Girlz Tour, which presents a line-up that reflects the diversity of female identities in hip-hop. Starting with the We B*Girlz Festival held last month in Berlin, the current 16-date tour through Germany, Switzerland, Scandinavia and the Czech Republic has seen artists such as Bahamadia, Eternia, Yarah Bravo, Invincible, Roxanne Shanté, DJ Shortee, Stacy Epps and Chela Simone share the stage.

The Friday 5th September show in Berne, Switzerland, featured Bahamadia, Roxanne Shanté, Invincible, Stacy Epps, DJ Shortee as well as local ladies DJ Sassy J and rapper/beatboxer Steff La Cheffe. After a warm-up of the hometown crowd from the latter, Stacy Epps and her drummer (the only man on stage during the entire evening) took the stage for a spaced out and soulful set. The Georgia native evenly divided her performance between singing and rapping, spreading the vintage message of peace, unity, love, and having fun both with the intensity of a soulstress and the immediacy of a b-girl. Highlights included “Floatin'” with its dreamy “Floatin’, floatin'” hook and well contrasting rap verses that brought things down to earth, and her heartfelt invitation to join the “Mothership.” She also performed her track off “Madvillainy” and paid her respects to space age funkateer Sun Ra. With her open-arms approach Stacy Epps was a highly suitable opening act, giving a strong example of the many things women have to offer in hip-hop. She was especially successful in getting her message across to the foreign audience.

The reason I have never heard of DJ Shortee from L.A. isn’t that she’s female, but simply that I’m ignorant to the modern DJ scene. Her set was brief and to the point, and she controlled the decks until the end of the show. Detroit resident Invincible was up next, and if I hadn’t read about her album on this website I would be hard-pressed to say what she’s exactly about. She made contact with the audience to the point of joining the first rows and incorporating crowd suggestions into one song but her delivery lacked energy and clarity. At this point Invincible seems to be one of those artists you have to familiarize yourself with first to fully appreciate her live performance. One thing however was clear – she got herself some nice beats to rock. As confirmed by repeated listens to her “Shapeshifters” album since.

Regarding the next performer, this reviewer was well familiar with her material and couldn’t really find the time to check if the same was true for younger members of the audience. I thought that Roxanne Shanté had hung up the mic in favor of a career in psychology, but there she was, cocky as ever, going through her hits without missing a beat or breaking a sweat. Early on there was “Bite This,” followed by “Live on Stage,” “Have a Nice Day,” “Go on Girl,” “Yes, Yes, Y’all” and “Brothers Ain’t Shit.” Introducing “Big Mama” with “I wouldn’t be motherfucking Shanté if I didn’t do this one,” she made it clear that she stands a hundred percent behind her stage name and what it represents. She also repped Queensbridge and the Cold Chillin’ days with brief renditions of “The Bridge,” “R.A.W.” and “Just a Friend.” (Here’s wondering if Shan, Kane or Biz would think of including a Shanté song in a similar retrospective.) Rox performed with the attitude of a rap vet who doesn’t have anything to prove, and while that befits her status, she missed the opportunity to address the audience on the subject of women in hip-hop from the perspective of someone who dove head first into the battle of the sexes at a very early point in hip-hop history. But neither did the other acts, which gave the event a refreshing show-and-prove spin instead of a stale show-and-tell touch. Case in point: Shanté had local b-girl Steff La Cheffe do Biz Markie’s beatboxing part in “The Def Fresh Crew,” a song recorded before the young lady was born.

Philadelphia’s Bahamadia closed the show with a surprisingly powerful performance. Knowing her only from her records, I expected a vocalist that would be almost too soft-spoken for a live setting. But homegirl took command of the stage right away, spitting her lyrics in an unwavering stance, as if facing an unseen opponent. She paid tribute to the golden age with her version of MC Lyte’s “Paper Thin,” but unfortunately I can’t reproduce her set list even roughly. She either performed new material I’m not familiar with or it’s been too long since I listened to “Kollage” and “BB Queen.” Still I missed songs like “I Confess,” “Total Wreck,” or “Spontaneity,” while “True Honey Buns” and “UKNOWHOWWEDU” were kept rather short.

The We B*Girlz Tour 2008 is a fascinating affair that I hope can take place under similar circumstances in the motherland of rap music. It shows that pioneers like Roxanne Shanté and Bahamadia still have the passion to rock the mic even though it’s been a while since they’ve added to their discography. To witness Shanté especially perform at an alternative youth center in a relatively small town and still be professional about it was a sight to behold. To think that this wasn’t an old school event and also featured young, skilled and idealistic female MC’s and DJ’s was enough not just to restore my faith in female rap but in hip-hop period.