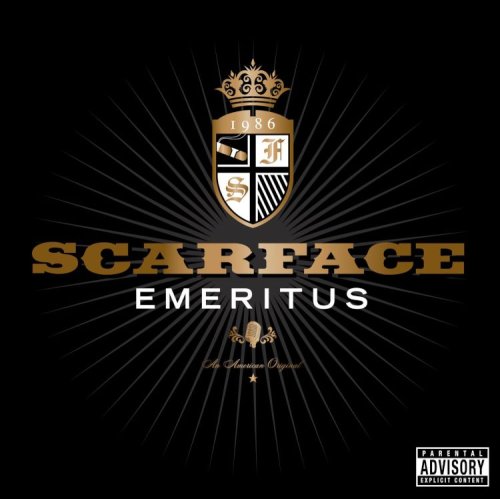 At some point even words like “legend” and “icon” seem insufficient to sum up the career of Brad Jordan a.k.a. Scarface. In fact, a recording career itself seems insufficient. Scarface has both pioneered and dominated the Southern style of gangster rap for 20 years, and when someone dominates so thoroughly for so long you usually picture them moving on to new endeavors. Hollywood hasn’t beaten a path to Mr. Jordan’s door for an acting career other than a brief part in a Mike Judge comedy/social satire film. Don’t give me that “he looks too menacing” crap – Ice Cube is making PG movies these days. Appearing in a couple of Def Jam video games isn’t the same either. Scarface is an O.G. who has never really cashed in to a large degree, which might lead you to think he’s just going to keep his status as one of the most revered rappers in the game today and keep on rolling.

The problem with that theory is the title of Scarface’s new album – “Emeritus” – an adjective used to create an honorary title for THE RETIRED. From college professors to Senate majority leaders, “emertius” means you are recognized with a title for the work you’ve done even when you are no longer there doing it. There’s more than a bit of spin involved when you think about it, as being emeritus entitles the so-named to sound and/or FEEL important even if they’re not active any more in their profession. As such the title is both an honor recognizing one’s importantance and a dubious distinction marking one’s irrelevance all at the same time. That doesn’t seem fitting for Scarface. He’s certainly as worthy of being honored as any rapper in the last quarter century, but to be O.G. Emeritus of rap would mean he’s putting down the mic and calling it a night. He’s hinted at the possibility in interviews, but it just doesn’t seem to make sense since there’s not really anything for him to do next. What does life hold for the “Emeritus” gangster rapper known as Brad Jordan, DJ Akshen and Mr. Mr. Scarface?

There will be time for more conjecture on the subject later. First there’s the matter of the album “Emeritus” itself to attend to – 14 tracks in total, 12 actual songs when you don’t count the “Intro” and “Outro.” In fact to be perfectly honest the four minutes and change of the opener are rather irritating, as we sit and listen to Rap-A-Lot CEO J. Prince air his grievances about a criminal prosecution in Houston. To be honest this tarnishes the “Emeritus” adjective before Scarface can even receive it, because Prince is taking up valuable time with his personal drama instead of honoring the rap legend who made him and his record label so much money over the years. If he really wants to drawl slowly over vaguely Godfather-esque instrumentals, tell him to release a J. Prince album and do it on his own time. Oh that’s right – NOBODY WOULD BUY THAT SHIT – that’s why he stuck it on Scarface’s CD. I hope he beat the case but he gets no props for an intro as exciting as watching grass grow.

I’m torn by the follow-up track “High Powered” featuring Papa Rue. I’m normally a fan of N.O. Joe’s production but this song strikes me as a bad ripoff of Lil’ Jon combined with a bad ripoff of the simplstic stylings of Soulja Boy. Drum beats which should resonate and reverberate sound flat and muted, and the tom tom drums ring like empty paint cans being hit with tree branches. Yuck. The problem is that Papa Rue’s singing on the chorus is still tight and Scarface can spit a good rap even over a completely mediocre beat:

“Real nigga he don’t talk about it he be about it, cause he a G about it
I got a problem with a nigga I go squeeze him out
And what the fuck am I gon’ talk to the police about?
I’m from the streets doin the type of shit you read about
I got chrome 45’s under pressure, and in the dresser
And now you’re froze on the stretcher
You wanted trouble, I wouldn’t settle for lesser
I’m the devil in the flesh, my pistol is my protector”

Thankfully things improve on all fronts with “Forgot About Me.” This is the kind of epic song that Scarface needs to establish his credentials for first time listeners and to reaffirm it to his long time fans. Cool & Dre bang out one of their best beats today, thanks in large part to some really well chosen Billy Paul samples, and the South’s finest get their shine on as Lil Wayne and Bun B drop by to drop guest verses. Even though they form the sandwich holding this song together, Scarface has the cheesesteak filling that’s fat and delicious to the ear with every musical bite:

“I’m the o-riginal gangsta, I’ll tell you how I do it
I take niggaz from the jump when they step to me with that bullshit
I am a fool, bitch, a native H-Town from the south side of Houston
You’re tuned to the sounds of a nigga, who don’t give a fuck
Cause one way or the other
I’m gon’ still get mine, play the game, motherfucker
The truth is in the building and I came tonight
And I done sold so many records, change my name to life
’cause I can breathe into the hood, make it feel my pain
And even though they try to change me, I remain the same
And even if I did have that chrome-plated grill on my shit
I come from out the motherfuckin bricks
Now, never forget, where I come from, son
I’m respected in these motherfuckin streets I run”

From this point forward “Emeritus” is largely consistent with the quality of the third track and not the annoying parts of the opening two. “Can’t Get Right” featuring Bilal floats lovely over gangster piano and organ keys from Nottz, as both ‘Face and B ponder how you can go good where gas costs $5 a gallon and you can’t afford your prescriptions. This may date the rap a bit since gas is now under $2 a gallon (in some places under $1.50) nearly everywhere in the United States, but the larger point is still valid – it’s easy to do right when you can AFFORD to and your life’s not on the line. Nottz comes through again on “Still Here,” a song chock full of flute notes and 70’s soul mixed with Scarface’s rap and a clever reference to Ice Cube’s seminal classic “Dead Homiez”:

“Up early in the mornin, wakened by the sound of my cell phone
Donny Hathaway sangin on the ringtone
It was a homie that I went to school with
Tellin me life wasn’t shit to fool with
These young niggaz steady dyin over dumb shit
Fast money for your soul, now you’re done with
You hear the gun click {*BLAM*}
… blood stains on the walls and carpet”

At this point I might resort to the cliched phrase “other standout tracks include” and give you a brief synopsis of the rest of the songs on “Emeritus,” but that just won’t do here. I can’t say “other standout tracks” when they’re ALL standouts. “It’s Not a Game” may be the best Dr. Dre track that Dr. Dre never produced, so give Illmind a gold star for so taking the style and banging it out his own way. He also laces up “Who Are They” featuring K-Rino and Slim Thug, two of the most consistently underrated rappers in the Dirty South. “Soldier Story” is a haunting tale with Z-Ro’s singing on the hook pulling together sterling verses by Scarface and The Product into a tight package. N.O. Joe redeems himself on “Redemption Song,” a track which could have easily ripped off Bob Marley based on the title but instead has more in common with a stripped down East coast RZA style beat. Jake One’s work on “High Note” is so epic I can’t even do it justice with words, except to say that it may be the most aptly titled song on “Emeritus.” Both “We Need You” and “Unexpected” feature Wacko from UTP, another crew in the South that needs more shine. The title track may be the one that surprised me the most. Coming second to last on the album, the song features the unlikely combo of Scarface on lyrics and Scram Jones on beats, but like a salad with dried cherries and grilled chicken the seemingly incongrous tastes go together perfectly:

“That’s the type of dude you’re listening to
Talk to you for a minute then I’m trippin with you
And since you want it with me I’ll position them goons
They carry out the order to this mission and boom!
You’re out, now what was all the chit-chat about?
A word from the wise, keep my dick out your mouth
Apparently, I’ve been too lenient on dudes
Cause you niggaz done forgot who these streets belong to”

No one will forget after “Emeritus,” an album that proves Scarface deserves accolades and titles just as much as we deserve for him NOT to retire. Not only is he still one of rap’s hardest, he’s also one of its most cinematic narrators, and often one of its most thought-provoking. The game needs ‘Face more than he needs it, but here’s hoping he’s not really ready to quit.