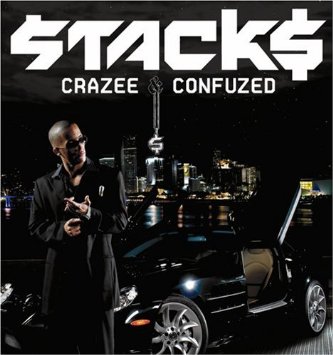 Flash back about three months ago: it’s a rainy day while on vacation and I’m cooped up in my room with nothing better to do than watch a re-run of MTV’s “Hogan Knows Best.” Brooke Hogan’s having some kind of house party and the episode revolves around her former relationship with some T.I. lookalike named Stacks. And of course now, the irony is obvious, I have an album in front of me by an emcee named Stack$.

“Crazee & Confuzed” isn’t gangster rap and it’s not alternative hip hop; its subject matter mostly pertains to making money, sex, alcohol and drugs. It’s pretty easy to tell Stack$ isn’t from the hood so it’s at least a relief that he’s not pretending (word to Ja Rule and the Bauce). Unfortunately, he shows almost no personality and provides little reason to remember his name after the tracks end.

In fact, the album’s standout verses are from elite guest rappers Twista (refreshing to hear, as he hasn’t really made noise in a few years) and Featuring Lil Wayne, who warns “Mr. tough thug don’t start with me // I’m a painter, and blood is an art to me.” As with nearly any album with a strict dedication to rather shallow subject matter, “Crazee & Confuzed” is hit or miss. The aforementioned Twista collaboration is effective, but is followed by the title track, an unconvincing case for the album name. “In My Zone” is one of the highlights, a pretty funny description of college parties whilst on drugs, that somehow manages to reference Macaulay Culkin. The worst composition on the album is far and away “That’s the Way.” Fat Joe and Trina accompany, dropping wack verses to an incredibly generic beat. The chorus (“that’s the way we like to fuck/suck”) is a feeble attempt at producing a hit.

In fact, despite contributions from Scott Storch and Swizz Beats, the majority of the album’s production is mediocre club music. The unexpected reggae cut “Flyin’ High” and the last three songs are the only form of relief from the boring beats, and “This, Then That” is the only one that really intrigues. Now I’m confident Stack$ is a better emcee than displayed on such an ordinary record, but this is more or less a failure at quality mainstream party music.