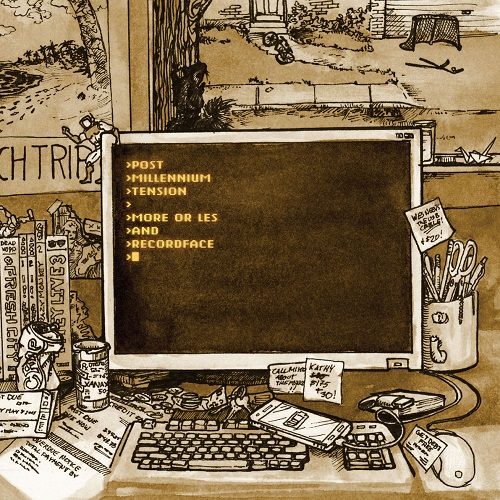 I couldn’t help but think of Deltron 3030 when I saw the album cover and read the title. As it turns out that wasn’t far off – although More Or Les and Recordface are talking about a dystopian technological nightmare that’s happening TODAY and RIGHT NOW and not in some far off year of sci-fi fantasy. “End of the World” gets right down to the nitty gritty about how our modern conveniences are ruining our lives.

“Why, is, it, ev-ery, single
piece of tech I own will function, under
optimal conditions of wi-fi signal, I get
supposed to be 450 megabits, it never gets
even closed to that; meanwhile, the, smart, phone
I own heats up like I need a pair of oven mitts…
Just cause I saw the blue screen of death
I was just trying to print, out, some, documents
in a pinch cause of a failed PDF
What a mess!”

I know everybody wants a “smart phone” in 2015, and I’m as guilty of being a social media whore as anyone out there, but I’m just old enough to remember an internet that didn’t figuratively and literally “follow” you everywhere you went, and technology seems incredibly more invasive than ever. More’s complaints come from an obvious enthusiast for the tech though, because to rap as authoritatively about the loss of privacy as he does about it on “Scotch Tape” he’d have to be just as guilty of overusing his smart phone as the rest of us.

The choice is of course to completely disconnect from society – abandon technology and phones, live in a cabin in the woods, hunt for your food and read books for your entertainment. No? Yeah I’m not going to do it either. It’s not that I’m not tempted when somebody tweets me and my phone goes off at two in the morning, but instead of abandoning tech I just learn how to set alerts not to go off while I’m sleeping and move on. I’ve incorporated the inconveniences because I am a sucker for the conveniences. It’s incredibly addictive to live in an age where between a tablet, a computer and a smart phone you can be entertained or shop or order a meal around the clock, but “Snowden” reminds us these conveniences come at a cost.

Here’s where I have to draw a distinct difference between “Post Millennium Tension” and “Deltron 3030.” Both albums clearly address the horrors that can be created by technology, whether in the present or in a far off future eerily like the present day, but Del became the protagonist of his story by turning the technology to his advantage. He presented himself as a cyber warrior, fighting for his rights and for everybody disenfranchised by the dystopia, unleashing computer virtuses to bring the whole corrupt system down. On this Hand’Solo Records release our protagonist is complaining without fighting back. He’s “more or less” accepted that this is just the way things are and will now be. This isn’t rebellion or anarchy, it’s “a story that never has a happy ending” as he quips on “Busy.” It’s creatively written and expertly gift-(w)rapped ode to griping. It’s like Jerry Seinfeld delivering a stand-up monologue about airplane food – he’s not satisfied that it sucks, and we laugh if we relate, but it doesn’t really change anything.

I’m not saying I expected More Or Les and Recordface to have solutions on “Post Millennium Tension,” and if they did 25 minutes wouldn’t be enough time to present them all anyway. I’m just advising you the listener to know what you’re getting into ahead of time. The beats, rhymes and scratches on tracks like “GeeArr” featuring Timbuktu are fresh, but the anti-technology rant is just that – a rant for it’s own sake. So long as it’s delivered in a musically enjoyable way that’s fine by me, and since I’m not going to give up my smart phone or delete my Facebook profile I’d be a hypocrite to suggest anybody really should – but perhaps we should at least debate the merits of our modern conveniences instead of simply complaining then blithely accepting the loss of our privacy and sanity as normal.