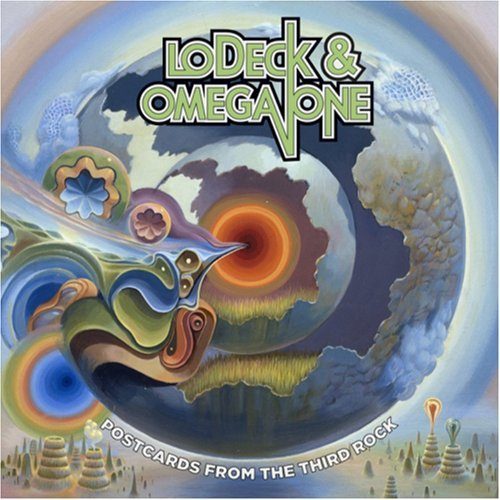 LoDeck & Omega One :: Postcards From the Third Rock

Let’s break down “Postcards From the Third Rock” individually by the two cats involved to start.

LoDeck is one of those rappers you may have heard of if you’ve been poking around in the backpack rap scene for long enough, but it’s highly unlikely. He’s underground even by underground’s standards, having done a lot of cameos and guest spots with the likes of El-P, Slug and Sage Francis, yet having two solo albums and an EP that you’d be hard pressed to find at even your most well stocked mom & pop independent retailer. That’s not to say the gruff voiced rapper doesn’t have a lot going for him, a Russian born rapper whose family emigrated to New York, landing him on the streets of Brooklyn in the heart of hip-hop’s meteoric rise to the mainstream. Stylistically he’s taken that environment to heart, sounding like a mutant mixture of Mr. Lif and R.A. the Rugged Man, taking only the best parts of both to create a strange mutant whole as an MC. It’s kind of odd that LoDeck hasn’t gotten more widespread acclaim by now, as his voice on “Postcards From the Third Rock” is a mesmerizing and hypnotic force drawing you into cleverly constructed beats.

Speaking of those beats, Omega One is definitely the better known half of this dynamic duo. His Lo-Fi Chronicles on the Nature Sounds imprint received high praise on this site exactly three years ago, and he hasn’t exactly rested on his laurels since then. He’s been producing for everyone from Vast Aire to I Self Divine, and DJ’ing at shows featuring everyone from Method Man to Immortal Technique. Omega One certainly isn’t afraid to experiment behind the boards on “Postcards From the Third Rock.” Influences range from Spongebob Squarepants on “A Day in the Triangle” to the dirty basslines and beautiful ivories of Stoupe the Enemy of Mankind or Alchemist on “Nice Kids.” The latter track is also notable for being a “posse all in” collaboration featuring like-minded artists like C-Rayz Walz and Invizzibl Men. Through the fifteen tracks of “Postcards From the Third Rock,” Omega One keeps things constantly interesting, throwing curveballs when you least expect with jazzy tracks like “Shrimp” and heavy electronic boom bap like “Still Cambodia.”

There’s only one thing that keeps me from enjoying “Postcards From the Third Rock” more, and it’s not the fault of either person involved. Because this album doesn’t OFFICIALLY drop until November 4th (even though Gracenote already has a tracklisting for it) the promotional copy sent to these offices for review has one of those annoying voices saying “promo only dropping so-and-so” periodically. This makes it hard to fully transcend into the otherworldly vibes these extraterrestrial Earthbound rap cats are trying to provide. I say OFFICIALLY by the way because that’s what the press kit indicates, even though both the jacket for the CD and the voice heard on it noting it’s a promo copy indicate August – meaning this already should have been out a while ago. Better late than never though I say, so when the first Tuesday of November rolls around make sure you find an online retailer or local merchant that carries “Postcards From the Third Rock.” It’ll be worth the wait.