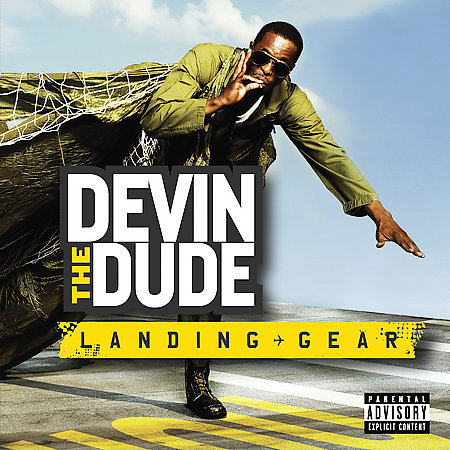 Even though generally speaking it makes no difference what label a rapper is signed to as long as they have the promotional skills and marketing muscle to ensure an album reaches store shelves, there are definitely “traditional” hip-hop labels like Def Jam and Rap-A-Lot which cater specifically to fans of the genre. That’s not to say said labels can’t be just as sheisty as any other major imprint towards a rap artist, but at least they understand the vibe and culture of what they’re selling, which can only benefit your album’s chances to succeed. As such I have to admit it caught me by surprise to see that popular Houston rapper Devin the Dude wound up on the Waitin’ to Inhale” successful and songs like “What a Job” featuring Andre 3000 and Snoop Dogg crossover chronic hits.

Devin’s fans will be happy to know he’s just as lackadaisical and smoky as ever on “Landing Gear,” even pantomiming a joint in his hand on the album’s cover, apparently needing a parachute to come down from his high. There are only a few things in life that Devin is chiefly concerned with rapping about, and if you’re already familiar with him you know it’s a short list – weed, pussy and beer. Chief among these is weed, but that doesn’t stop Devin from trying to work as many in as possible right on the P-Funked out opener “In My Draws”:

“Well, hello again my weed-smokin friends, I’m glad you came
With coffee in your cups, you fire one up, I’ll do the same
And you can pass it to someone you’ve never met
And let ’em get just as high as you
You’re eyes red as shit â€“ mine, too!
We about to start the show, who got an Optimo? A Swisher sweet
A zig-zag and bitch that’ll kiss my meat
This cordless mic, I know what they like
Continue to rockin the show that’ll slow up a fight
And I know of a dyke, who wouldn’t mind
Gettin’ some of this dick from behind BUT
I’m gonna chill, y’all
Cause she might wanna start wearin my drawers”

Even though the topic matter could be called limited, it’s the whimsical and charming way which Devin delivers his dope-fueled raps which keep things interesting. Cozmo’s piano-laced beat and L.C.’s chorus crooning on “I Can’t Make it Home” give storyteller Devin yet another opportunity to speak upon a night of fun gone wrong.

“I know I just left your crib but I’m ’bout to make the block and come back
It’s too hot over here, matter of fact
Police behind me right now and shit! I’m kinda bent
I’m glad I got tint damn I hope they don’t try to tow my shit
I should’ve chilled, though naw them Patron shots
See, I drink Crown Royal, that’s my drink knahmtalkinbout? But
Nevertheless, I gotta stay between the lines
Cause if I trip, then I dip, and if I swerve one more time
They gon’ be… ON MY ASS, LIKE WHITE ON RICE”

The caps in the above quotation indicate Devin spontaneously busted out his singing voice. Not many rappers can get away with that (and for the love of Cthulhu most really shouldn’t) but it tends to suit Devin’s naturally high vibe to a tee. Devin’s fans will also be happy to know that he linked up with the equally lackadaisical Snoop one mo’ time for another funky collaboration on “I Don’t Chase ‘Em,” as the two spit about their female fans and friends.

Snoop: “Big Snoop! We got all your CD’s
And we’ll do anything if you put us on yo’ team
Well aight bitch, I sell a hoe a quick dream
Then back on the road, so fresh so clean
Pimps up hoes down nigga that’s the theme
And when they choose up they get broke for everything
I ain’t mad at ’em; they just wanna be seen
Flossin with a boss a picture in a magazine”

Devin: “Sluts don’t get much, freaks I make ’em geek
like dopefiends on this pipe, yep this meat
Hoes they want clothes and shit, expectin me to unfold it
Oh no no bitch!
Off to work I go to the studio or another show
Some people spend dough just to see a brother flow”

It’s fair to say that if there’s one criticism of Devin that can truly stick it’s that he takes the “Dude” aspect of his personality very seriously, and in few songs will you see him regard women as more than just objects of his sexual conquest. Nonetheless songs like “Me, You” show he can still charm a girl or two, offering to share his coveted stash of Amsterdam weed with a fly lady who will accept his seed. Most misogynistic rappers don’t even try to be personable – they treat all women like bitches and hoes and just expect them to like it. At least Devin is self-aware enough to treat people how he’d want to be treated, even if he does sometimes come across a bit misogynistic. Nevertheless it’s easy to forgive just because Devin is such a funny, laid back and cool cat to listen to. Devin is that friend you’d give your last beer to even if you were broke, because you know he’d do the same thing for you. The label may not be a natural fit for Devin but if they got some drinkers and smokers in the Razor & Tie offices he’ll do just fine in the end. Put on your “Landing Gear” and jump out the plane, it’s gonna be another wild and fun ride ’til you come down from the clouds.