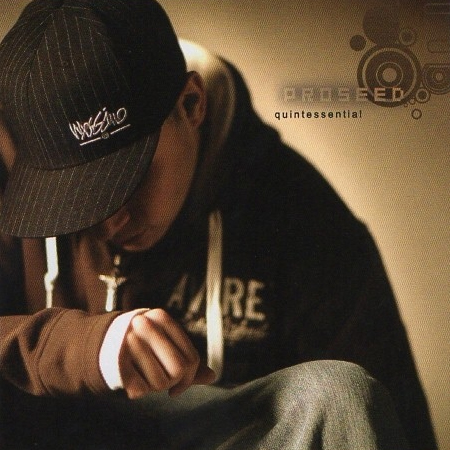 As a writer, producer, and emcee, Pittsburgh, PA’s Proseed is a one man show. Proseed has already opened for various Def Jux artists, as well as for famed emcees Fat Lip, One Be Lo, and Tech N9ne. With his past release of his mixtape “Caution: The Raw Classics” in the summer of 2006, Proseed now releases his album, “Quintessential,” that has been in the making since 2004. It has been a work in progress, as he is now able to unleash his brainchild in the making.

Now when an artist names their album “quintessential,” I am expecting to be blown away. We’re talking about the essence of music in its purest form and music that represents hip hop in its entirety. Through my eyes, this is what being “quintessential” is all about. With this in mind, Proseed’s “Quintessential” was not quite the representative music I was anticipating. Don’t get me wrong. Proseed displays some skills far beyond the next emcee, but at the same time lacks in a finished product and lacks in maturity. While listening to “Quintessential,” the recurring theme of the after effects of partying, drinking, drugs, and girls was beyond redundant as I hoped the next track would break repetitious cycle. On a simple beat, ” No Go” boasts about attempting to get have fun without getting entirely wasted. As Proseed attempts to deliver the track, the simplistic manner of his lyrics is the only thing I can focus on as he rhymes, “If someone shows up with a cold case of Beck’s, I don’t want to throw up I’m a say I’m all set.” Not quite the enlightening lyrics I wanted to hear from “Quintessential.”

Ironically, in “Boom Boom,” Proseed rhymes about avoiding all the negative things that he just discussed in “No Go.” He must be referring to all things in moderation? Not only does he boast about eluding negative influences as they will soon catch up to you, every other verse is followed by a rather annoying sound of Proseed calling out “boom boom” as if it were a sound effect. This monotonous track has very little insight and arouses no interest or curiosity. “Dedicated” is yet another monotonous track that follows the same uninteresting beat from start to finish as Proseed’s slow lyrics and sameness in tone permeates throughout the song. Although “Dedicated” has a message of praising all those involved in the hip hop game, at times, Proseed seems off in his lyrics in conjunction with the beat as the track ends up sounding messy and unfinished.

“Take My Hand” is a poor attempt at a love song from Proseed as it doesn’t get more cliche than this. As he rhymes about how “we can explore the world” and “we hot as an oven,” I am wondering what other overused phrases I will hear before the track is over. Unfortunately, this track and many others in “Quintessential” lack a defined hook and instead, almost lazily uses the repetition of the title to the track as a hook.

Despite the negative turn “Quintessential” takes on many occasions, Proseed redeems himself on some stand out tracks. The first single to be released back in December 2006, “Party in a Place” goes beyond rhyming about partying, but also highlights the struggle as an emcee. The remix from Germany’s Ulliversal is also featured in “Quintessential” as a piano and more jazzy beat are incorporated to change up the sound altogether.

In the poignant track “What Did You Gain?,” Proseed reflects on the emotional learning experience resulting from death of a loved one. With ethereal sounds to commence the track, Proseed remembers his grandmother as he says:

“…she couldn’t walk, couldn’t speak, couldn’t see her son
We’d point him out in front of everyone that’s standing there
Dragging foot after foot saying, ‘Gram your grandson is here’
…It’s sort of like I’m asking you, ‘What is this?’
I ain’t violent, I ain’t passive, I ain’t asking for forgiveness”

Also, with its more southern sound incorporating an acoustic guitar, “Little Missy” tells a story about a girl who lives amongst a troubled family as she yearns to break free. Proseed shows off his talents as an emcee in this track as he descriptively unveils the journey of this character through his rhymes as he says:

“Now I can think of no better thing
Than giving little missy some wings…
See, she scribbles her dreams of colors of life
She lives with a feign
Her mother’s not right
She holds a coloring book tight across her chest
She only started, but that’s all she’s got left…”

As a writer, emcee, and producer, Proseed has a multitude of talent that is definitely present. His potential to reach a more structured, mature album is in reach with the right lyrics and production. It is obvious that his passion for music and production does exist and with the right moves, it is just a matter of time that he can achieve the quintessential status he is truly aiming for.