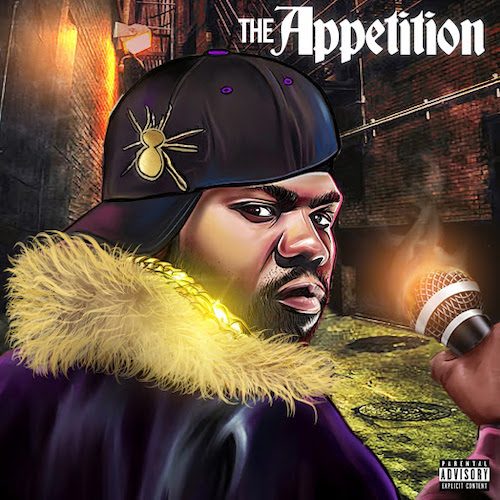 There’s no better place to start this review other than what Grant Jones had to say about “The Wild“, Raekwon’s last release: “The Wu needs Rae but also … Rae needs the Wu too.” And so we come to “The Appetition“, a short EP from the four decade rap veteran who is now 50 years old (born date January 12th), so congratulations to The Chef on his longevity. He could easily have rested on his laurels let alone the royalties from his solo albums and Wu-Tang Clan contributions but he’s still here doing the damn thing.

As informative as I’d like to be I can’t tell you who the soulful singer on the opening track and featured single “Solid Gold” is. Apparently this is a common issue because “Raekwon Solid Gold singer” auto-completed in the search bar before I could finish typing it. The energy of his performance brings the track up a hell of a lot because this is not the “Cuban Linx” era Raekwon on the mic. It’s not that the writtens are bad. In fact lyrically ‘Kwon may be easier to follow now than he was at his prime because he’s already created so much slanguage that there’s nothing new to invent.

“Regardless of my info, it’s meant for
The solids and the kinfolk
Sit down, check what your kin wrote, bro
Knowledge is college, blessings is lessons
Don’t be no dumb-dumb-dummy
cause that don’t make you (solid gold)”

All the elements are present. The silky smooth production with a hypnotic reverberating bass, the crooning R&B artist, the Wu-Tang Clan rap legend. Rae sounds tired though. That may be slightly unfair since we already noted his age, but I don’t think that’s the reason. It seems like Raekwon’s throat is weary from so many years on the mic. Listen to “Shame on a Nigga” and then listen to “Chef It Up” — he’s not “smoother than a Lexus” any more. He was always a little raspy but now he’s undeniable gravelly. It feels like the weight of having to carry even a short EP on his own is holding him down. He intones the rhymes in a slow, gritty, methodical way. It’s still Raekwon but it’s a Raekwon without all the tornado tag team match partners that could jump in any time he jumped out.

“Flex around town with the powerful, floating in the latest
I’m like a Jag, more spots, more courageous
I’m here, I never left, the Chef blade henchmen
Rep with a thousand-one trench men”

It’s paradoxical to say that it’s enjoyable and uninspired at the same time, but when Chef spits lines like “Army brigades with blades” it sounds like he’s revisiting his greatest hits lyrically instead of flexing his intellect. Perhaps that’s how it should be at this point in his career. “Shells Kitchen” fits that theme best. “Old niggaz be lurking to snatch you when you’re working”. Chef tells a gritty cinematic tale with visuals. “We like Arabian Knights and this is Dubai, the camels is the new fire” and “rappers I will eat you like crab sticks, you catfish” show that even as a weary veteran he still paints portraits with the bars he spits.

Ultimately Rae’s longevity is actually his worst enemy. He set a standard so high in his youth that even if he was fully motivated and totally innovative it would be almost impossible to create that magic again. “The Appetition” is Raekwon making music because that’s what he’s expected to do, and the amazing part is that even a halfhearted effort that’s almost phoned in still has some of the luster that made him shine so brightly. In time this version of Raekwon could actually reinvent what it’s like to be an elder statesman of the rap game, but the EP offers a few unintentional reminders that he is one just by making him do all the work himself. A few cameos from Method Man (who has aged remarkably well) and RZA or other Wu members makes Rae shine brighter. Working with younger hungrier producers and emcees would help too — he’d get his own appetite back to be at his very best.