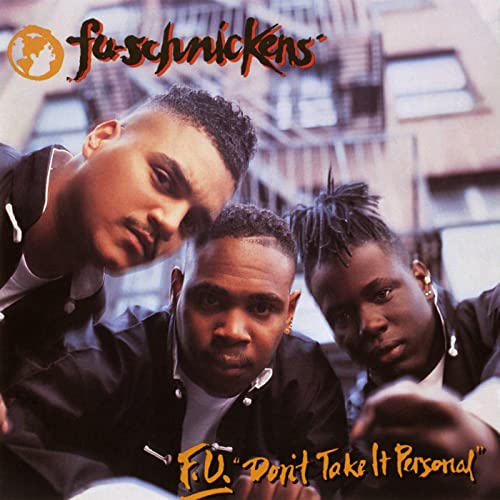 It was a running joke in my college days that the Fu-Schnickens had a “Greatest Hits” album. With only two studio albums to their credit, less than a handful of singles to their credit, and their hottest songs being duets with Phife Dawg and Shaquille O’Neal, the idea of them having enough material for such a release was laughable at best. It was the poster child for record label hubris to suggest the Fu-Schnickens had “Greatest Hits” with such a short and inconsequential career. These days the reason for such an album to exist seems far more obvious — the group and their record label couldn’t see eye to eye, so they put out the album just to fulfill their contractual obligations and immediately ceased doing business with them afterward.

At the time of their debut album “F.U. Don’t Take It Personal” the Fu-Schnickens were certainly not a joke. The album reached gold (certified 500,000 physical units sold) at a time when that was still a major accomplishment. Those aforementioned collaborations were not the forgettable hits of a minor rap act — they were indicative of Jive Records being willing to pull out all the guns and shoot for the top. In fact “What’s Up Doc? (Can We Rock?)” was the song that introduced the world to the idea of Shaquille O’Neal rapping. While he was clearly fourth out of four in terms of skill and delivery, the novelty of the hulking NBA giant being such a huge rap fan he couldn’t wait to give it a try made it a charming effort. It’s strange in hindsight that the song is NOT on “F.U. Don’t Take It Personal” since it’s far more of a Fu-Schnickens song than a Shaq track.

“Forget Tony Danza, I’m the boss” is also charmingly dated as punchlines go. Getting back to what IS on their debut album though, “True Fuschnick” has always been my favorite track. The buzzing sounds in the opening immediately evoke a “Wu-Tang killa beez on the swarm” feeling, and Chip Fu’s hyper speed lyrical babble immediately mesmerize the listener. The pounding bass and drums and overall freshness are credited to A Tribe Called Quest on production, though that could mean anyone from Q-Tip to Phife Dawg to Ali Shaheed Muhammad (maybe even Jarobi) was the one responsible.

Tribe also got the credit for “La Schmoove” featuring Phife Dawg and the heavily gospel/spiritual song “Heavenly Father.” Christian rappers get a rep for being preachy and pushy, but the sentiments here are surprisingly genuine. “You blessed me with wisdom, the knowledge to rock right.” They each spit verses about being sincerely thankful for the blessing of being alive and able to pursue their dreams of success in the rap world. Thanks to that Tribe production and an uncredited female singer on the hook, the whole track holds together nicely.

If you know any other song from the debut of the Fu it’s the Jamaican stylings of “Ring the Alarm,” where Chip Fu plays it up with the declaration he’s “a lyrical prophet from the West Indies.” It’s a good introduction which probably explains why it was their first single, but it unintentionally makes the point that Chip Fu could have succeeded as a soloist since neither Poc nor Moc Fu are heard anywhere on this cut.

From this point on the rest of “F.U. Don’t Take It Personal” is deep cuts that none but owners of the album have ever heard. From the remainder I’ve always favored “Check It Out” featuring Dres from Black Sheep, though it’s a posse cut where a slew of emcees all get a chance to grip the mic tight. “Props” is an interesting self-produced song but it’s also a little self-indulgent at over five minutes long. The Grand Puba hook from Brand Nubian’s “Dedication” is nice though. If “Back Off” immediately reminds you of Cypress Hill’s “How I Could Just Kill a Man” it’s not a coincidence — they both sample “Tramp” by Lowell Fulson.

The samples on “Bebo” are even more obvious though — Parliament’s “Flashlight” and “Impeach the President” by The Honey Drippers bleed through ever bar. “F.U. Don’t Take It Personal” doesn’t give you any indication that the career of Fu-Schnickens as a group would be so short lived, but you do get the “Chip Fu is the real star here” feeling that Leaders of the New School fans would have gotten about Busta Rhymes. For rap albums from 1992 though this one is as solid as it comes in terms of production, mastering, length and quality. It’s 43 minutes that doesn’t overstay its welcome.