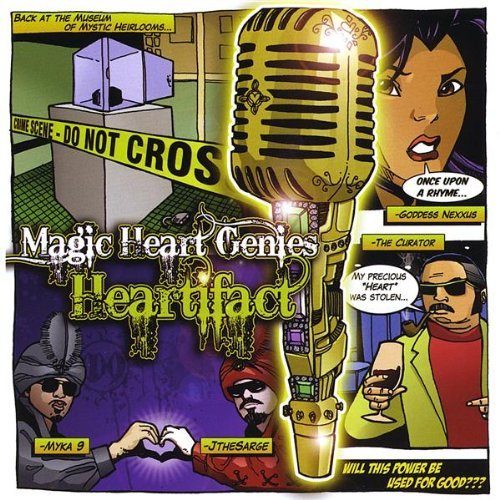 You know hip hop is a great culture when Kool Kim can reinvent himself as NYOIL or Cee-Lo can become an international star after fifteen years on the grind. Freestyle Fellowship founder and local legend Myka 9 is staying relevant via a new concept crew, the Magic Heart Genies. Together with fellow Cali MC JtheSarge, he’s constructed “Heartifact,” an album that experiments both musically and lyrically, to mixed results.

The first track bombards the listener with as many instruments and sounds one could expect from a magic genies; meanwhile, Myka 9 raps, “Persian princess, put her in a whirlwind // Sanskrit chanting, dancing in a turban.” Like a less patient Gift of Gab, Myka raps as if he’s racing Twista, whereas JtheSarge is a bit slower and considerably less convincing. Indeed, “All in a Dream” serves as a fair blueprint for the album: rapid-fire verses amidst beats both strange and ambitious.

Backed by an infectious trumpet line directed by JtheSarge, “Hold Me Back” is an example of the Genies’ formula (or lack there of) working beautifully. Myka slows his flow down a bit and gives a word of advice:

“Don’t let it stress you out
When you got all these responsibilities you’re concerned about
Don’t let it work your nerves
When you can’t earn what you need they won’t pay you what you deserve
Don’t let em’ push you round
When you are stronger, indeed hold you peace and then stand your ground
Don’t wish your life away
When you can live through the pain to a better and brighter day
Or night, have faith, or fight
You turn the other cheek and they might hit you with a blade or pipe”

“Heartifact” reaches moments as strange as the Indian-inspired “Royal Caravan” and the break-heavy “Save My Soul,” but its perhaps the most conventional song on the album that resonates best. Stripping down the production considerably, “Talk To You” works as a groovy, genre blending piece of work. Lucas Hieronymous’ impressive percussion is aided by jubilant pipes (I didn’t say it was that conventional), while Myka 9 delivers a catchy, sing along hook.

At the end of the day, “Heartifact” is ultimately too bizarre to fully embrace, and yet too daring to disregard.