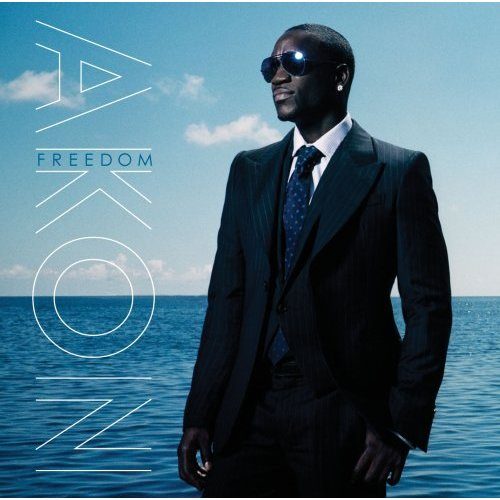 Akon has had some life. Going from rapper, to talented song-writer, to Lauryn Hill’s boyfriend, to jail, to releasing smash hit records, to a gazillion guest appearances… It is a wonder that he still has the passion to knock out hits, both for himself and for others. Of course, in today’s landscape, who knows how much artists actually produce â€“ since they frequently credit others alongside their own name, but Akon certainly has the musical ear, even if someone else helps twiddle the musical knobs. His last album, “Konvicted,” was a solid enough outing with a few mega-hit singles (like the Eminem-featuring “Smack That”), and Akon has already dampened expectations for his third solo offering, claiming that it won’t be as “street” as his previous two, since his own life has moved on from his alleged crime-ly existence. He turns out to be true to his word, focussing more on love-orientated dance tracks, steering almost completely away from the hip hop/R&B style from which he made his name.

That lack of variation â€“ believe me, the album sticks to a couple of themes, and refuses to budge â€“ makes for a slightly flat listen, although, as with his previous two albums, repeat listens help “Freedom” to improve slightly. Electronica is certainly the prevailing genre (particularly in the first half of the album), as it permeates almost every musical note, not to mention Auto-Tuned vocals. Of course, the whole Konvict Music camp essentially revolves around finding melodies that will lodge themselves in your head, by hook or by crook, and tracks like “Right Now (Na Na Na)” and “Against the Grain” get the job done. To his credit, â€˜Kon doesn’t retread his previous albums, even if half the songs on here are reminiscent of other hits he has had his hand in this year (for example, “Trouble Maker” sounds suspiciously like Kardinal’s “Dangerous”). As for the themes â€“ money and girls. That was easy enough. Well, apart from his recalling the immigrants’ journey with Wyclef on “Sunny Day.”

There are a few disappointments straight off â€“ there is no Michael Jackson collabo here. Rightly or wrongly, that still would have been a massive draw, but something clearly went awry. Obviously, since it is 2008, Lil Wayne has a contract with God (or the Devil) that he has to appear on every major album â€“ listen hard for his guest appearance on “Chinese Democracy” (probably) â€“ and, naturally, he disappoints, as he has done on virtually every guest appearance since “Tha Carter III” finally made him above caring (I’ll cook the breakfast – egg on face, anyone?).

Someone emailed me a couple of weeks ago, asking why I reviewed T-Pain’s album. Well, these lads here used to claim to be making Hard&B â€“ rap-influenced R&B. Ironically, whilst T-Pain increasingly embraces rap, Akon has more or less moved away completely, and it is only a partial success. Don’t get me wrong, it is probably a good thing that he doesn’t complain about be “Locked Up” when he was stealing cars (allegedly), but on “Konvicted” he found a winning balance of hip hop and R&B. On “Freedom” the scales are out of sync, and it is no coincidence that the second half of the album is much more successful than the first half â€“ he gets within touching distance of doing what he does best. On the first half, he sounds like a bad singer in the 1980’s making boring dance tracks that would’ve been intended for the “Miami Vice” soundtrack. Fine, there are the normal catchy hooks, but there aren’t many songs on here that come close to matching “Don’t Matter” or “Mama Africa,” even “Smack That.” For a large number of Akon fans (myself included), “Freedom” will be a disappointment, and a predictable one at that.