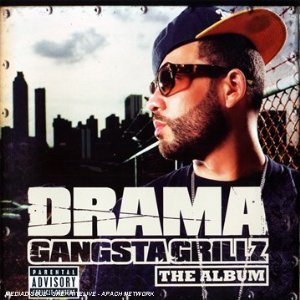 Mixtape king. DJ for T.I. Charged with (and arrested for) racketeering. DJ Drama is all of these things and a whole lot more, but may be best known for a series of released (some commercial, some bootleg) titled “Gangsta Grillz.” Even if you bought one every other week for a whole year there’s a good chance you’d still be behind, because Drama is nothing if not prolific – which unfortunately helped lead to the racketeering charges in the first place. Even though the opening skit of “Gangsta Grillz – The Album” makes fun of his arrest, the subject is not joke for him or fellow DJ Don Cannon. In 2007 making and selling mixtapes is a crime, even if the same record labels shutting the producers down gave them the songs to bootleg in the first place, so that their artists would be more popular or well known.

Rather than being down in the dumps about possible indictments and jail time Drama has taken his hustle to the next level on his Atlantic Records debut, linking up with many of the same artists he’s now accused of stealing profits from. If you’re a long time reader of this website that shouldn’t come as a surprise at all because rappers understand what the corporate heads don’t – mixtape sales increase legal album sales for artists too rugged for commercial radio airplay or 106 & Park appearances. It shouldn’t come as any surprise then that the majority of rappers on “Gangsta Grillz – The Album” come from the Dirty South. Most of these songs are all-star collaborations, such as the heavy Dame Grease laced “Takin Pictures” featuring Rick Ross, Jim Jones, T.I., Young Buck and Young Jeezy. The closest one gets to a single act track is “Da Art of Storytellin Part 4,” where the singing of Marsha Ambrosius from Floetry enhances the strong verses from OutKast. Almost everything else does it big including the lead single “5000 Ones” with seven people in the mix – Diddy, Nelly, T.I., Twista, Willie the Kid, Young Jeezy, Yung Joc in alphanetical order. Even though I don’t endorse the practice of making it rain I can’t but admit the Jazze Pha beat and the braggadocious hook about “stacks so thick rubber bands can’t hold ’em” is catchy as all hell as is Twista’s rap:

Twista: “It’s the Twista and can’t nobody hold him
The money stacks that we makin you can’t fold ’em Get love in the strip club
Got a nigga feelin so freaky they be askin ‘Is you roamin’
Yeah makin it rain is automatic
when they say that they trickin you got it
Yeah pimpin is a habit from the city of Mr. Mr. Magic
and no motherfucker bet not bitch about it
Steady stackin paper that’s the reason we be throwin it up
[…]
I’ma pop a couple of bottles and I’ma start that good shit up
Got 5000 ones and I’m about to throooow it up
Sip on some that Patron
I’ma about to put a hundred up in one of the thongs
Gotta stroke a lil’ somethin cause I paid the bill
Still money ain’t shit, I make major deals
Better ring the alarm hear come the paper
Twista comin in the club when I get off of the lot
If she come up wit a fatty, I gladly tip her
Jazze, tell ’em what I got”

“Gangsta Grillz – The Album” gets hella dirty on song after song. “187” isn’t an update of the Dr. Dre and Snoop Dogg classic; rather it’s an all original Drumma Boy produced track with B.G., Eightball & MJG and Project Pat. On “Beneath the Diamonds” Mr. Porter brings things in silky pimp smooth for Devin the Dude, LA the Darkman and Twista to blow to, but the Hi-Tek produced “Talk Bout Me” is surprisingly the hardest pounding track of the album and unites Lloyd Banks, Young Buck and Tony Yayo for a G-Unit posse song sans 50 Cent. Mr. Lee ensures that everyone from the Swishahouse family is “Gettin’ Money” as Paul Wall, Killa Kyleon, Lil Keke & Slim Thug ball out to smooth guitars and hi-hats. Khao’s “No More” may be as soft as this album gets as Lloyd croons with Willie the Kid and T.I., but even this track has just enough thump to keep things as gangsta as the grill on Lil Jon. Should it come as any surprise that said same rapper does the introductory title track of this album? Of course not!

Making a compilation album stand out is always a tough task, but DJ Drama is a veteran of the mixtape game so he already knows how to select only the beats and rappers who will provide choice cuts to make his album sell. “Gangsta Grillz – The Album” lives up to his reputation, and in the process sounds like a best of HIS best of. It’s hard to hate on that!