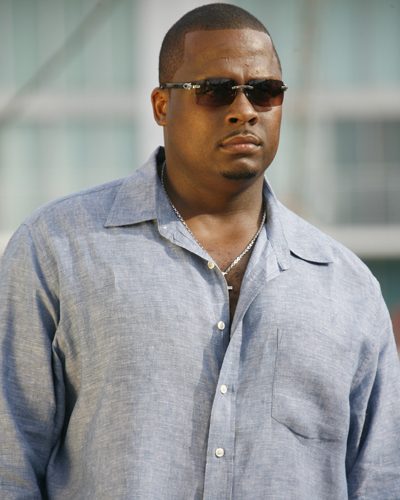 Slip N Slide Records, the label that brought us Trick Daddy, Trina, Rick Ross and Plies, celebrated its 15th anniversary this year and this week RapReviews caught up with the company’s founder, Ted Lucas, to get a little historical perspective on the label and discuss some of the highs and lows he’s been through, including the Rick Ross situation. In addition to the history lesson, Lucas also revealed what qualities attract him to an artist, why he feels Trick Daddy was a trailblazer for southern Hip-Hop, and the reason he gives props to, of all people, the Jonas Brothers and Miley Cyrus.

Adam Bernard: Slip N Slide is celebrating its 15 anniversary. When you started the company in 1993 did you envision what it would look like in 2008, and if so how does the reality of Slip N Slide in 2008 measure up to that vision from 1993?
Ted Lucas: Naw, man, I’ma tell you, this was a good old ghetto boy trying to get in the music business back in 1993. I was trying my best just to make it and it wasn’t really something I always dreamed would happen. My dream was to be in the NFL and I just got with Trick Daddy’s brother Hollywood and said, man, let’s try to start a record company. Your brother can rap. Let’s invest some money in your brother. Honestly I have to give a lot of credit to Trick Daddy because he was the one who believed in being a rapper. He knew that he had the skills and by him knowing he had the skills he pushed me and by me being the businessman that I am I learned more and more about the business and here we are, 15 years later, still going.

AB: How different do you think your story would be if you were trying to launch the label today?
TL: Wow, man. First of all, with the way the music business is right now, with people not selling the albums that they once were selling, and budgets not being the same, people ain’t selling millions of records no more. When I first game in you had people selling two, three, four million, ten million. If somebody sells ten million right now he’s the king of everything. The times have changed a lot. Just to sell a million records now is like selling ten million back then. It’s just a lot harder. I tell someone that’s trying to get in the music business now, time-wise, if you don’t have the experience and the relationships you invest a lot of money to learn a real lesson in this time and age in the music business.

AB: So it’s all about networking first.
TL: Yes. You definitely have to network and learn a lot about the business because the business now is changing daily. It’s not the same as a couple of years ago when you were putting out new artists and new artists were going gold. A new artist is lucky to sell 50,000 copies now, so the times have definitely changed tremendously and to try to go and invest in a new artist, a new up and coming company that no one ever heard of, man, I tell ya, that’s scary.

AB: I gotta ask, why did you name your company after a children’s water toy?
TL: {laughs} Like I told you, in 1993 I wasn’t even thinking about a record company, we were just doing something, let’s incorporate a company. I’ma tell you what it means now; they slipped and allowed us to get into the game and now we’re sliding to the top. That’s why we’re here fifteen years later.

AB: You have seen your fair share of successes and controversies over the years. Let’s start with the successes. Hit me with some of your moments as CEO.
TL: To see an artist who didn’t have a dollar in his pocket have millions of dollars in his bank account and take care of his family. That’s the best feeling in the world for me. That right there is the one. You see a kid that comes out the ghetto, don’t even have a place to stay, and a couple years later he has millions of dollars in his bank account and he’s able to provide for his family. He or she.

AB: Do you provide a way for artists to learn how to deal with their money, because a lot of artists get their millions and six months later they’re filing for bankruptcy.
TL: That’s the hard part. My company being an independent company, I look at my artists as business partners. I try my best to have a relationship with them where we’re close and we can communicate and I can sit down with them and tell them the truth. I don’t want to be your yes man, I don’t want to be your boy, your road dawg, I want to be your big brother and I can keep it real with you and you can keep it real with me. It’s more than just about selling records, we have a relationship. For example, Trina’s been on the label from day one and we’re still in business together when there are no other female rappers out there. This year we released an album with Trina independently and she sold 200,000 copies and sold over a million ringtones and to do that in this day and age, for a female that’s going on her fifth album now, that’s a relationship. It ain’t no other female rappers that really exist that put out albums in 2008. Check the charts. She outsold a lot of males that came out and I don’t see no other female rapper that came out that did what Trina did. That is more than just an artist on my label. I’m here for her and she knows that.

AB: On the flipside, what are some of the moments that you really could have lived without?
TL: Oh yeah, {groans} there’s a lot of those. The lawsuits. Everybody forgets this is called the record business and you gotta understand taking care of the business side of it. That’s really important. A lot of people just want to be in the record part, they don’t worry about the business. That was a learning experience. Now I take my time, cross my t’s, and make sure everything is together before I move. Before I’d probably put out a record without having a contract done and all that stuff. That was the time of learning the lesson and making sure everything was done properly and in place. You don’t release an album without a contract being done. And with success, like Biggie said, mo money, mo problems, but it’s a learning experience and I learned a lot from it and it taught me not to make he same make the same mistakes.

AB: Is it fair for fans to expect rappers to live their lyrics?
TL: Yeah, because you’re believing in what they’re saying. When you’re buying someone’s album you’re buying into them, so I do understand that part of it, what a fan is buying it for and believing their lyrics.

AB: As both the CEO of a label and a fan of Hip-Hop, what qualities attract you to an artist?
TL: To me, the artist that can still make people go to the store. You’re buying into their lifestyle. You’re buying into believing in them as an artist, not a song. They gotta have what can still make a consumer jump in their car, ride to the store, and buy an album, when you can go on your computer and download the song instead of go through all that. I want the artwork, I want the picture, I want the t-shirt. I believe in this artist, I like that artist. I’ve seen Rick Ross make guys all around the country grow beards. I’ve seen girls all around the country say if Trina was able to do it, a girl out the ghetto, to make it and be successful, I can do it, too. I’ve seen Plies get every girl in the country wantin to be a bussy baby. Those are the types of artists I try to be in business with. Trick Daddy made the whole world say you don’t know nann. Those are the kind of artists I try to be in business with, someone who is going to still make people want to go out and buy an album because they believe in that artist that much.

AB: I remember when I was growing up Miami was known strictly for their bass sound.
TL: That’s it. And Slip N Slide 15 years ago, that was the hurdle we were overcoming and Trick Daddy was able to go and do thug rappin. He was able to be the thug that he is. He didn’t have to do the booty shakin and the Luther Campbell type music, and I believed in him as an artist because I could understand and relate to what he was saying. He overcame all those hurdles to open the doors for guys nowadays to be able to say what they’re saying on these records and have people buyin it.

AB: Finally, what do you have in store for us next?
TL: Aw man, I’m so excited for 2009. We’re starting our R&B division and our rock division and we’re going to continue to spread our wings. I’m starting to offer distribution deals. This is another Cash Money idea, this is another No Limit idea, this is another Slip N Slide idea. I want to be able to be the one to open up those doors and give these guys an opportunity, so I’m offering distribution deals to different guys that I see that have their stuff together, have a great company. I’m looking for a chief and he got us Indians and everybody ready to go to war and make good music. I want to help him come up and do what he gotta do. I’ma just spread my wings and not be in tunnel vision and one style of music and I’ma just continue to make great music and surround myself with good people. We’re also doing this thing called The Next Big Superstar where I’m actually going on the road myself, the CEO, and coming to your city trying to find the next big talent in that particular city. Everybody can’t come to my office. Every demo might not be the best. It’s better to see people live. I can see they might not have the particular song right now, but they have a swagger about them, they have a style about them, it’s how they deliver their words. It makes me say if I can just get this guy with this producer I have I know the chemistry will be there.