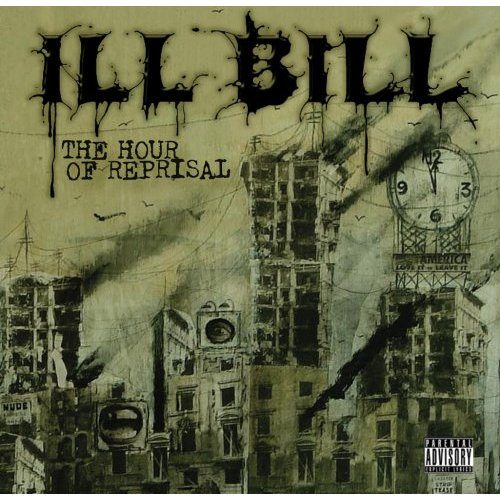 Ill Bill :: The Hour of Reprisal

Who is Ill Bill? By now the question should be a rhetorical one, but despite his hustle Ill Bill is still far from a household name. The underground hero has been putting in work for years, getting critical acclaim for his old group Non-Phixion and creating super-hype for his new group La Coka Nostra. Despite being a beast on the mic and behind the boards, Ill Bill is still trying to put his name out there. It’s odd considering his brother Necro has a fraction of the skill that Ill Bill does but probably has more fans. I could attribute Necro’s fame to his shock rap lyrics, but if getting fans were that easy Ill Bill would have taken the cake with his controversial “White Ni**er.” The answer to the riddle lies in the man himself. Who is Ill Bill? Ill Bill is whoever he wants to be and that is what prevents him from giving in to the demands of mass consumption. Ill Bill speaks his mind. So unlike Necro, he doesn’t cater to shock rap fans looking for controversy. Instead of a formulaic album, “Hour of Reprisal” is a surreal trip into Ill Bill’s mind. Ill Bill is a conspiracy theorist. Ill Bill is a Slayer fan. Ill Bill’s uncle struggles with addiction problems. Ill Bill is a goon. Ill Bill is many things and he manages to convey them all in one hour on this album.

Ill Bill took this album dead serious. The intro says it all as he basically chose to try to depict his life and identity in one short hour. “Babylon” kicks things off and lets you know just how bleak Ill Bill’s outlook on life is:

“This operation doesn’t exist
The revolution will be classified live broadcast from the abyss
Out cities are crackpots and cardboard condominiums
Visions of track marks cross minds lost in delirium
The towers dropped, blind fools, confusion, who knew?
Now the world watch Saddam’s execution on YouTube
Propaganda machines wage media jihad
A teen walks into a crowded movie theatre with bombs
Reading the Koran, silently obedient to God”

This is definitely some depressing music, but who can blame Ill Bill given the life he’s experienced. Despite hitting on many current events, “Hour of Reprisal” is still a very personal album. On “White Ni**er” he addresses the volatile situation he faced as a white kid growing up in the projects:

“My uncle shoots heroin, bathroom floor found a syringe
When I was on the Hiero tour, Howie went out on a binge
This snake bitch I was fucking even took him to cop
A month later he was on the floor looking for rock â€“
I missed a flight to the Czech Republic
Walked in the path of Howie living in his own puke, dying from crack
Cocaine poisoning â€“ he shot heroin since fourteen â€“
February, 2003 he wants clean
I helped him out, he kicked crack, dope and meth
Hosted shows, free clothes, bubble baths, autographs, t-shirts
Soon I’ma make a Howie action figure
before his latest relapse I’m glad I captured pictures
I love Howie, homie used to change my diapers
To save him I’da jumped in front of spray from snipers
But this is just something that he’s gotta do on his own
I’ll try to get through to him with this song yo”

On “Too Young” Ill Bill is joined by Hero and Slaine of La Coka Nostra to deliver a word of warning to the youth:

“I was, too young to fall in love like Motley Crue
Too young, I pulled a gun and I shot this dude
It was over a girl, foolish pride, I was crucified
Just another youth for juvenile, doin’ time
Forgive me mama, I never meant for you to cry
Went to trial, I was sent to juvy two to five
Handcuffed, a back of a bus, forty of us
Life as a shorty shouldn’t be so rough
And I ain’t no punk, here you fix a face or get your face fixed
Facelift credit keep colored you get you face ripped
The’y’ll bust your shit right open and make you leak
You better chill out, before I birthday-cake your feet
Not a bad guy, I don’t wanna catch mantime
So I chill with work-release in the back of my mind
But the guy that I popped wasn’t dead, he’s locked up in here now too
And wants revenge, I got shanked in my bed!”

The man is quite skilled at making interesting and entertaining music, even when it is highly personal. Take “U.B.S. (Unauthorized Biography of Slayer),” a track that has appeal despite the fact I am not a fan of Slayer nor could I really care less about their career. Despite that, I still don’t skip the track since it has thumping beat and I’m fascinated by both Ill Bill’s dedication to the band and the way he put together his words.

After one listen, you easily get a feel for who Ill Bill is. Even through his conspiracy heavy rants on “Doomsday Was Written In An Alien Bible” and “Society Is Brainwashed” Ill Bill’s paranoid personality finds a way to shine through. The personal tracks completely seal the deal as far as showcasing Ill Bill’s skill. Were it not for a few lack luster beats (“The Most Dangerous Weapon Alive” and “I’m A Goon” come to mind) this would be close to a perfect ten. As it stands, “Hour of Reprisal” is still an extremely solid album and definitely one of 2008’s best releases.