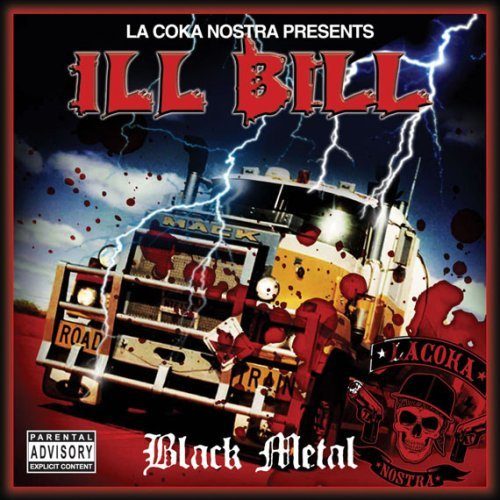 The first in what looks to be a series of compilations to introduce members of supergroup La Coka Nostra, “Black Metal” previews LCN-related tracks that feature Ill Bill. Bill’s quite a veteran in the music biz, cutting his first tracks as a teenager with his younger brother (today known as Necro) heading a short-lived death metal outfit called Injustice before eventually envisioning a rap career (a period documented on the ’03 release “The Early Years: Rare Demos ’91-’94”). It took him years to finally get it in gear as a member of New York underground hopefuls Non Phixion, an exposure that enabled him to pursue his solo plans, which materialized in ’04’s “What’s Wrong With Bill?” album and various mixtapes, including two volumes of “Ill Bill Is the Future.”

With Non Phixion discontinued, Bill is now part of La Coka Nostra, which includes the original line-up of House of Pain and rappers Slaine and Big Left. The four LCN tracks featured on “Black Metal” are not notably different from the rest of the material. Boston rapper Slaine has a polished delivery with a “Marshall Mathers LP”-era emotionality to it. Everlast still reps Irish heritage and Islamic influence, his raspy voice deployed in hooks that claim, “La Coka Nostra, the fuckin’ world ain’t ready.” “Get Outta My Way” relies on anthemic stabs in a Ruff Ryders kind of way but adds a rock layer to it while Everlast is the latest in line to complain about the state of the art: “I swear hip-hop got me lookin’ at the front door / I used to love H.E.R., now I wanna smother / when I see all the bastard styles that she’s mothered.” “Where Hope Goes to Die” sounds like something The Alchemist or Havoc would have come up with in the later ’90s as piano sprinkles meet sporadic, synthetic, bass-like chords in a sparsely structured beat. “Broken Pieces” is a thoughtful look at lost individuals by the trio of Ill Bill, Slaine and Jeru the Damaja. “Soldiers of Fortune” sees the crew laying it down over a hard, mid-tempo beat with Slaine combining a sober perspective with high hopes as he declares, “This is business, we the new Cohens and Simmons’s.”

As for the Cult Leader himself, “the Illest of Williams since Billy Dee” doesn’t dodge the spotlight despite guest appearances galore. The rapper who once claimed, “I’m a Slayer album personified,” now samples Slayer (“Raining Blood”) for “Awaiting the Hour,” where he is assisted by Killah Priest. To for once witness Priest over music that differs considerably from his typical choice of beats and to hear his “dark gothic teachings” paired with Bill’s “inner pain translated and written in blood” makes “Awaiting the Hour” a clear highlight of the CD. The same goes for “Come One, Come All” featuring Styles P (and an uncredited guest), who remains calm in the eye of the guitar storm while Bill loses it like the rock ‘n roll dude that he too is. The title track promises “goon music engineered to make you bang your motherfuckin’ head to it,” but as a straight up hip-hop joint it is a) not fast enough for such a purpose and b) atypically reluctantly programmed.

The dense “Apocalypse Now” features the same line-up (Bill joined by Uncle Howie labelmate Q-Unique and LA veteran Sick Jacken of Psycho Realm), and manages to actually rock despite (or thanks to) an unexpected Indian influence. Meanwhile hip-hop heads will duly take notice of further BK collaborations “The 3 Wise Men” (with OC and Jeru recalling the second installment of the Crooklyn Dodgers) and “I’m From Brooklyn” (with Brooklyn Academy). “Ten Wheel Drive” calls out competition and contains lyrics that remind the listener of Ill Bill’s dedication to his art:

“It’s outrageous to the world at large
how I had four aces at the table when I turned back cards
Leave your faces in amazement cause I work that smart
Never been a lucky person, yo, I earned that spot
My position is that of a ruler of a kingdom
to raise the underground 100,000 feet above the fools
who think it’s not over for music without soul or substance
laughin’ while they took all your money and showed you nothin'”

Finally there’s the touching “Darkness Deepens,” which brings Bill back together with Sabac Red to recreate the permanent pandemonium that was the world of Non Phixion. But regardless of who he’s partnering with, Ill Bill stays true to himself, rocking long, layered, r-rated verses delivered with a sense of urgency while still having the patience to “sit back, recline” with his “cocaine rhymes, heroin beats.” Consisting of anything but impromptu cuts pieced together to fill up a mixtape, “Black Metal,” while containing little actual heavy metal, is a solid resumÃ© that musically touches on all the expected points between epic, eerie and etheral. It naturally lacks the cohesiveness that is expected from the forthcoming “The Hour of Reprisal,” which was slated to drop on September 11th but was re-scheduled for an early ’08 release.