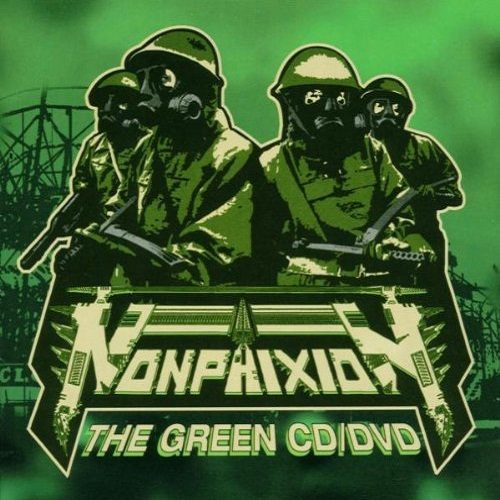 It’s been two years since Non Phixion unleashed “The Future Is Now” on an unsuspecting public. To say the album was an instant classic might not be doing it justice. Despite having been part of the New York hip-hop scene since the mid-1990’s, the album still managed to sound years ahead of their fellow East coast peers. Featuring a wide range of audio excellence from the likes of DJ Premier, Large Professor and Necro along with their chief partner DJ Exclupse, the triumverate of Sabac Red, Ill Bill and Goretex created a lyrical vision over the music that was post-apocalyptic and simutaneously uplifting. The album’s impact was to change the landscape of underground rap, daring other artists that followed to equal or surpass their skills. In the words of this writer, “Non Phixion is about as close to the Beastie Boys as Eminem is to Vanilla Ice.” They personified excellence barr none, no matter your race color or creed.

In the two years since the underground rap scene has continued to evolve, and indeed many rappers stepped up to the challenge and created their own hip-hop classics. It would be expected for Non Phixion to use “The Green CD/DVD” as their response, to push the envelope further while simultaneously pleasing their fanbase with more of their solid rhymes and conspiracy theory tales. Never count on Non Phixion to do the expected though. Instead, “The Green CD/DVD” ties together new rap tracks with previously unreleased freestyles from New York radio stations like 89.9 and 97.1 FM. It starts out hot, with an intro culled entirely from cult film “The Warriors,” followed by the Goretex produced song “Existence”:

“I like to visit other countries and see other songs
The universe is ALL OURS to explore, that’s what my mother thinks
My brother thinks most cats are shady, I think he may be right
But FUCK THE DARKNESS, I’ma try to focus on the light
I be the True and Living Ruler of MY WORLD
I want world peace, so if you got beef, stay the fuck away from me chief
The green leaf we spark like soldiers stompin through a swamp
Without high boots or radiation suits that’s glowin in the dark”

Pounding bass and rapid-fire spit rhymes are all over this song, and they are Non Phixion’s trademarks. This is followed by a short “Farragut Road” freestyle and then the full-length symphonic song “We All Bleed” produced by 10K. This is a mixtape model for the album, with many long songs alternating with shorter promos or live freestyles – the “Eclipse Promo” being an exception in that it could qualify as a full song in it’s own right. There are occasional spots where two complete tracks come back to back, like “Info Junkies” and the Kanye West-like “Caught Between Worlds” produced by Domingo.

It’s an interesting way to build an album, and for the most part it works as the briefer interludes keep you hyped for the longer songs that follow. This effect is accentuated by the fact that tracks blend together seamlessly, like the short song “Area 51” melding into the longer “89.9 Freestyle 2” that follows without you even noticing. Even with this presentation format individual songs still stand out. “Make it Happen” blesses the listener with an old school hip-hop beat and a chorus sung by the all-too-absent-from-rap vocalist DV Alias Khrist. The Necro produced “Criminal” is surprisingly subtle and smooth despite the ominous title. Goretex takes things to a mellow note on “The Fully Monty” but can’t prevent the harder edge of Context produced “Skum” that follows from ratcheting up the adrenaline a few notches. 10K excels musically on the Non Phixion cautionary tale “Food,” right before the album closes out with “Don’t Get Beside Yourself” featuring Hostyle and the Necro produced “Refuse to Lose” with the requisite Chuck D sample.

With a quality of material that exceeds the average gun-toting banality of most New York mixtapes, “The Green CD” is a great hour long blend of materials that mostly holds up to their previous album’s standards, although it may slightly dissapoint some for not breaking new ground. Any dissapointment quickly turns to joy though when one recalls that this is actually called “The Green CD/DVD,” since the bonus disc included inside is a look at the life and times of the group. Among the many features included are tour footage, interviews with Non Phixion members and rarely seen music videos such as their “Rock Stars” joint. It’s become pretty standard for CD’s to come with a DVD bonus disc these days as an incentive to cop the album instead of bootlegging it over the net, but few “incentives” can surpass the quality or length of this extra shit. As the reviewer I apologize for not having the time to cover “The Green DVD” in depth with a seperate feature, but I hope you’ll take my word for it that it’s worth the price of admission alone. And in case you didn’t know, Uncle Howie is real, and you’ll find out he’s quite a character. “The Green CD/DVD” will do well to tide over the Non Phixion fans until “Nuclear Truth” comes out Fall 2004.