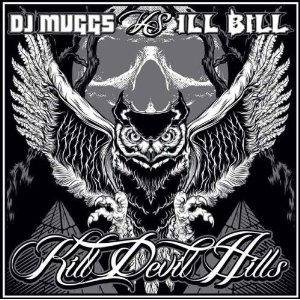 Your favorite underground rapper’s favorite underground rapper is probably Ill Bill. As William Braunstein nears the age of 40, some may say he missed his opportunity to become a superstar in hip-hop let alone a household name in the mainstream. Bill himself is undoubtedly fine with that. His career raps put the “rugged” in “ruggedly uncompromising,” and his obsession with government conspiracy theories and the Illuminati aren’t exactly marketable at the top of the Billboard charts. Something clearly gnaws at Bill though – album titles like “What’s Wrong With Bill?” reflect his doubts and concerns. His woes are the curse of the indie rap star – a major figure in a minor market trying to survive off touring and album sales even while the stores like Fat Beats which once moved units for him are all going out of business.

What’s an Ill Bill to do in this world? Too smart for the dumb raps flooding radio airwaves these days, but too stubborn to decide he’s middle aged and just hang up his mic in retirement. Surprisingly he’s actually found a few solutions. The first involved joining up with fellow artists like Everlast and Slaine to form a rap supergroup called La Coka Nostra. Besides promoting his solo albums, L.C.N. has put out its own compilation of music, bringing Ill Bill’s name to a much larger audience than had heard of him before. The next chapter in Braunstein’s plan for success has already been written – collaborate with DJ Muggs. This plan has born fruit before for the likes of GZA and Sick Jacken among others, so now it’s time for Bill to reach up and grab a branch of that tree.

“Kill Devil Hills” is the result of that collaboration. To say that Ill Bill records have been poorly produced in the past would be a gross error – in fact both his solo songs and his group efforts with Non Phixion have been recognized as underground rap classics. There’s another level you reach when you work with someone like DJ Muggs though, a man best known for his chart-topping work with Cypress Hill who nonetheless remains steadfastly devoted to the rappers who have never sold enough units to tour with the Hill. As a result of his reputation “Kill Devil Hills” almost spirals out of control, as over a dozen different rappers all jump on this album to drop bars with Bill over the blazing Muggs beats. It’s to the credit of both Bill and Mr. Muggerud that things don’t go crazy and that Ill Bill is not overshadowed on what’s ostensibly his album. The closest “Kill Devil Hills” gets to that point is when Raekwon comes in first over the Shaft style funk that opens up the stellar “Chase Manhattan.”

Rae: “It’s a stick-up, nobody move, get on the floor
Get on the wall, take your sneakers off, take off your drawers
Cover your dick, bitches be quiet, don’t say shit
You move, I’ma make sure I clap you in your clit
All my gunnies are squeezin
Listen to me, before you die, just leave me my cheese
I ain’t playin, I’m sprayin, off top, doors is locked
Fuck around try to run, you greasy”

Bill: “This bitch started blowin me in the safe
Her fantasy to fuck a bank robber, so I blew a load in her face
I knew her from Canarsie, used to work at Chase Manhattan
Smiled when I walked in wavin the ratchet
An inside job, the best kind, the rest I rob
Stay on the ground or you’ll be laid to rest by God
I’m seein big face hundreds and bearer bonds
I also see cameras on, I’m glad I wore my ski mask camouflage”

Cypress Hill frontman B-Real also has a star turn over the angelic backdrop of “Amputated Saint” (which ironically features M.O.P. yelling profusely) but before the nasal one can steal the shine Bill gaffles it right back with his quick wit:

“Before the C.I.A. cuff and take us away
Light up some O.G. kush and take us out in a blaze
I ate some brownies last week and I’ve been high for days
Should’ve known when B-Real was the guy with the tray
Cheech & Chong spliff, twit up an entire eighth
It won’t freeze your nose, the shit’ll set fire to your face”

Fellow Coka Nostra members take their turn on “Skull & Guns” but by far the largest lineup of any song on the album is “Trouble Shooters” featuring O.C., Sean Price and Sick Jacken. Any of these songs are destined for multiple mixtapes thanks to the Muggs production and cameo appearances, but when Bill and Muggs crank it up to epic levels on “Illuminati 666” there’s no doubt who the star of the show is:

“Yo, we got a black President, the aliens’ll be here soon
Open up your eyes and your ears, here’s the truth
Beyond blind faith, we don’t really know what to believe
The meaning behind these old books could be anything
Who the fuck translated these words from Aramaic
to the language spoken in the empire of the hated?
We the children of a lesser God, make me wanna pull an Escobar
And I ain’t fuckin talkin about Nas”

Only two things stand in the way of this album being greater than it already is – too many short tracks (all but two being 3:30 or less) and the fact that Bill’s continuing obsession with conspiracies may put off some first time listeners. With DJ Muggs behind the boards and a well-regarded cast of guests showing their support for the project though “Kill Devil Hills” stands a very good chance of being Bill’s most mainstream and commercially successful album to date.