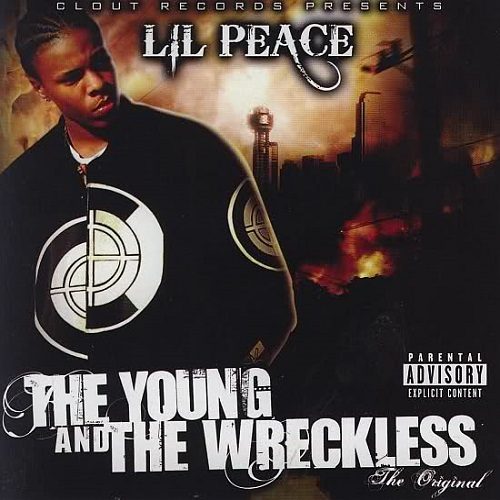 Lil Peace :: The Young and the Wreckless

Lil Peace was the latest Dallas rapper to try to ride the wave of dance music currently pumping out of the south. I say “was” because as of this review “The Young and the Wreckless” has already hit the bottom of the barrel online. One cent copies peddled on Amazon is not a good look for any rapper. One could call it karma and be done with it, but it’s not that simple. No one can really blame Lil Peace or Clout Records for what they did. See, young rappers making dance music are really popular down here. Extremely popular. So popular that we’ve been listening to “Do The Stanky Legg” and “Halle Berrrry!” for well over a year down here and instead of being played out those songs just got national distribution. It’s not a new phenomenon either. Lil’ Will was talking about his dougie for close to a year before the rest of the nation picked up on the sound. People like to be told what to do around here, so it was logical that Lil Peace thought he could get in on the action. He followed the formula well too. The problem is he followed it too well, leading to an obscenely generic album with little redeeming value.

The best to place to start on albums like this is where the publicity leads you. In this case, Lil Peace touts his hit single “Hit the Dance Floor.” The formula here is a big pounding beat, slinky, non-distinct synths, and an instructional hook. Everyone needs to hit the dance floor. On a better day I might make a flattering comparison to the earliest MCs in New York City who did little more than plead for people to get on the dance floor, but close to 30 years later you need to do a little more than make the southern version of an old school song to get props. Sadly, the entire album is little more than similar attempts to create or catch a trend. “Texas Swag” throws a little southern rock riffs in the mix and finds Lil Peace trying to appeal to the country thugs out there and drops some of the worst lyrics I’ve heard:

“I’m a straight up Texas boy, What you know about us?
Or what you heard cause I know these lames be talking bout us
How we so country, you damn right I’m a country boy
You like them southern, then come to the southside with your boy”

At times I can forgive the obnoxious rhyme the same word twice but with a different meaning trick mixtape rappers like to use, but this is just laziness at its peak. Not only does Lil Peace rhyme the same word twice, but both times it’s a one-syllable word. Lil Peace’s lame attempts to make you bounce in the club know no bounds. Imagine the man threatening you all the while sounding like he’s instructing you to dance. That is the odd combination we get on “Who Scared” where he threatens you over a club track. Now the south is known for rowdy club anthems, including “Never Scared” and “Tear Da Club Up,” but those tracks were unintentional hits. Lil Peace on the other hand is trying so hard he misses that caveat.

At this point I’m done trying to find any redeeming qualities on this album. Lil Peace can rap in the most literal sense of the word. He can speak and keep a beat while doing so. His lyrics suck. His topics suck. Everything about the music is generic and unmemorable. Usually, even on the wackest CDs I can find a few tracks to bump, but this CD lacks even that. The hooks are grating exercises in repetition. Do you want to make a song about having big rims? Just repeat that in the hook:

Worried about maybe rhyming something with the word rim? Don’t. Repetition is the key here. Honestly, I wouldn’t be so hard on Lil Peace if I knew this was the best he could do, but the weak attempts at a hit are so obvious his wackness can’t be ignored. His flow isn’t bad. The production certainly isn’t amateur. If they tried this could have been something better. Instead we’re left with a CD so generic it gets outshined by people pleading you to “do tha stanky legg” and yelling out “halllleee berry!” at the top of their lungs.