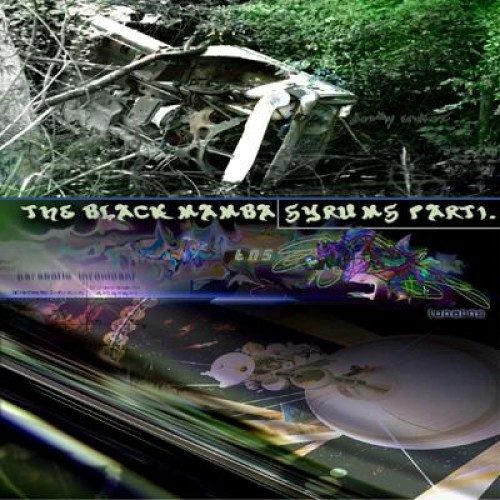 If Bigg Jus is not a great rapper, he is an excellent producer, and the latter, artistically, is more important to his sum and style. In a way, then, he reminds one of MF Grimm, minus the banal lyrics – there’s much that’s good beyond the performances. No, Jus is not bad, but his strengths are ‘wholes’ – that is, full art, including atmosphere, ideas, as well – to a lesser extent – the technical parts of rapping. As noted elsewhere, Jus is typically not a ‘pleasant’ listen, but that’s a neutral artistic judgment; quality-wise, his work has it, which should be stated objectively. That said, on to specifics.

Jus’s first solo album, an EP called “Plantation Rhymes,” preceded this. Some of those songs appear here, and will not be touched upon. But, a few sound re-recorded, are a bit ‘cleaner,’ and even redone, all for the better. In brief, there is little stylistic difference between the two albums; they’re both dark, witty, ‘noisy,’ and discolored, although “Serums” is a bit more listenable. For example, “It Luvs Me” starts with a melodic nursery rhyme, which is slightly distorted in Jus’s threatening way, and moves into a few dirty drums that are far more subdued than the material on his EP. His vocals, too, are slowed-down, his enunciation cleaner. Cacophony moves in near the end, but the result is good: Jus doesn’t fall into the monotony that sometimes undermines him.

“Dedication 2 Pray” is combined with a new track, “Tenets of the Elements,” one of the worst things here – Jus is doing barely more than talking over a disorganized mess of sounds. But, a few brief cuts, silences, and samples come in… in fact, they are underexploited, and thus do little to break the monotony. Of course, monotony, on its own, is useless; but, in combination with other sounds (or silence!), the dull can become quite interesting. But, not so much here. “Athena” is similarly dull, but for a different reason. Here, although many elements work, none are prominent or done well enough to stand out. As before, Jus mumbles throughout.

“No Dessert Till You Finish Your Vegetables” features truly excellent production, with muffled bass, violins, guitar chords, and sirens mostly in succession – in brief, an unorthodox, but good arrangement, interrupted by scratches and silences. It’s the textbook case of great ‘noise’ – that is, purposeful clutter, with real direction. The album finishes with a few instrumental versions of his previous EP’s highlights, a good addition since the material is so strong.

As before, the highlights are the same as on “Plantation Rhymes,” which means some of the material here is slightly superfluous, being remixes, reconstitutions, and so on, of his other work. Regardless, even this has a couple of highlights, and there’s no reason to pick up the EP over this.