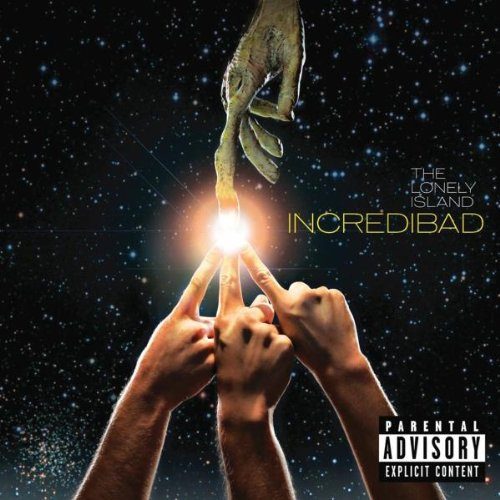 This appears to be your typical dance/club rap song with lyrics that cover all the bases of the genre. Drinking alcohol – check. Macking on a hottie – check. Rubbing on each other on the dancefloor – check. Taking her home to get your grind on – check. If you’re familiar with The Lonely Island though, there’s NOTHING typical about this song. If you’re not, let’s rewind four bars and hit play again.

The Lonely Island first achieved widespread recognition for their “digital shorts” on Saturday Night Live. The talented trio of Akiva Schaffer, Jorma Taccone and Andy Samberg are 30-somethings that hail from California and clearly came of age listening to N.W.A and Public Enemy. They all went their seperate ways after high school, but fate brought them back together in 2001 and comedy ensued. Yes “Incredibad” is 19 tracks (and one bonus DVD) of R&B, dance and hip-hop music comedy. Serious heads might question the value of hearing three affluent white boys from Saturday Night Live doing rap music, assuming it to be at best parody and at worst mockery. You would definitely be right about the parody part, but assuming it’s done with malice would be all wrong. Great comedians say they spoof or joke about things they love the most because it’s funnier when it comes from the heart, and it’s no different for this trio. The songs on “Incredibad” put totally absurd scenarios into totally normal hip-hop styles which T.L.I. are well familiar with, and if you’re a lifelong rap fan the jokes will be FUNNIER. Take “Natalie’s Rap,” a WAY over the top sendup of Eazy-E’s “No More Questions” with actress Natalie Portman playing Eric Wright’s role – QUEEN AMIDALA FROM STAR WARS DOING GANGSTA RAP. This is even funnier than it sounds.

“All the kids lookin up to me can suck my dick
It’s Portman motherfucker, drink ’til I’m sick
Slit your throat and pour nitrous down the hole
Watch you laugh and cry; while I laugh, you die
And all the dudes, you know I’m talkin to you
(We love you Natalie!) I wanna fuck you too!
(Hey!) It’s for Portman! (Hey!) It’s for pussy!
I’ll kill your fuckin dog for fun, so don’t push me!”

The first time I heard “Natalie’s Rap” my jaw hit the floor, right before I pulled it back up to laugh so hard tears rolled down my cheeks. “Incredibad” does this same thing to you time and time again. Tired of hearing rappers talk about drinking Dom Perignon and Asti Spumante? The Lonely Island have the solution, a side-splitting anthem to drunken debauchery called “Santana DVX.” Appropriately enough it’s famed hip-hop wino J-Zone who provides the beat to their rhymes.

“I feel alive for the first time
Each sip hits my lips like a landmine
Without Carlos in my life I was livin a lie
He makes his guitar weep, but his champagne cries
He’s a Southwest, tie wearin bolo champ
Comin straight out the box with a bolo champ’
Yo he a beast with the sugar and yeast, mix it in pots
Like the way his release mixed jazz blues and pops
And the salsa fusion, he’s lady’s shoe producin
Plus he teamed with Rob Thomas for a music revolution
On the 7th day, it was said God rest
But on the 8th day he made the DVX”

Never one to settle for HALF of a good joke, Lonely Island take it to the next level by bringing in EQUALLY renowned hip-hop wino E-40 to play the role of Carlos Santana on the last verse.

“I’m like no other, one of a kind, my sparkling wine
Santana DVX make you wanna have sex (OOOOH)
I’m rich bitch! I’m havin my chips
Get laid all the time, by 70’s chicks – uhh
Won hella Grammies, batches throw me they panties
I’m probably your daddy, I probably nutted in your mammy
I’m a Bay boy, city life, been around the corner
Try to play me foul and my vatos gon’ run up on ya
A legend, a boss, that’s what I are
Ask about me pimp, ‘tana be killin the guitar
Old enough to know better but young enough to not care
I get active – might slap a bitch with my hair”

“Incredibad” is not flooded with cameo appearances, but the guests that do appear come in at exactly the right time for the right reason. T-Pain’s singing is the perfect compliment to “I’m On a Boat,” yet another loving hip-hop send up which takes bragging about how you spend your money to a whole new level. “Dreamgirl” featuring Norah Jones is a deceptive track if you’re listening while distracted. It starts out with Jones crooning about the perfect woman, then takes a left turn once the erstwhile rappers start DESCRIBING what that dream girl is actually like.

“Dreamgirl you amaze me all dressed in paisley
Love how not one but both eyes are lazy
When I first saw you you were drivin the bus
Thick skin, strong nose like a rhinoceros
Dreamgirl so beautiful, lips all crummy
Skin like asphault, nose so runny
Thick thighs, no waist, not a care in the world
You not crazy girl, you just my baby girl”

Nothing is sacred to Lonely Island and nothing should be. Slim Thug’s “Like a Boss” is rewritten into a whole new form of balling and shotcalling most would not want to try. Angry white pothead rap gets spoofed on “Lazy Sunday” where instead of getting smoked out the group locs out and screams about their mission to watch a PG flick with no permission (I won’t say which movie – it spoils the joke). I never thought the words “boiled goose” could be the perfect punchline for a rap song, but after listening to “Boombox” several times I’ve changed my mind. It’s actually a “cautionary tale” about the power of big bass beats in the funniest way possible. The best parody of the whole album may be “Ras Trent.” The song is given a totally authentic reggae sound thanks to production from Sly & Robbie, but the lyrics portray the biggest dreadlocked college poseur you’ve ever seen!

“Rudebwoy livin in the shanty dorms
My roommate Nick is an ignorant baldhead!
Now chant down Babylon, midterm essays
Then puff from de chalice I fi make from a Sprite can
Last week I read a book about Selassie I
Then told my bumba claat parents I was switching religions
Excuse I! Oh hot stepper
You do so many dutty crimes (Nyabinghi!)
And plus you’re fully skylarking all the time
Udda look ya now
Have you ever noticed, how baldheads suck?
Bada-ding-ding-ding-ding-dong-ding-ding-dong DUCK
Excuse I for my skanking, give thanks and praise
Me toil part time at jah Cold Stone Creamery”

Reviewing this album with a critical eye it’s possible to see that some listeners won’t get the joke or will see “Incredibad” as mockery of hip-hop instead of the loving comical tribute it truly is. The more versed you are in rap though, the easier it is to get the joke. You can hear Smooth B from Nice & Smooth in the laconic delivery that opens “Punch You in the Jeans,” and you can hear the AutoTune stylings of Kanye West or T-Pain in “Space Olympics.” The Lonely Island are daring you to smile, peppering their album with “We Like Sportz” songs that mock male machismo while using skits like “Who Said We’re Wack” to goof on pretentious rappers who think even one bad review is a mortal wound.

All of these jokes might fall flat if The Lonely Island didn’t include everybody from the worlds of rap and R&B in on the joke. You can’t help but know they all get it when Justin Timberlake shows up to croon on the self-produced anthem “Dick in a Box.” Yes ladies and gentlemen, DICK IN A BOX. What more can I say? There are very few people who can joke about rap and still make a good rap song in the process – only Devo Spice and Weird Al Yankovic come to mind – but you can add The Lonely Island to the list. Since the album comes with a bonus DVD of their best Saturday Night Live “digital shorts” and musical skits, you really can’t go wrong with “Incredibad.” The album is well timed to take advantage of the popularity they’ve gotten from “Jizz in My Pants” but one can only hope these white boys from Cali won’t stop here. There’s 30 years worth of hip-hop to let the air out of, so bring on the jokes. Maybe next time we’ll get a gangster rap song from Morgan Freeman.