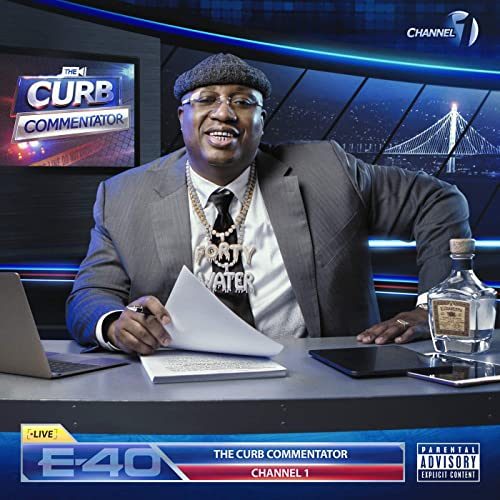 That’s been true of Earl Stevens since the late 1980’s. The very name E-40 says it all – E likes to drink 40’s – or at least he did in his youth. These days he’s a little more sophisticated in his drinking. In fact the lead single of “The Curb Commentator Channel 1” seen above (produced by Droop-E) promotes Kuiper Belt Bourbon, a brand 40 claims is “aged for eight years to perfection” to “please even the most sophisticated bourbon connoisseur.” Maybe I’ll give that a try someday, even though I don’t consider myself “sophisticated” in any way. My knowledge starts and ends with this sentence: “All bourbon is whiskey, but not all whiskey is bourbon.” I also know you don’t pour it over ice because you’re just watering it down and ruining the flavor. That’s it.

It’s not surprising that 40’s taste has evolved over the years. Like his new bourbon, Stevens has aged and matured over the years, and the Vallejo rap legend is now in his early 50’s. The fact he’s still producing music that SLAPS as an elder statesman of hip-hop in general and the Yay Area in particular should not be understated. On “19 Dolla Lapdance” he’s still bragging and flamboasting like his younger self, with the added benefit of the life experience and business acumen of his older self. “You niggaz are suckaz, if you was starvin I wouldn’t give yo’ ass a crumb/You like a overcooked steak bitch, you’re well past done (BIOTCH)/I got some news you can use/Some of you dudes playin football with basketball rules.” Fellow Cali rapper Suga Free joins him to prove that while rap may be a young man’s hustle, the old pimps can still get their stroll on with the best of them.

I have an unqualified fondness for E-40 given that I’ve been listening to him as both a soloist and member of The Click since before I was old enough to legally drink (not that it stopped me). True to those roots he puts family first as his Click cousin B-Legit appears on the slow riding “Smellin Like a Brick.” I’m smiling not just because it’s always good to hear them together, but because E-40 has always advocated reinvesting your hustle money and GOING legit. “One day, I might buy me a Five Guys/A Whataburger, or a Kentucky Fried/Chicken, I’m havin my chicken now that I mention/Right now I’ma need y’all undivided attention/I get what I want, you get what you can afford/When I’m in a virtual meeting, I sit on the board.”

As much as Earl’s unique slang, vocal tone and accent have set him apart from the rest of the rap scene, it’s that self-empowerment that really takes things to the next level. E-40 might buy himself an expensive car and show out, but he can afford to because he’s built a business that continues to generate major revenue. He didn’t get a million dollars from Jive Records back in the day and spend it all — he took that million, flipped it into ten, divided it and reinvested it in himself. That’s why younger (32) rappers like Wiz Khalifa still pay their respects to him on tracks like “Up and Down.” Even as they share the spotlight it’s 40 that still shines: “Some of these niggaz think they poppin with they lil’ ol’ local game/Alexa KEEP me in rotation, bitch I’m in my own lane.”

There’s only one thing wrong with “The Curb Commentator Channel 1” — it’s short. No not Too $hort (though the two are good friends), HELLA short. By the time “Bet” featuring K Camp is over, the entire EP is done in 15 minutes. I enjoy listening to the salty 40 sprinkle game on rappers until they are well seasoned, and I’ma need about 30 more minutes of him doing the same with or without the guest stars he features here. What we’ve got here is essentially an appetizer, and its made me hungry for more, but knowing Earl Stevens the hustle never stops and the main course isn’t far away.