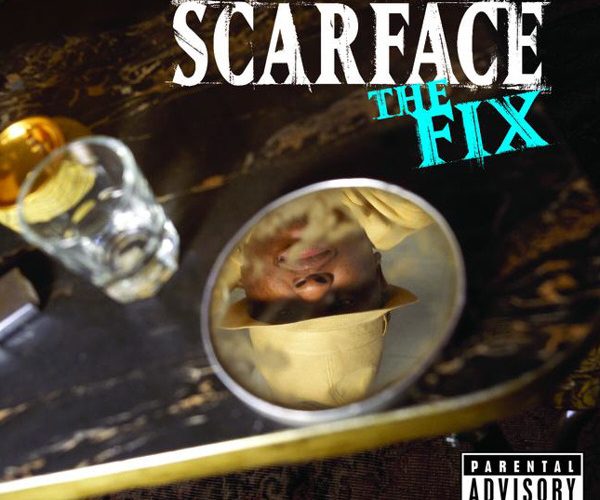 Several years ago Scarface spooked a lot of hip-hop fans by naming his first album in the 21st century “Last of a Dying Breed.” Rumors starting buzzing: was the legendary Mr. Brad, hip-hop’s own DJ Akshen, putting down the mic and going into retirement? Those who wanted to think the worst probably got a DOUBLE DOSE from ‘Face being named the head of Def Jam South. It seemed like Scarface was making power moves; using his bankable name and business acumen to become a behind-the-scenes music mogul.

Fear not, Scarface is about as likely to retire from rapping as Too $hort. With his seventh solo album “The Fix,” ‘Face is out to prove he’s still as addictive as he’s ever been. It’s also possible he’s mocking the DEA and the FBI, who are both notorious for hassling the MC over the years. Take the wrap off this slim CD, and you’ll find the liner notes inside in a little plastic baggie. Long-time collaborator Mike Dean starts things off on the short title track with a dark Curtis Mayfield-esque piano instrumental, but it’s not until “Safe” that Scarface gets down to business on the microphone:

“So listen up my niggaz, and I ain’t tryin to preach
I’m just tellin it from my side cause I’m in the streets
I done been there, done that, seen a whole neighborhood
destroyed by the government bein tipped off by one rat
He caught a dope case and they threatened him with time
He get his own fuckin people jammed and he take the five
That’s the shit there; they ain’t even catch him with dope
But they gave him thirty-five years cause the nigga done spoke
Snitchin, that’s a motherfucker, watch what you say
You don’t know no-motherfuckin-body, nigga you lame
Watch your so-called homeboys, keep to yourself
Stay away from niggaz gettin caught that get out of jail
Don’t talk about your business, keep yo’ thoughts in yo’ head
And this game it got a paper trail, watch where ya spend
Don’t write down names and numbers, it’s a memory thang
Never shit where ya sleep, keep the crib out of range
And plus you never let these niggaz know where you stay
Cause when the push turns to a shove, they hit and you say..
.. true motherfuckin game..”

A lot of MC’s have claimed to be gangsters over the years, or to spit the true nature of the streets, but Mr. Brad’s upbringing in the 5th Ward of Houston, Texas speaks a volume ofREAL LIFE EXPERIENCE many of rap’s other wannabeez never had. His raps combine intelligence, street smarts, and a natural flair for storytelling that put him solidly in the upper echelon of reality rappers in hip-hop. He’s a gruff, boisterous braggart with a deep voice – if you don’t know his trademark tone, try to imagine Big Daddy Kane as a thug with a Southern accent. His vivid raps and memorable voice made him a star in the Geto Boys long before he first went solo, and in the decade since that star has not faded. If anything, it is just now reaching new heights of success; the evidence is that “Guess Who’s Back” features him collaborating with one of rap’s two or three biggest names today: H-to-the-Izzo.

“Came from the dirt; I emerged from it all
without a stain on my shirt, you can blame my old earth For the shit she instilled in me, still with me, pain plus work
Shit she made me milk this game for all it’s worth
That’s right, these niggaz can’t fuck with me
I’m callin guts everytime, drag my nuts everytime
Homey, we make a great combination don’t we?
Me and the Face Mob, everytime we face-off
Face it y’all, y’all niggaz playin basic ball
I’m on the block like I’m eight feet tall”

Not surprisingly, this underground mixtape smash hit was produced by Kanye West. It rolls along with a layered mixture of bass, piano chords, and musical breakdowns and breakaways that are so subtle you can miss them completely while listening to Sigel, Hova and Scarface do their thing. You can’t miss the Roberta Flack and Donny Hathaway sample featured in “On My Block” though. If it sounds familiar you’re probably an M.O.P. fan, because they first laced this beat on “World Famous.” Lucky for both artists that they have cajones as large as Akshen’s own lone-star state, because neither treads on the other’s toes using this same sample. In fact, without taking anything away from the Firing Squad, Scarface clearly makes it his own for three and a half minutes this song lasts:

“On my block – it ain’t no different than the next block
Ya get drunk and pass out, and they back ya to the house
And when you wake up on the couch you goin right back at it
On my block when you DAT fucked up they LAUGH at it
On my block, it’s just another day in the heart
of the Southside of Houston Texas, makin ya mark
On my block, we’re cueing all the time, playin dominoes
Keep the Swisher sweet down until my mama goes
back inside — then we can fly
Pass it around a few times to get high”

Every once in a while Scarface tries to crossover to a different audience, changing up his style to sound a little more like a preacher than an MC. The most memorable example is probably “I Seen a Man Die,” but ‘Face is at it again on this album with “What Can I Do?” featuring Kelly Price. It’s a decent collaboration though, and it’s hard to be mad at it.

“I’ll say goodbye to you cruel world, I see peace in the red sky
See the beast when the dead die, the leaf in my head high
If the streets up ahead cry when the heat from the lead fly
Fuck the grief when I said bye, folded sheets on my bed dry
The turn of a tale, the tale of the tape
The destruction of human flesh, of the not-so-great
Long list of the John Doe’s that caught nigga’s spirit
As to jails for souls lost, when holstered God hears it
The resurrection of heavy hearts, crowdin the room
Muffled sounds on the outside, echo the tomb; but I’m cold..”

This is not the album’s last duet though. Nas pops up on the Dean and ‘Face co-produced “In Between Us,” Faith Evans shows up on the snappy Neptunes jam “Someday,” and W.C. rocks the spot on “I Ain’t the One.” These guests all make excellent contributions to the songs they’re on, but they also play the role and don’t try to outshine or steal the spotlight from one of rap’s most enigmatic personalities. Some rappers rely on the cameos to carry weak albums, but ‘Face is so strong on these cuts he proves he really doesn’t need them. By the end of this much too short 48-minute long album, you’ll already want another hit of the Southen rap impresario. Fortunately unlike the china white, “The Fix” is not gone after your first hit. Pony up ten to fifteen for this dope, and you can get as many doses of the real as you like. Best believe, it’s a good investment.