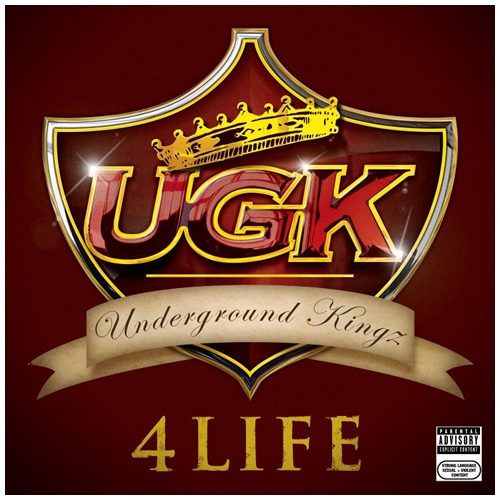 This one requires more than a little bit of explanation before we get underway. In August of 2007 the iconic Souther rap duo UGK released an epic double album simply titled “Underground Kingz.” The album harkened back to the earliest days of their career and their group name back when they hit nationally in 1992 – in other words a 15 year career had brought them full circle. It was a spectular way to celebrate their importance not only to the Southern rap genre but to hip-hop as a whole, and furthermore to celebrate the release of Pimp C from prison at the very end of ’05. Here’s the important and somewhat ironic thing to keep in mind: in the year and a half it took for “Underground Kingz” to hit stores they recorded at least enough songs for a double album. In music industry terms that means they recorded MORE than a double album’s worth of songs, then cut down to just enough to fill two discs, resulting in the almost flawless double CD they finally released.

Under normal circumstances that extra material might have been left on the cutting room floor, slowly leaked out as B-sides to singles, or used here and there as a throwaway song for a movie soundtrack. Pimp C’s tragic death on December 4th, 2007 changed all of that. The late Chad Butler had less than half a year on God’s green earth to enjoy the fruits of his double album success before his spirit left this world behind. What was Bernard Freeman a.k.a. Bun B to do now? Well for starters he resurrected his solo career started while Pimp had been in prison and did so quite admirably with the release of “II Trill.” Still Pimp C’s death left a hole in the hearts of UGK’s friends and fans for there not to be one final go around for the dynamic duo from Port Arthur, Texas. Suddenly it all came together – use the best of the extra material created during the recording of “Underground Kingz” plus the best of whatever else they had worked on since the double album was released and put together one final UGK album for the masses. Final does in this case meanFINAL. Out of respect for his comrade, Bun B has stated this won’t be an experimental posthumous style Biggie album where everybody remixes verses from non-UGK songs to create a quasi-legit album. These are UGK songs, recorded by the original artists, only lacking in being mastered and released before his untimely death. “UGK 4 Life” puts the finishing touches on these songs and gives us one last chance to appreciate their dual legacy before resigning Pimp C’s recording career and the group’s fate to history.

Often in these reviews I break down lyrics from individual tracks to analyze the performance of the rappers in terms of their vocal delivery, rhyme writing ability, humor and wit, and creative poetic techniques. This is one of those rare cases where I’m not going to do that save for one track – the lead single “Da Game Been Good to Me.” It’s appropriate that this song is produced by Pimp C, making the song as fitting as the album in signing off on their history. What UGK has always been known for, what they will be remembered for on this song, and what they will be remembered for with this album and their entire catalogue is the perfect chemistry between the members. Bun has always had a very laid back, deep, penetrating Southern drawl heavy with bass and laced with surprisingly fresh punchlines – and occasionally crass misogyny. Pimp is the yin to Bun’s yang, living up to his name with straight up pussy game and a higher pitched voice, but often underestimated as a storyteller and gritty urban narrator. The lead single embodies all of those qualities in both men.

Pimp C: “UHH, first album went platinum, now you can’t go gold
Made ya deal with the devil, but you sold yo’ soul
You rent a lotta cars, rent a mansion and them hoes
You say you sold your Phantom, bitch they took yo’ Rolls
Get disrespected everywhere you go
Big bodyguards when you come for the shows
They already know you got shit on your name
Nigga, you a pussy, they gon’ take yo’ chain
Take yo’ piece, rings and watch
You play rich, boy you need to stop
I ain’t dissin nobody, no particular name
Ya shoe fit nigga, get the fuck up out the game – lil’ BITCH!”

Bun B: “I’m a Down South MC, I’m cold on the mic
I say it how I feel and I do it how I like
I write what I see, what I do, and what I know
And keep it one hundred off top from the do’
Now whether at a show, in the booth, or on the street
No matter where I go and no matter who I meet
Everybody tryna tell me how they feel ’bout the South
On the cool, them haters need to shut they fuckin mouth
Cause we grip grain, nigga we pop trunk
We to’ straps and we ready for the funk
Some niggaz two-step, some niggaz dance
Some niggaz just ball wit’ a bottle in they hands
Sell a couple ringtones niggaz, that’s bread
You hatin on paper get that FUCK up out yo’ head
Worryin ’bout my cheese, getcha own stack
It’s goin down in the South, you don’t like it click clack, motherfucker!”

There it is – gritty hard truth from one of the hardest and most truthful group’s in rap history. “UGK 4 Life” is a stellar 16 track tribute to the boys from the South doin’ it one mo’ gen, but even amongst the final cuts there are a few gems that shine just a little brighter. “Still on the Grind” pounds with a Steve Below beat as both rappers experiment with a staccato syllable flow that only they could pull off, with singing from Raheem Devaughn to smooth things out. Cory Mo’s sounds on “Everybody Wanna Ball” is the classic organ synth cruising in your candy whip music that can be heard throughout UGK’s entire career, and this song would fit on any album they’ve released. Isley Brothers “Here We Go Again” makes up a sugary sweet duet called “The Pimp & The Bun,” and with Ronald Isley crooning it only gets that much sweeter. Southern collaborations like “Swishas & Erb” with Sleepy Brown and “Purse Come First” with Big Gipp are the kind of loyal to the South tracks UGK were known for, but that doesn’t make the heavy Pimp C beats of “Used to Be” featuring E-40 and B-Legit any less fresh for them being from the West, plus 8 Ball & MJG get all up in the mix too. From the “Intro” to the “Outro” there’s very little to not like about “UGK 4 Life” other than the fact it can never be done again, and any music videos released off this album won’t feature Pimp doin’ his thang. It can’t be helped, but you can help pay your respects to one of the South’s greatest rappers not to mention one of their greatest rap groups by adding “UGK 4 Life” to your collection.