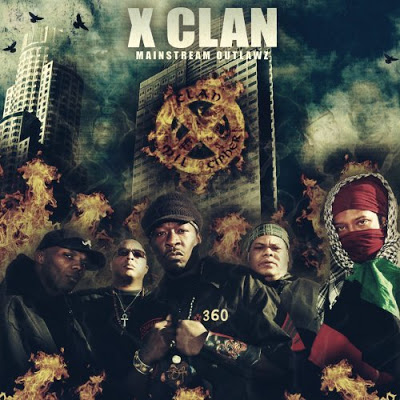 The ongoing feud between underground hip hop versus mainstream has been a sensitive subject with many in the rap industry and has yet to be resolved. Hip hop artists and listeners are constantly divided when determining if music is more “commercial” sounding or when hip hop can be called “intellectual” instead. Although the fine line between the two never seems to be settled, X-Clan re-emerges after two years since their reunion back in 2007, in an attempt to relay the message that there is no line of demarcation between underground and mainstream. Their latest album, “Mainstream Outlawz,” aims to put aside any boundaries between the different sounds of hip hop as “it belongs to everyone.”

As many may recall, X-Clan has been through their fare share of struggles and restructuring for over a decade. Since their inception in the early 90s, X-Clan has constantly been seen as a more controversial group dealing with afrocentrism and has also dealt with the deaths of Professor X and Sugar Shaft. With these hurdles in mind, X-Clan released their successful comeback album, “Return to Mecca,” after more than a decade in 2007 and now they focus on the state of hip hop in their post-reunion album, “Mainstream Outlawz.”

Brother J stands as the driving force of X-Clan. Dedicating a year to the “Mainstream Outlawz” project and spending time in Houston in an attempt to gain inspiration, he utilized that time in order to get in touch with the spirit of hip hop while regaining what seemed to be lost. In addition to his “soul searching,” Brother J has brought on some long standing hip hop talents to join the cause. Bun B and vocalist Tony Henry join X-Clan in “Thru My Eyez” which takes the listener on a journey through the streets of Houston while showing how the ghetto can shape an individual. Although the track maintains a concise message, its simple beat of organs is too reminiscent of a church sermon and proves to preach more than teach.

“Keys to Your City” features the infamous femcee Medusa as they show how real hip hop is able to span from coast to coast. With a lackluster beat and monotonous lyrics from X-Clan, the only thing that seemed to save the track was Medusa’s unmatched skills and wit. “Armageddon DNA” features L.A.’s Phoenix Orion and freestyler Supernatural on this track filled with references to themselves as “lyrical journeymen” as they show how their beings consist of this DNA that has been passed on from generation to generation. As X-Clan opted for a more abstract subject to rap about, one thing that is certain is that they chose the right artists to help further explore the concept.

“Still Up in the Game” features Poppa Doc and J-Napp as they help X-Clan show that they are still very much a part of the rap game after all these years. Brother J announces his return despite the animosity he receives as he says:

“I been in this game
For like sixteen plus
Blood, sweat, and tears
From van to tour bus
Before MySpace
Before online stores
Before gangster rap was the soup de jour…
I’m still up in the game
No matter how much hate you throw my way
I still stay the same
And just like the day I came
I’m a keep my stride and steer my lane”

Despite some far-fetched rhymes and lack of production throughout “Mainstream Outlawz” X-Clan redeems themselves as they diverge away from the rather mundane hip hop sound found in many of the tracks. Brother J displays his lyrical talents in “Pipers Poetry” as he delves deep into the idea of “conscious hip hop” and shows that poetry of the streets is street knowledge. As many X-Clan listeners are aware, a choice word of the group in “vainglorious” and their poetry is also referred to as such. Also, X-Clan adds a pleasant touch to “Wiz Degrees” as they take on a different approach to discuss woman while highlighting the positive aspects of a woman such as her wisdom and intelligence. While referring to this type of woman as an “example of a real lady,” X-Clan epitomizes the female and shows “you complement the we.”

Let’s face it. “Mainstream Outlawz” isn’t another “To the East, Blackwards,” but it has its moments of resurgence. Although X-Clan’s lyrics are still prolific, the production, on the other hand, is entirely dull. I couldn’t tell one track from the next as it sounded like one long song from beginning to end. Where is the creativity X-Clan once had? If it isn’t apparent that X-Clan has diverged from what they used to be known for, then know it’s the truth. It almost seems as though they have shied away from what they once knew. They have put behind the controversial subject matter and lyrics that made them popular as their attempt to create a more “family friendly” album has made them lose touch with their essence and character. While the “true school” concept isn’t the most innovative, X-Clan wants their “conscious” hip hop music to be accepted without the categorization of underground or mainstream, but at what cost?