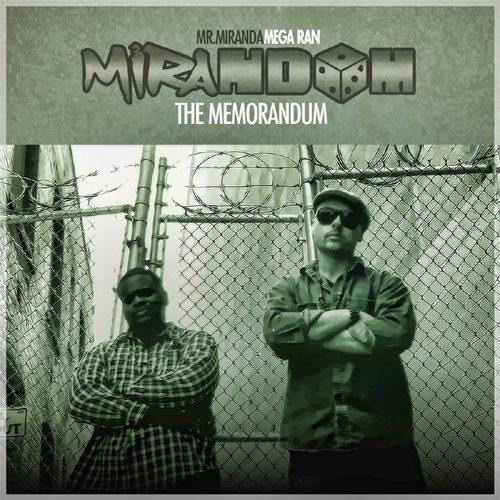 If it seems like we’re reviewing a Random project almost every week lately, don’t get mad. It may not be very random statistically speaking, but it can’t be helped given how prolific Random is, and how many projects he’s putting out before the end of 2011. Now you could in theory be mad about it were he putting out whack material, but by joyful coincidence Ran is one of the best underground rappers going. The only caveat to that axiom, if indeed there is one, may be that it helps to be a gamer when listening to some of his albums. Though he’s careful to avoid genre narrowing classifications like #nerdcore, he does intentionally or not cultivate a certain fanbase with albums inspired by Capcom & SquareSoft.

For Random fans looking for him to pull the cord on the controller and the plug on the console, “The Memorandum” may be exactly what you’re looking for. This time around the digitally animated concepts are kicked to the curb, and the focus us put on a partnership with Arizona’s own Mr. Miranda, who is geographically close enough to where Ran lives now that the two bump heads on a regular basis. Now whether that’s from being in similar cyphers or rocking the same local clubs, but “The Untold Story” paints a very different picture from either of those likely scenarios. Is it “untold” because they’re exaggerating, or “untold” because they’ve never spoken of it until now? Peep the verses and you be the judge.

Random: “They was in and out in 30 seconds flat
Must have cased the joint, cause they were very exact – BUT
On the way out, they bumped into this dude who was entering
He looked familiar, they got interesting
Just then I saw my bus idle on the corner
Dropped my Doritos, but not the bottled water
And I ran to the door, and at the same time
the police pulled up – told me put my hands high
I said – wait officer, you’ve got the wrong guy
as the real perpetrator, ran out the other side
As if I couldn’t get a more miserable ending
The cop’s telling me that we both fit a description
The bus is gone, I’m feeling like a lame
Everybody inside is thinkin that’s a damn shame
They cuffed me and stuffed me in the back of the whip
next to this guy – and we’ve been tight ever since”

Mr. Miranda: “Yeah, it all started on a Wednesday
Had just left karate class with my sensei
Asked him if he would give me a ride home
but he couldn’t so I guess it’s time to night roam
Walked to the bus stop and waited there lonely
Damn thank God I had my iPod on me
The stop across though was packed as ever
Saw a dude standin there in all black and leather
with some money in his hand, got bucks for somethin
Walked to 7/11, but his bus was comin
So I yelled out – YO MAN YOUR RIDE IS HERE
but he had some little headphones inside his ears”

In essence Random was just trying to catch a bus, and Miranda was just trying to make sure he didn’t miss it, and they both got accused of jacking the convenience store thanks to being in the wrong place at the wrong time. True, fictional or somewhere in between with some exaggeration, it’s a well told tale that’s so cinematic you can visualize every part of it without a music video to support it. That’s far from the exception on “The Memorandum,” as both emcees possess a depth of linguistic skill to borrow from in song creation. “Wednesday” is about how the real vacation day of the week might be the middle of it, the day after new releases come out, but even that day gets cancelled when Random gets called back in and he quips “I woulda been quit, if I wasn’t an invertebrate.” Aww damn.

The “Big Beat Jawn” is as you would expect a tribute to the classic Billy Squier track which has been well sampled throughout rap history. Miranda is snappin on lesser emcees: “I’m sick of hearin you guys/be assed out like Jamie Lee in +True Lies+/You little kids better wait for the outcome/but in the meantime just listen to this album.” While “Just Can’t Get Enough” borrows its name from the sample in the hook, it would also be an apt description of the raps from both artists. There are also some surprising collaborations on this 52 minute album – Fashawn and Mistah F.A.B. join in for uber-collective known as “Fabshawn and Mirandom.” There’s no clever posse name when Ilyas, Mystic Blu and Von Pea come through, but “Maintain” doesn’t need it. Rufus Pipes and Wisdom Soul also come correct when they come “Home.”

On the whole “The Memorandum” is a very enjoyable collaboration in and of itself, combining two rappers who generally have different agendas into one unit that compliments each other well – a little like a modern day 3rd Bass before MC Serch and Pete Nice broke up. Thanks to a good selection of beats by DN3, K-Murdock and others the album is a success. It’s good enough to suggest it could have even been better, but it’s far from average enough to suggest it’s not worth your time. It’s been a long year full of many “you should hear this one” albums not to skip, but even if it seems overwhelming to add just one more to the pile I’ve got to say “The Memorandum” is worth your while.