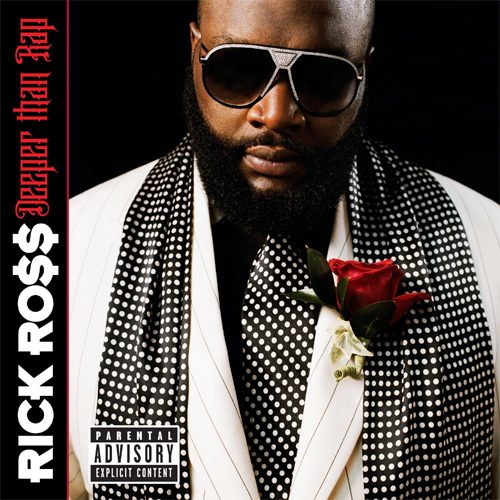 There’s a lot of things about modern rap music that I don’t like: from the simplistically produced rap records that dilute radio rotations every fifteen minutes on every station across the country to the uninteresting (and often drug-induced) “fresh new artists” that keep on spamming the e-mail inboxes of my fellow RapReviews staffers and myself, it’s a hassle to even put effort into listening to the records anymore.

The one thing that pisses me off THE MOST about today’s rappers, however, is their lack of authenticityâ€”especially when they lay so much claim to how “real” their records are. Most artistsâ€”Rick Ross among themâ€”would rather not discuss the lives they’ve actually led, and instead craft an image for themselves that compiles every gangster movie clichÃ© into the perfect hoodlumâ€”a Teflon don, if you will (sidenote: not surprisingly, Ross’s initial rap name was, in fact, Tephlon Da Don).

However, maybe the recent uncovering of Ross’s not-so-shady past as a corrections officer has done something to open up his heart to the masses as the first track off of his third effort, “Deeper Than Rap,” demonstrates:

“I got a feelin nigga, really that my money be the root
Look up at the stars, she like, “Honey, where the roof?”
Pull up, hear the dogs, canarie, they goin woof
Even once had a job pourin tar up on a roof
Dat boy had it hard, no facade, it’s the truth
So now when I manage and get massaged it’s the proof”

Titled “Mafia Music,” it set off a now long-winded rap war with 50 Cent when it leaked to the internet back in January. Over the deep organs, bouncy guitar riffs, and heavy drums provided by Virginia-based production duo The Inkredibles, Ross addresses everything associated with his “rise to power,” for lack of a better term. In fact, if anything, “Deeper Than Rap” is a surprisingly good album that shows the growth in the technical skill of a rapper often decried for his simplistic subject matter. He’s entertaining to listen to, as exemplified on “Maybach Music 2,” the T-Pain, Lil’ Wayne, and Kanye West-assisted sequel to last year’s much-talked about collaboration with Jay-Z. He displays a lyrical dexterity that he’s rarely displayed on either his debut “Port of Miami” or its follow-up, last year’s “Trilla”:

“Kush burn like petroleum, crib need custodians
Shades in all shades, these made of rhodium
Used to be the O smoke, hoes call it olo
Now I got so many horses bitches call me polo
5762, tell me how you wanna move
‘Ye, you know I got ’em both, beat ya ass black-and-blue
I was barely gettin’ pretty women
Now I scoop Emmy winners like kitty litter
Any winter, Fendi denim like a slimmer nigga
Lookin’ in the mirror, I can see the real contender
Celery and beef from Gregory, I’m on my dinner
So what the fuck is you tellin’ me other than ya gender?
I’m a boss and I’m ridin’ like a small boat
Niggas make ya wheels, I’m ridin’ till they fall off”

While he’s definitely stepped up his rap game, Ross is only really a voice on top of the production, which is some of the finest that I’ve heard this year. Provided mostly by three squads (the aforementioned The Inkredibles, J.U.S.T.I.C.E. League, and The Runners) with beats by DJ Toomp, Bigg D (of “Hello Brooklyn 2.0” fame), Drumma Boy, and C. “Tricky” Stewart, the production is a perfect reflection of Ross’s lyrical content. It creates a slick aesthetic without sounding overproduced, utilizing cleanly filtered samples to create a backdrop that sounds like the backdrop to Ross’s Miami lifestyle: “Maybach Music 2” features smooth saxophones and a frantic string section; the John Legend-assisted single “Magnificent” has airy synths playing over guitars and marimbas; and “Murda Mami” (which includes a guest appearance by Foxy Brown) grabs your attention with an ill guitar riff over crisp drums.

One of the album’s shining gems, however, has to be “Usual Suspects,” where Nas waxes poetic on his own ascent to the top from his humble beginnings:

“And still my talent is yet to be challenged
Had no jet with my own pilot, no blasting off with Flex or DJ Khaled
My mom stressing college
But my crude sense of logic did allude to my empty wallet
Try spitting on a green tinted Accord
Which could mean a sentence up north where the homie was
But back then dough was like a whore that Goldie love, it didn’t exist
And Officer Foley Cuffs was after my wrists
Was not Beverly Hills where we chilled
Imagine this, the Nazareth had to get from rags to rich
I used to stand on rooftops, with 2 glocks
Figuring, how do I turn my Timberlands to Crocs?
Now reptiles was left out, I’m ’bout a watch, what is you thinking?
Murk you, plus the muscle that you bringing is nothing to me
If you thugging or fake and shanked on Cuban, shout out my Ricans
Dealt with all of you gangstas, to the roughest Jamiacans and Haitians”

Again, Ross is simply a voice over the J.U.S.T.I.C.E. League’s ill production, and he gets completely served on his own record by a reinvigorated Esco, who sounds as hungry as he did on “The Message” back in ’96.

While a lot of Ross’s gangsta rings false in the face of the allegations regarding his personal life, his album certainly doesn’t suffer for it. It’s essentially a gangster movie on wax, and Ross is excellent in his role as the boss at the top of the heap with nothing to lose but his cool. However, he certainly gets outshined by the original scoreâ€”but that only serves to make a much better album than many anticipated from the Boss himself.