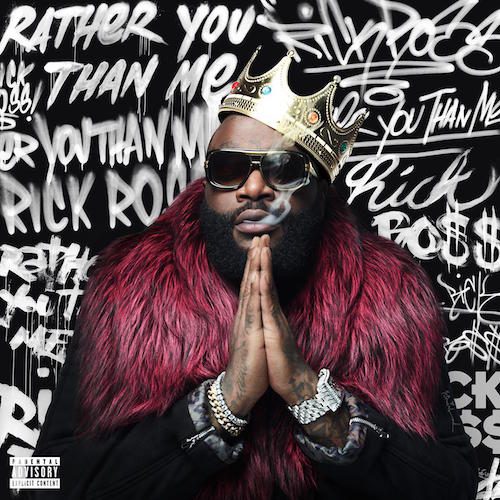 Rick Ross :: Rather You Than Me

I would have to guess he means his INAUGURAL address after being sworn in by the Chief Justice of the Supreme Court. Either way that’s one hell of a fantasy for William Leonard Roberts II, better known as Rick Ross, and if there’s one thing I’ve consistently enjoyed about Rozay over the years it’s that he’s a big dreamer. You wouldn’t catch me calling him the best rapper alive (he’s not top 25) or the best dead or alive (not even top 50) nor anywhere close to the most lyrical or most profound and thought-provoking. The fact of the matter though is that he’s entertaining to me, to the point that his average albums still get rotation and his good ones get more than that. He’s got two essential characteristics of a good rapper down pat over the last decade plus – a charismatic vocal delivery and the ability to weave a spell with the stories he tells.

I’m a bit of a sample fiend so when I heard the lead single for “Rather You Than Me” I immediately flashed back to the first time I ever heard “Swan Lake” by Blackalicious. That’s no surprise given that producers C-Gutta and J-Pilot looped The Stylistics’ “People Make the World Go Round.” You may also know it from Heather B’s “All Glocks Down,” EPMD’s “It Wasn’t Me, It Was the Fame” or even the Westside Connection’s aptly titled “Gangstas Make the World Go Round.” Suffice it to say this is hardly an original break to make into a song but as the old saying goes “If it ain’t broke don’t fix it.” Ty Dolla $ign provides the hook while Rozay spins his yarn about balling rich like only the biggest dreamers can.

“She stop me for a selfie, I just want the knowledge
Expressin what you think’ll send your kids to college
Or be a Geechi nigga just to keep the Bentley polished
Do it for the dear departed, f— a Ben Carson
Empire rented, you made a nigga a target
Only one that’s smokin up in Goldman Sachs
When I’m the only one that’s rollin like a quarterback
And I never put it in my government
Cause I never put on for the government”

I’m sensing a bit of a theme between this and the opening track “Apple of My Eye” though. Rick Ross seems to be taking a few potshots at Trump and his administration here and there, and while I wouldn’t say he’s going political, he’s definitely positioning himself as a “people’s champion.” Even though his Maybach Music empire probably puts him in a tax bracket closer to Trump’s than yours or mine, he’s still out there with his “name ringing like DJ Clue on a Friday night” and “sitting in the court with a sharp fade” fighting his latest legal battles as narrated on “Powers That Be” featuring Nas. It’s only when you pair William with Nasir that the major deficiencies of his writing and flow are clearly exposed for all to see, but that doesn’t mean you’re any less happy to hear them collab’ on SAP’s production. He fares better teaming with Wale and Young Thug over Yung Coke’s “Trap Trap Trap” beat where ironically he says “in the jungle I’m Nas.”

This one is definitely meant to be played at high volume in a residential neighborhood. I know that’s rude and all but some songs are just meant to shake the bass cannons in your car to the point people stop and turn their heads – this is one. Others are more the “cruising with the top down” kind of feeling, like the StreetRunner laced “Lamborghini Doors” featuring Anthony Hamilton and Meek Mill. You may have started to notice by now that features are prevalent in the tracks I’ve already mentioned, and in fact it’s not limited to just those – “Rather You Than Me” is LOADED with cameos. “Dead Presidents” has Future, Jeezy and Yo Gotti. “Maybach Music V” has Dej Loaf. “She on My D—” even features Gucci Mane, a rapper who (in my opinion anyway) makes Rick Ross sound like Talib Kweli by comparison, but Gucci relies on charisma even more than Rozay and he’s definitely got plenty of that. The only thing I can’t figure is if he was going to include Gucci, why not get 2 Chainz at the same time and have “Buy Back the Block” on the album? It’s lack of inclusion here is a bit mystifying.

My favorite track may actually be “Triple Platinum” though, produced by Analogic and The Olympicks, featuring former Jeezy affiliate Scrilla. The beat is the right mixture of deep bass and mellow piano keys, with those occasional stuttering “M-M-M-Maybach” drops that are a trademark of his songs. That’s where I bring the review full circle because this song embodies what I said I like about Rick Ross at the outset, with no need for apology or clarification beyond this – he’s dreaming big about success and then setting out to achieve it. He’s actually done a better job of translating his fantasy into reality than most people you’ll ever meet, but it’s the music that matters the most, and whether it’s real or not Rick Ross’ “Rather You Than Me” is fun to listen to.

Rick Ross :: Rather You Than Me
7Overall Score
Music7
Lyrics7