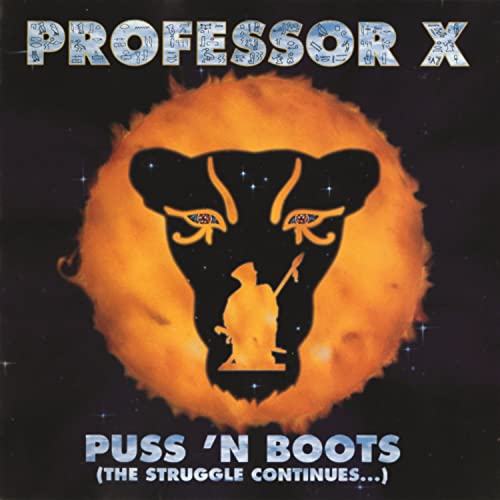 “Close the Crackhouse” is a testament to how respected (or at least well connected) Professor X and the Blackwatch Movement were in the early 1990’s. It probably doesn’t hurt that X was the son of famous civil rights activist Sonny Carson, but whatever reason it happened this is a massive posse track over nine minutes in length. Not counting members of the X-Clan themselves, the track includes Wise Intelligent (Poor Righteous Teachers), Big Daddy Kane, Digital Underground, Sister Souljah, Freedom Williams (C+C Music Factory), YZ, 2 Kings in a Cypher and MORE. They tried but failed to get the full cast into a music video for the song, and even that itself is over seven minutes long. Massive.

If there’s one reason to own “Puss ‘N Boots (The Struggle Continues…)” it’s this song. Unfortunately beyond that point the problems that were found on the last Professor X solo album come right back to the forefront. The album’s best moments are when Brother J takes the mic on songs like “They Don’t Know Jack,” because X himself can’t rap and shouldn’t try. “Little Jack Horner/back on the corner/proclaimed a goner.” It’s not just that X can’t muster anything better than nursery rhymes as a lyricist, its that his vocal tone jumps up and down in pitch like someone was squeezing his throat. While Brother J has a pleasantly deep baritone and impeccable breath control, X sounds like he should be “on the corner” with a megaphone shouting at people. I’m sure most of the time he was, but that does not a good rap artist make.

The good news is that this is not an especially long album, and due to X-Clan’s love of funk and soul, there are some songs which can carry the less than stellar Professor’s raps by sheer force. In fact on “Oshio” he actually comes close to what could be called “rapping,” which leads me to think Brother J was ghostwriting the bars and coaching him in vocal booth. He largely (but not completely) sticks to the tempo, rides the groove, and keeps his preacher exhortation tendencies in check on the beat. As a Professor X rap song goes, this almost works.

Other songs don’t fare as well. “Year of the Wreck” might be a more apt title than X intended, but “U Can Do Better” hits that nail on the head with a resounding thud. I’m not sure whose idea it was to name a song “Cum” but unless you were born Todd Shaw or Luther Campbell it’s not a wise choice. “Wine E Wine” is actually more overtly sexual though, and features some of the worse singers on a hook/chorus of all time. In the midst of his come ons he awkwardly tries to spit wisdom: “I’ll be damned if I participate in the sham/perpetrated upon the seeds of Abraham.” The only thing I can applaud him for is when he “I can’t stop until the body rock” and then promises to “go down.” I’m sure the woman O’ing on the song was pleased by that, but it’s still an incredibly awkward track.

The Blackwatch Movement was all about the struggle, but it’s also a struggle to listen to “Puss ‘N Boots (The Struggle Continues…).” The ellipses at the end of the title implies an incomplete though, which is exactly what Professor X sounds like when he raps — he trails off, regains his train of thought, and then resumes wherever he feels like it. I respect the heck out of the man, may he rest in peace, but the best thing about X-Clan was that he let Brother J do the talking while he came in to say “The red, the black, and the green — with a KEY! SISSSSSSY.” That’s all he should have ever been doing on tracks.