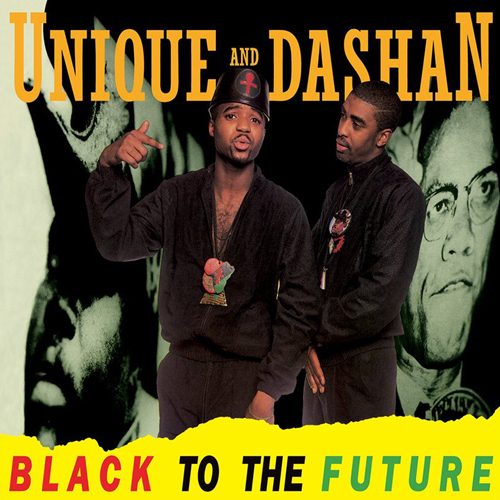 Unique and Dashan :: Black to the Future

“Black to the future – what a funky concept,” Def Jef pondered on his 1989 album “Just a Poet With Soul.” The native New Yorker had found a label and some success out west in Los Angeles. That same year Brooklyn duo Unique and Dashan had the same inspiration and called their debut LP “Black to the Future.” They raised the flag and sailed under the protection of the red, black and green. If that turn of phrase sounds somewhat familiar, it’s because you’ve heard the late Professor X on X Clan’s “To the East, Blackwards” and “Xodus.”

I may have been vaguely aware of Unique and Dashan and “Black to the Future,” spotting these names on some collector’s list or having seen the record itself many years ago. But I was completely unaware that this was in fact the starting point for the Blackwatch Movement. Only the 2011 Traffic Entertainment reissue enlightened me to the connection, the sticker on it calling it ‘The rarest of X-Clan’s Blackwatch Movement albums.’

You don’t have to wait long for Professor X to appear as his is the first voice to be heard on the album. He pops up seven more times, almost always with his trademark “Vanglorious / This is protected by the red, the black and the green / With a key / Sissyyyy!” Additionally, X (Lumumba Carson) and X Clan’s Paradise (Claude Grey) are credited for the production, alongside a certain H. Kennedy. I wouldn’t be suprised to learn that the latter was actually either Unique or Dashan, but I would be surprised if the Discogs database was correct, which would mean Mr. Kennedy also played keyboards on Too $hort’s independent tape “Players”… As you can see, reliable information on this release is scarce. The reissuers dedicate it ‘to the memory of Dashan, R.I.P.’ RapReviews.com would like to join the commemoration, but we’ll admit that we have no information regarding the circumstances of Dashan’s demise.

One thing’s for sure, he’s alive and well on “Black to the Future,” complementing the standard ’80s MC/DJ duo. He even grabs the mic on the posse cut “Three the Hard Way,” introducing himself as “the DJ that loves to rap.” “Three the Hard Way” is completed by MC Buggs, the group’s human beatbox and ragga toaster who emcees the dancehall track “Lumumba.” The rest of the airtime belongs to Unique, a youthful, optimistic voice and typical second-row late ’80s MC. He’s down for the cause from the jump, rapping breathlessly along the party line on “Protected By the Red Black and Green” to a rumbling track (whose backbone some might recognize from Souls of Mischief’s “Limitations”):

“Now our people are bein’ destroyed all across this land
But you wouldn’t know that it was a part of the government’s plan
Some people live in poverty while others are livin’ in wealth
How could we think about helpin’ South Africa when we can’t even help ourselves?
‘USA for Africa’ – somebody out there lied
Cause major companies in this country still support apartheid
So don’t take things at face value, confirm them first
Cause what you think is the best, it might just be the worst
Like for instance, crack is takin’ over everyone
that tried it once and now they addicted cause they thought it was fun
But if you dig a little deeper you will find out more
Vanglorious will teach you, that’s what we’re here for
But I will never get trapped in a negative realm, if you know what I mean
Cause I’m protected by the red, black and green”

The righteous rhetoric continues on “Blackwatch,” as Unique details his vision of “a nation of blackmen” “where brothers and sisters all join together / to form a unit that’s tougher than leather” over a slick but booming beat that also acts as a dance track with its cut up “Dance with me” line. He ends “Blackwatch” with a strong salute to another self-proclaimed ‘nation’ that aims to represent black interests, the Nation of Islam.

That also concludes the album’s political section. The only single happens to be “House Is Taking Over.” (Possibly only available in Germany.) It’s a hip-house track featuring an outside producer and vocalist, in all likeliness initiated by Warlock Records, who previously had struck gold with the Jungle Brothers’ “I’ll House You.” Curiously enough, “I’ll House You” producer Todd Terry hooks up a hundred-proof hip-hop beat for “Double Trouble,” a humorous tale about having your cake and eating it too.

The remaining three tracks aim to boost the Great Unique’s (as he dubs himself) profile as a rapper. He takes verbal violence a step too far on the graphic “Brutalization,” contrasting with the upbeat track, but laces the “N.T.” drums-rocking “Versatility” with lines like “I’m puttin’ heads to bed without dinner / Hittin’ like Tyson and I’m always the winner,” while “Poet in His Own Time” with its smooth jazzy beat and effortless battling and boasting measures up to Flavor Unit greatness.

There’s great footage of Unique and Dashan online, Unique dropping acapella rhymes on the stoop on Willoughby Avenue with the crew. Judging from the exclamation “1990 we blowin’ up” and the double rhymes, these raps likely would have ended up on a sophomore album. For whatever reason it was not to be. In 1990, the attention was on the newly emerged X Clan, and rightfully so. “To the East, Blackwards” and “Black to the Future” are worlds apart on all levels. It’s almost as if “Black to the Future” was the trial balloon for both Professor X’s Blackwatch organization and his team’s production abilities. Unique and Dashan were still your regular rap act, whereas X Clan was truly something else. Still there’s an undeniable charm to “Black to the Future” and its fresh and quirky lead vocalist.