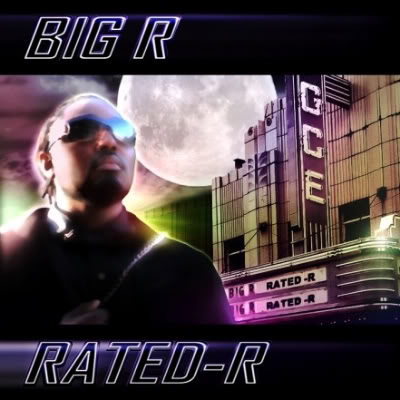 As a rapper, businessman, and pastor, Florida’s Big R has fully immersed himself in his beliefs and spirituality. While in college, Big R was re-born with a new passion for life and his music and decided to embark on music with a purpose. Feeling as though it was his destiny to take on such an arduous task, Big R embraced his talents, using them in the most positive way possible.

Big R emerged onto the Christian rap scene with his 2005 debut album, “Let ‘Em Go,” which helped his career immensely as he gained radio play and won awards. As the newest member of the Godchaserz Entertainment family, he releases his second album, “Rated-R,” featuring production from Tony Stone Beats, GodChaserz Entertainment, Beatlab 7, and Genuine Life Productions.

As the introduction begins to “Rated-R,” it’s clear that Big R’s concept for this album was to set it up as though it were a movie set while incorporating a few skits to further integrate the idea. Although the concept makes sense, the design is a bit lost throughout the album as the idea isn’t revisited enough. By the end of the album, I almost forgot the whole theme as the transition from one track to the next did not chronicle a story at all.

The album’s title track quickly surfaces as Big R attempts to clarify the underlying message of the lack of acceptance for Christian hip hop and the need for tolerance with his music as he says:

“Even Condi Rice, even 50 Cent
Need a real God-Unit
So I’m a put you down with the real G-Unit
God is steel
You can’t break him
Like the herpes you can’t shake them
Lord, so omnipotent
When Big-R speak you know God done spoke it
Check it, I was talking to some fake thugs
And they was laughing at how the R show love
Just the other day a DJ rejected my song
Because it had the Christ word playing in it
Now that’s wrong
Now all these fake Jay-Z’s, and Weezy’s
and Jeezy’s get on the stations
But they don’t last long”

With a sample of Big R’s lyricism, it is clear that “Rated-R” isn’t the Christian hip hop many are used to. When I think of Christian hip hop, artists such as LA Symphony, Pigeon John, and The Procussions come to mind as they have shaped the spiritual genre of music, as some would call it. These artists get their message across without being too “religious,” but instead, convey a positive message of spirituality and hope. With this in mind, “Rated-R” is the complete polar opposite with its preaching from track to track and overly used religious references. Although Big R is in fact a pastor, his devout teachings are a bit intimidating for the average listener.

As Big R preaches, he continues to establish the ongoing message of turning to Christ when times are tough. While the content and subject matter are repetitive from one track to the next, Big R’s constant yearning for acceptance is a bit draining at times. Tracks such as “Re-Up,” “Hold it Down,” and “I Wanna Win” provide some soul searching messages surrounding Christ while “Love You Better” and “Mr. Secular” offers a more personal glimpse into Big R’s self-reflection. The finale to “Rated-R” has an even more blatant message to put Christ first as Big R insists on everyone recognizing that “you are a sinner and bound to a life of destruction without Him.” Big R even provides his personal cell phone number for anyone seeking salvation.

Clearly, the message is neither understated nor discreet. The word of Jesus manifests throughout “Rated-R,” but perhaps a more prudent approach would make listeners a little more comfortable. It’s evident that Big R’s relationship with the church and his values supersede other aspects in his life as he conveys his message with strength in “Rated-R.” Big R maintains the talent to express his values through his lyricism while remaining true to himself as he is able to bring a sense of humor and lightheartedness at times. However, his message is rather too robust with his constant preaching while disregarding those who do not follow the same beliefs. To each his own. All I know is that it just seems wrong to have God and herpes in the same sentence.