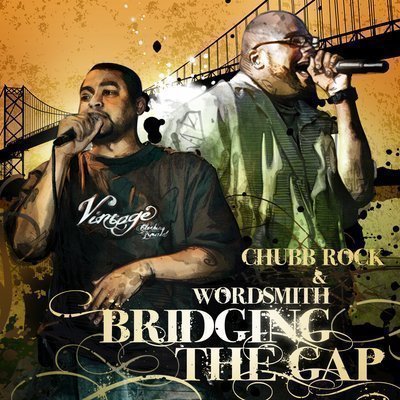 When Chubb Rock spits, “Obi-Wan playa, here with young Anakin” three tracks into he and Wordsmith’s “Bridging the Gap” he isn’t just blowing smoke up your ass. Setting aside the questionable quality of George Lucas’ Star Wars prequels, the metaphor is a fitting one. Chubb Rock and Wordsmith aren’t bad guys, using their microphone skills for lyrical homicide or subliminal violence. Like the heroic Jedi Chubb references it isn’t as if this duo couldn’t set 90% of the gangasta rap world on fire should they choose, shit both these guys have lightsabers for tongues, but they both stand for something greater than their own glorification. A love for words, storytelling, and, most importantly, hip hop.

Things kick off with the “HipHop Luv Remix” setting the tone for the throw back vibe of the whole release. “Bridging the Gap,” the album as well as its title track, takes two lyrical artists with roots in different generations and blends their respective talents together to show the connections between old school and new school hip hop. Right off the top this record’s strengths and weaknesses are glaringly obvious. Both Chubb Rock and Wordsmith are masters of form, metaphor, and punch lines, each with their own respective voices but with a common sense of cocky humor that lets you know they’re taking this shit seriously. However in the quest to “Bridge the Gap” Chubb Rock often seems content to fall back on the same patterns of references to old school artists and hip hop history that begins to get old about half way through the second listen. Much like it’s interesting to hear your great grand-pa tell stories about the War once, Chubb’s incessant “back in the day” lyrics distract from the amazing vocal fire he lets go when he’s simply flowing. “Live From the Go-Go,” “Soul Baby Blues,” and “Jealously Thing” are great representations of what the Obi-Wan of this duo is capable of when he’s not stuck recounting how good shit was back in the day.

Chubb gets props however for being one of the few hip hop artists in the world to make reference to homosexuals as human beings and instead of just hatefully refering to them as faggots. On the opposite lyrical side of the spectrum is Wordsmith who takes the out of the 90’s Casio plus bass production that marks so much of the record and makes it his own. Wordsmith’s battle rap inflected delivery has an off the cuff slyness and speed that contrasts nicely to the laid back delivery Chubb Rock provides as he rides the beat. You can’t help but feel the hunger in â€˜smith’s bars, like he knew he was going to be working with an artist he respected and wanted to bring his A game, and it ends up the same way Obi-Wan and (the future Darth Vader) Anakin’s relationship does, with Chubb Rock getting shown up by his apprentice in front of an audience. Chubb Rock’s still a Jedi, but I’ll be damned if he’s showing it 100% on this record. The blame doesn’t lay solely on the artist though this time around. Some of it rests with the incredibly inconsistent production.

Nostalgia is a bitch, and while it might sound like a great idea to craft a whole record around 90’s throwback beats the reality of this idea is a different matter. The laid back “Chocolate City Part 1″‘s beat is a sparse groove of keys and snare that might work as serviceable filler, but when it’s immediately partnered with “Chocolate City Part 2” and its nearly identical beat it adds up to seven and a half minutes of momentum killing mediocrity. There are certain aspects of 90’s production that I’m a fan of, but they rarely make an appearance here. Strada’s work on “Bridging the Gap” provides the kind of funk bass samples that Dr. Dre mastered before he went into seclusion as well as a production highlight for the record. But for every “Bridging the Gap” or “Ol Skool Flava,” an equally killer bit of constantly shifting beats that pays tribute old school classic, there’s a “Soulmates” or “Clay Davis.” Records Skee-Lo would have passed on.

On one hand the dedication to old school beats is impressive, but if this record was truly about “Bridging the Gap” wouldn’t it have made sense to at least have a sprinkling of modern production? I don’t need a beat from a big name producer but isn’t there a young up and comer out there that would kill for the chance to lay down a track for these two lyrical heavyweights? If the point of “Bridging the Gap” was facilitating a love of old school hip hop in new school fans its affect is going to be negligible. There’s just not enough weight to the production to make an impact, and kids these days think old school is the “Slim Shady LP.” Fans of Chubb Rock or Wordsmith are going to find a good time, but for the rest of us they’ve still got a ways to go before they completely bridge this generation gap.