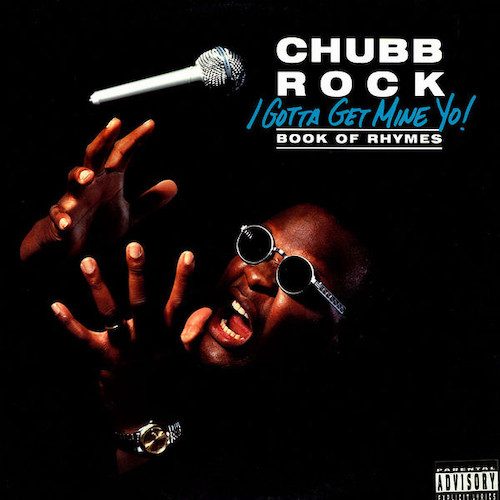 I Gotta Get Mine Yo!

Chubb Rock :: I Gotta Get Mine Yo!

In a previous iteration of this publication, we specifically labeled reviews such as this as Back to the Lab. Then as now the phrase implied a look back at a hip-hop release from a different era, often one the writer remembered fondly, but sometimes one that had not aged well in the intervening years. Happily for me when I looked back on Chubb Rock’s “The One” in 2012 his album had aged quite well. The physically and mentally large in stature rapper was ably assisted by Hitman Howie Tee in crafting an album that stood the test of time by the quality of both commercial hits like “The Chubbster” and cautionary street tales like “The Night Scene”. The fact that rapper born Richard Simpson was a National Merit Scholar and pre-med student before his rap career took off oozed out of every pore of the album. To put it succinctly, in an era where skill matter, Chubbs had ‘NUFF skill.

The breakthrough to the airwaves and MTV of Chubb’s third album necessitated a follow up, and two years later “I Gotta Get Mine Yo!” was the response. The choice to subtitle it “Book of Rhymes” was not accidental, as Chubbster put serious thought into each bar he spit and reflected it by including the lyrics inside. This wasn’t exactly a common occurrence in those days. Other than Public Enemy albums (one of which comically described Flavor Flav as saying “as lamem likum” instead of “asalaam alaikum”) very few artists or their record labels bothered to include them — probably because of the printing costs but more likely because they assumed the fans didn’t care. Even on a pop song like “Lost in the Storm” though, borrowing heavily from “The Humpty Dance” and “Sing a Simple Song” for its sound, Chubbster still cared deeply.

“Well it’s ninety-two we will make it to ninety-three
With no P-E, A-C-E
It won’t happen so stop your damn finger tappin
Find the music of peace and start rappin
The answer lies in your hearts then your minds
And maybe then we can save human kind”

Those are incredibly lofty ambitions for a musician, but Chubb Rock never sold himself short in any way. Produced entirely by Chubb himself alongside The Trackmasters, “I Gotta Get Mine Yo!” is (likes its predecessor) as remarkable for the album tracks as the mainstream singles. “3 Men at Chung King” is as worthy a tribute to the now defunct legendary studio as any rap track I can think of, thanks not only to the quintessentially 90’s head nodding beat but the lineup of Red Hot Lover Lover Tone, Grand Puba and Chubbster himself. Chubb always seems to end up on the illest posse tracks and this one is no exception. “We shoulda did one sooner” is some of the truest words Mr. Simpson ever said.

Speaking of posse tracks though, I’ve always been fond of Chubb Rock’s comical voice as “MC Nasal” on the track “Don’t Drink the Milk” featuring Kurt Gowdy and Poke from the aforementioned Trackmasters. Despite the fact he’s purposefully messing with his own flow, the lyrics he’s spitting are just as potent as any on the album. Chubbster is pointing a finger directly at racists who like bad milk “spoil” anything they come into contact with.

“You see the niggaz yo, dead in the woodwork
Cause of these KKK jerks
And I’m vexed, real vexed, let me tell y’all
While I kick it from the cellular
Well I’m the Nasal on the scene and fuck it
I hate cream in my coffee, so take your fuckin redneck off me
Concerning that Mississippi, stop that fuckin Burning
While I’m over here chillin, ready steady learning”

He even brings the persona back to add much needed levity to the otherwise somber “I Need Some Blow”. MC Nasal has to liquidate all of his possessions and steal from friends and family just to feed the growing habit that gave him that nasally vocal style.

On a more serious tip though “I’m the Man” makes any short list you want to draw up of funky rap songs from the 90’s. Punctuated by a hook that samples “Light My Fire”, Chubb Rock paints a picture of success that has nothing to do with material wealth and everything to do with the fact his mind is as sharp as the crease on his fresh wears. How many rappers do you hear drop the word “horticulture” in their bars? None.

“All over the commercial hard like Herschel
The verse will insult but don’t take it personal
Everybody knows that I’m the man and
Always got a positive plan for the fans
First concerns as the world turns
To expose the racists like Howard Stern
George Burns, oh my God, takes a black comedian and he learns
Make more greens than ferns
Horticulture is not my main subject
The subject is microphone check one two
And you don’t stop the royalty fees
The Chubbster you know he’s (gonna set the night on fire)…”

If one could knock Chubb Rock for anything it might be that he took his role so seriously. Even though the song has a decided early 90’s New Jack Swing, “My Brother” is an urgent request for peace and unity in the black community. It’s also a little odd that such an earnest song comes off like a club track, but perhaps not nearly as odd as it being followed up immediately by the quite storm meets Billy Squier anthem “I Don’t Want to Be Lonely”. Don’t be mistaken for thinking that either of these songs are “bad” per se, but they do show that Chubb may have been feeling pressure to repeat his commercial success of the past. On the title track he even opines “I really don’t know if I really deserve this” as though he himself is surprised by his meteoric rise.

Trust me Mr. Simpson, you do. Unfortunately for the Chubbster the rap scene around this time started to get really hard really quick, with a burgeoning rivalry between East and West coasts starting to squeeze out more positive emcees who weren’t interested in either (A.) beefing with the opposite side or (B.) proclaiming dominance of their own side. For a heartfelt intellectual rapper like Chubb Rock the commercial decline of the 1990’s is perhaps no surprise, but before he re-emerged as a Crooklyn Dodger he left us this LP as another testament to his strength. “I Gotta Get Mine Yo!” is unfairly overlooked and deserves far more praise.

Chubb Rock :: I Gotta Get Mine Yo!
8Overall Score
Music8
Lyrics8