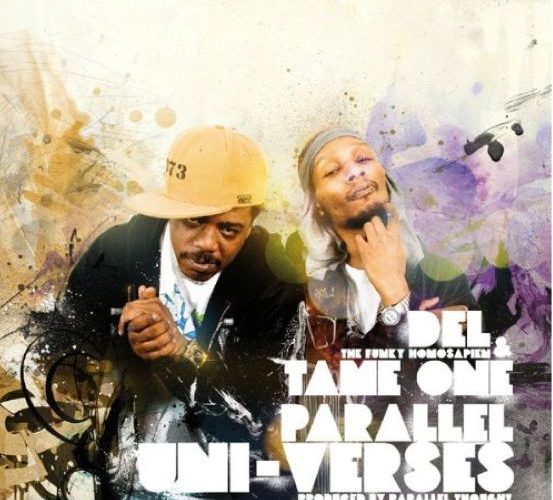 The year of hip-hop superteams continues. We’ve already had the all-star Slaughterhouseteam, the New York dynamic duo of KRS-One & Buckshot, the Brooklyn to Boston duo ofMasta Ace & Edo.G among others, and at long last it’s time for Del the Funky Homosapien and Tame One to take their turn. Wait… Del and Tame? In terms of dusted, bugged out unconventional rap flows, there may not be any two rappers on Earth more well met than Tame and Del. Each one has cultivated their following over the years amongst the populace and their peers by doing shit their own way, sometimes in direct opposition to being commercially viable. No one has ever said “Fuck Del/Tame, all they do is bubblegum pop rap, that shit is garbage.” These two rappers are creativity personified.

Del has tasted more success of the two though, due in part to the Hieroglyphics crew’s strength and in part to simply being out there consistently over the years – always putting out new albums and touring. I’ve seen Del live twice now, and even though I’ve talked to Tame’s mom on the phone, I haven’t had the pleasure of seeing him in person once. Let’s be blunt about it, no pun intended, Tame has often been his own worst enemy. Del has cultivated a network of like-minded artists, hip record labels, underground rap blogs and concert venues to constantly keep him on blast. Tame cultivated his love of pharmaceuticals – ‘shrooms, dusted Phillies, ganja, and more things than either his P.O. or I can keep track of. While the chemical additives may have expanded his mind to newfound lyrical heights, it has seemingly come at the expense of releasing albums regularly or hitting the road in support of them. I’ve been a fan of both artists since the early 1990’s, I anticipate their new solo projects equally, but Del is the one hip-hop fans can count on commercially while Tame’s albums are hard to get and often out of print.

“Parallel Uni-Verses” is a fresh start for Tame and more of the same for Del. The first single “Flashback” embodies the shared history of hip-hop the two experienced on separate coasts, Del from the West and Tame from the East, each equally relevant to making them the funky rappers they are today. Parallel Thoughts laced up the bopping, swinging, fat as fuck funk that Tame One and Del (son) flow over, and the turntablist scratching on the beat should get a plug too. The chorus of the song opened this review and really describes the vibe these two are on nicely – even though they’re flashing back in the day to their old school roots, they still “fast forward” to the present and keep you up to speed with their flows. That same vibe is embodied nicely over the heavy bass and cowbells of “I Am…” with Tame opening the song with his typically scattershot and super-creative verbal. By turns Tame self-deprecatingly makes fun of his drug use and shows off his skills:

“The walking court case in a North Face goose vest
Peace to oh-seven-one-oh-two tech
The one deuce met, I got embalming fluid breath
I’m +Bak-N-Effek+ like Skoob and Drayz
High enough to lose some days
Test motherfuckers like some Q&A’s
You will be graded against the learning curve
Music at thirty-three and a third!
[…]
I clutter my lungs, fuckin with sons/suns
with gravitational pull shit, bullshit ’til I’m done
Reversin the Earth backwards
Readjust the timelines just to save a hoe
… since Maseo was on the radio”

Del’s braggadocious over the end of the track is some shit you’ve never heard before. He’s not just claiming to be better than inferior rappers, he’s telling them that they’re so weak in breath control that they can’t even rap over it as fast as Chubb Rock “and he a big motherfucker!” That’s harsh but true, since few people could handle the tempo with the ease Del and Tame do. Few would be as honest about their nerdier pursuits either, as Del openly raps on “Before This” about his pursuits outside of wanting to rap.

“Growing up in Oakland, spittin for the whole district
Gifted student, but didn’t do shit but ill out!
Stealin comics and f’real to be honest anything else I wanted
Atari 2600 cartridges I hunted down!
Nintendo games when that came in
But before that, I ignored class
Snored in the back in the dumbhead section
Writin war raps; jaws get tapped, lunch money gets snatched
My sixth grade teacher believed I wasn’t stupid
Got through my thick skull with computers”

The song titles betray how far advanced the steelo Tame and Del flow on “Parallel Uni-Verses,” as you may read names like “We Taking Over” and “Special” and question if you haven’t heard these sentiments before.TRUST ME YOU HAVEN’T. There is absolutely nothing conventional about any song on this album, from the beats they’re rapping on to the verbiage of the song to the way the words are delivered. At times it borders on being spoken word poetry as opposed to hip-hop, but Del and Tame manage to take it from way out in left field and bring it back to home plate just in time every time to put heads out. I feel ashamed I can’t give some of the behind the scenes crew who helped them create this outstanding album together, but I’m not ashamed to say “Parallel Uni-Verses” is the perfect title to describe this album. Tame and Del are like-minded rappers who have been heading in the same direction for years musically without having crossed paths. Now that they’ve finally linked their styles together in tandem, it’s a blessing to all of their old fans and soon to be new ones.