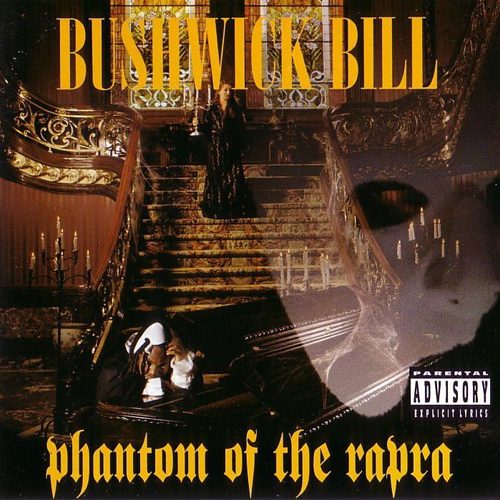 Bushwick Bill :: Phantom of the Rapra

When I was a bit younger, I had a friend that lived about two houses down from me. He was one of those folks that always wanted to borrow something. It could have been my Carhartt coat, my blue Shaquille O’Neal jersey, or even my Huffy White Heat bicycle. For all the things that I loaned out with no particular return date, I lucked up when he let me borrow a couple of his CDs. One of those albums was the sophomore LP from the Geto Boys’ own version of Chuckie, the one and only Bushwick Bill. I was fairly familiar with his previous work from when I’d hang out with the older kids on the front porch all day and night during summer vacation from school, but I still mostly knew him as the guy who shot his eye out. This album exposed me to much more than that.

“Phantom of the Rapra” opens with “Phantom’s Theme” which features a woman interviewing Bill in order to put together a new bio. She asks him about the reasoning behind the name of the album. He goes on to tell her that he is a fan of opera which “deals with sex, rape, violence, incest, and suicide”, but yet and still it’s accepted by those who were willing to ban rap music, when “rap is opera to people in the ghetto”. Echoing banshee screams, explosions, flickering embers, and a haunting organ provide the perfect backdrop for “What Cha Gonna Do?” as Bushwick raps:

“Put me in a room with four gats and four clips
Aimed at my dome and I bet I won’t flinch
At least I get to know I’m going out in a blast
So either pull the trigger or you tricks better mash
Cause I ain’t afraid to kill neither
I snatch your soul like the motherfuckin’ grim reaper
[…]
I’m on the verge of suicide, so what’s murder?
Another casualty, cause mentally I’m damaged G
So I ain’t afraid, I ain’t afraid to kill
And I ain’t afraid to die, muthafucka!”

The production on the album is on point and suits Bushwick perfectly. Being the veteran MC, Bill is able to adapt to the track and make it work for him. Sometimes he’ll come with a more laid back flow, like on his symposium on overcoming poverty, “Times Is Hard”. On other occasions, things get a bit more aggressive. This is the case with “Who’s The Biggest?”, which was the lead single from the album, as Bill flows:

“Bushwick, aka Chuck, four foot eight and straight don’t give a fuck
I got the strength of six men
With the heart to run up on a muthafucka six ten
I swear, I knows no fear, this labels me a threat
Throats get cut, niggas chests get wet
Some people say I got a short complex, that ain’t true
But I got a short fuse so what’s next?
Now we could go toe to toe or shoulder to nut
Either way it goes you’re gettin’ fucked
Cause you trip and try to size me
And that type of shit just inspires me”

“The Bushwicken” and “Already Dead” are the straight up horrorcore joints on the album, and while they do well to satisfy fans of Dr. Wolfgang Von Bushwick’s earlier work in the genre, Bushwick shines the brightest when he’s in narrative mode. This is most evident with “Ex-Girlfriend” and “Only God Knows”, with the former being about Bill’s access to lovers past and the latter questioning just how we will all die. “Only God Knows” employs a sample from the late, great Isaac Hayes’ “Walk On By”, as Bill asks:

“What is life and just how long will it last?
Will you be happy and satisfied when you’ve passed?
Will you die young or old and wise?
If you face your killer will there be tears in your eyes?
Will you holler and beg? Scream and crawl?
Will you die like a bitch or stand tall through it all?
Will you fight if you’re given’ the chance?
Or will you ball up like a baby and shit in your pants?
Damn..!
We’ll never know until it’s your time Loc
You’ll never know what you gon’ do until that ass get smoked
So you can miss me with that tough man trash
Until you’re layin’ in the streets with hollow tips in that ass”

The requisite weed smoking song, “Inhale Exhale” and “Mr. President” close out the album. The latter is a diatribe against the social and political hypocrisy that has been pointed out by many over the years in both hip-hop and other forms of mass media. 3D spits the verses while Bushwick provides spoken pieces between them. They both make several valid discussion points here:

3D: “Hello Mr. President, residents of the White House, excuse me
I’d like to know, have you ever enjoyed an old-time gangster movie?
With the white man ringin shots on blocks
With their clean shave and pin strip-suits
Bootleggin-whiskey-rapin-black-women-and-havin-a-fat-stack-of-loot
Undercover David Duke, isn’t it true
The gangster movement started long before my time
Long before the hair rag, gangster sag
Finger signs and love for nines?”

Bushwick: “What you don’t realize is that you’re jerkin yourself
Killin’ your own existence
You’re all walking dead men, and don’t know it
With book sense and street sense
If you had street intelligence
You would really know
That you’re one footstep between life and death
That the mouth is a open grave
And you’ve offered me the right to elect you to a bullet
Which is a straight shot to the top, right?
And what goes up must come down
That’s why it’s goin down right now
You can smell the smoke
See the flames
And see the bodies that are left on the ground
Because the flag
Red, white and blue
And the stars from all the years you’ve whupped me and mines”

Perhaps it was bad timing, lack of marketing, or just sheer ignorance, but for some reason this album did not garner the attention that it deserved. While “Phantom of the Rapra” covers all the popular topics including drugs, misogyny, violence, and social commentary…it is Bushwick Bill’s ability to lure the listener into his world that makes this album a pleasure to listen to. His passion for his craft makes even his most audacious boasts seem damn near believable. It is this passion that has kept “Rapra” in my heavy rotation for nearly fourteen years, and likely many more to come. I just hope my homeboy doesn’t want his CD back just yet.