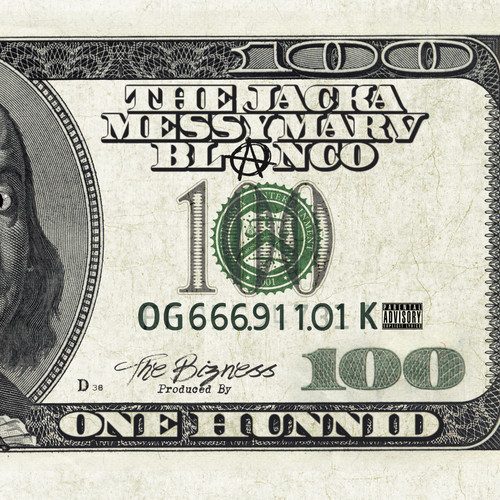 Normally albums featuring Blanco & The Jacka are the purview of long-time RR contributor Messy Marv to the mix, making this a Bay Area supercrew of sorts. Of course The Jacka has been super all along – getting some rare “nines” from other long-time contributors like DJ Complejo. It was only natural I get my piece of this pie when “One Hunnid” came across my desk – and at seven tracks long it was not a hard bite to swallow.

“One Hunnid” is certainly rich in calories though, packing 36 minutes into the material found here, with two songs clocking in at over six minutes long and two more being over five. That’s like ordering a cheddar onion from the dollar menu and getting a Big Mac in your box. (Side note – eating either one probably isn’t that good for you, but unless you’re a vegan reading this review there aren’t many of us who would turn down that free upgrade.) You’d have to call this an album – it’s just too damn big to be an EP. It’s also heavy on the guest appearances though, which almost seems like overkill given they already added Messy Marv to the mix, but who says you can have too much of a good thing? That has to be the philosophy on adding Mistah F.A.B. and Trae Tha Truth to the song “Reaganomics.”

Trae: “Fo’ niggaz, one room, the trap jumpin bitch
Pockets under construction with a couple bricks
Black carpet, trash bags, fuck a duffel bitch
Hit the mall and let money fight until it scuffle bitch
I had dreams of a nigga famous, now a nigga that
I cain’t focus without these cheese, tell ’em picture that
Nolan Ryan off in the dugout, I can pitch you that
Green purple mollies or coke, I can get you that”

Fans of the Yay hustle of Blanco and The Jacka might be surprised that Philly gangster Freeway joins into this California shit on “The Grassy Knoll.” Given they all have a penchant for hustling and making ends meet by any means he’s actually a perfect fit, as is Nipsey Hussle on the mellow grooves of “Change” and YG on the album’s longest opus “9/11.” The latter sounds like it’s ripped straight off a Curtis Mayfield soundtrack, and I can’t help but bop my head to the beat. In fact the whole album has a smooth cruising feel to it, which is good timing given the weather is just starting to warm up outside. Can you argue it’s profound? Well there is a not-subtle political undercurrent to calling songs “Reaganomics” and “9/11” and a few samples to back it up, but if you take a theme from it, it’s just that from the 1980’s until now the rich got richer and the poor got poorer. Albums like “One Hunnid” assure that these three men won’t stay broke any time soon.