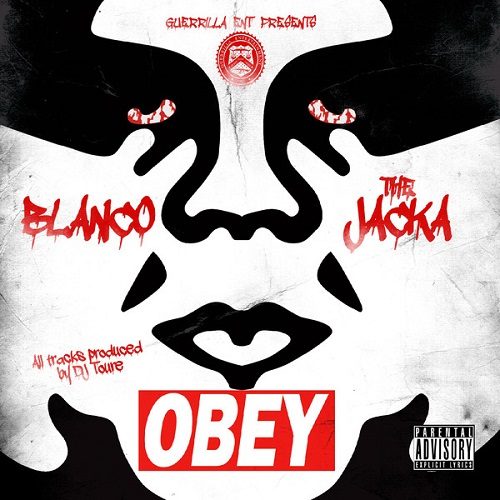 Having a talent for rap music doesn’t necessarily mean spitting the sickest shit since swine flu. As a rapper, Berkeley’s Blanco wouldn’t make my top 10’000, but he managed to sell me two of his projects within six months. After “Cookies ‘n Cream” with Yukmouth, “Obey” co-starring The Jacka is another 7-tracker that piqued my interest. The artwork incorporates Shepard Fairey’s ‘Andre the Giant’ street art campaign, which in turn was inspired by the John Carpenter film ‘They Live.’ “Obey” combines both these points of reference by naming all songs after the hidden messages Roddy Piper’s character in ‘They Live’ discovers on billboards, posters, screens, store signs, etc., revealing an alien regime that rules the planet subliminally via mass media.

“Obey”‘s opening and closing tracks are called “Submit” and “Do Not Question Authority,” for instance. The point is that the titles have no seeming connection to the songs. Like the guy in ‘They Live’ I had to do a double-take when I read what these songs were called and who they featured. It got me thinking. Imagine pop and rap music as part of a worldwide operation to control the masses with subtext that subconsciously seeps into our psyche. Actually a mild form of such manipulation has been in effect since rappers first started namedropping brands in their songs. And people of a more radical mindset have speculated that the rap industry has been enigneered to service the prison-industrial complex by promoting criminal lifestyles. When looking at the whole rap rigmarole one may be indeed compelled to ask like that old Souls of Mischief song – “Tell Me Who Profits.”

Speaking of the Hieroglyphics crew, DJ TourÃ© is the EP’s musical director, supplying the rappers with sample-based beats that possess plenty of character. Loose percussion turns “Submit” into a freewheeling piece of rider music. The dark, plodding “This Is Your God” sounds like something off an early 00’s Eastern Conference record (one of which, Cage’s “Movies For the Blind,” paid visually homage to ‘They Live’). “No Imagination” must have flown under Curren$y’s radar. “Conform” owes its elegance to a Curtis Mayfield sample. For “Consume” TourÃ© has been digging in the same crates as D.I.T.C. – and tacks some Jay-Z cuts on it because that’s how you do it. His only obvious faux-pas are the blunt drums mixed irritatingly close to the ear that distract from the cool swing sample in “Do Not Question Authority.”

So what exactly is being discussed over TourÃ©’s beats? Illegal business, substance abuse, status symbols, court cases, easy girls, fallen soldiers, turf politics, that’s what. While The Jacka, Mistah F.A.B. or Freeway have in the past displayed political sensibilities, “Obey” is not their Occupy movement. There’s the occasional self-aware moment (notably from Blanco), but that’s it. Perhaps the project is more effective that way. It makes you pause to think about an underlying message to these rap songs, not just those on “Obey” but also the whole entire rest of ’em. And afterwards you’re free to pursue some good ol’ thug rap that can do without club tracks and at the same time proves how open-minded Bay Area rap has become, considering three cameos from Philadelphia’s Freeway, seperate features from all Strong Arm Steady members, contributions from local stalwarts Dru Down and Messy Marv, TourÃ©’s tracks rooted in East Coast hip-hop and the way it actually works. With two more street art-themed EPs from the duo underway, Blanco can put me down for two more pre-orders.