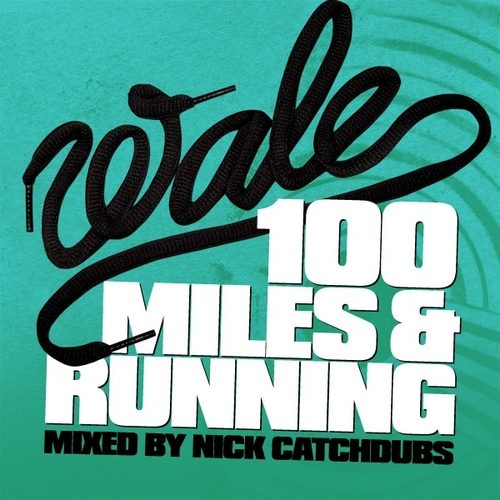 It’s fitting that in a year where CD sales are tanking, one of the best hip hop albums of the year is a free mixtape. Part of this has to do with the lack of competition: there simply haven’t been that many hot releases this year, at least before September. Another reason is the fact that mixtapes give artists the freedom to experiment and use samples that would never make it on a commercial release.

“100 Miles and Running” is a perfect example. DC native Wale (pronounced Wah-LAY) spits lines over songs by Camp Lo, Justice, Lily Allen, and Amy Winehouse, as well as some exclusives (hopefully from a soon-to-be-released debut album). “Work”, one of the albums best tracks, sees Wale spitting over a sample that meshes the “Apache” break with the Beatles’ “Hey Mr. Bulldog.” Much like Lil’ Wayne sampling “Help” on “The Leak”, there is NO WAY these samples could have been cleared, at least not without a ton of money. The result is one of the funkiest, fiercest tracks to grace hip hop in years, and Wale is absolutely on fire:

“Where the rollers at
Looking at me
How I attack these make ’em jump on it
Silly niggas who think they might want it
I make a couple of calls and y’all goners
[…]
I’m a martian, partner, I ain’t normal
I make a hater fall suit like a formal
I make a nigga part ways like a corn row
I keep a nigga in the pocket like congo
I bet I can’t go even when I encore
And I don’t keep bitches like lawmowers
They make you act green
And I mack like me
Never give cheese to them meese, mice, rats
I saw you where it’s at
Flow like nun
Celibate rap
Flow like battery
Never will adapt
Flow like zippo
So unmatched
Flow King Hippo
Leave him on the mat”

And he goes on an on for two full minutes, never even pausing, and dropping gems like “Fuck rap, I’m an ill-ass poet.” His combination of flow and lyrics is incredible, bringing to mind the best of the old school rappers, while stepping the game up for the new millennium. Listening to Wale rap reminds me why I love hip hop, and he makes up for all of the half-assed hustlers out there spitting garbage over Casio beats.

Besides flossing and showing off his verbal skills, Wale manages to instill a little social conscious in his rhymes, like on “Warming Up Cane” where he describes how crack has decimated African-American neighborhoods:

“Feds aint’ dumb but they sitting in the cold dark
I start to think it’s all planned
It’s all too black of me to blame it on the man
Blame it on a man named Reagan
Face it
Your face caucasian, you’re literally naked […]
It’s odd that they say the crack killed blacks
The crackerjacks say that the blacks kill blacks
The blacks kill blacks for a block or respect
Or the crack that they sell to put food in their kids
Shoot my pain and if you gonna listen
The government officials is rude in this district
They do the shipment we do the pitching
They do the scoring, we more like pimping
They locking us up for the drugs that they dealing
But I don’t know no hood nigga that’s a chemist”

DJ Nick Catchdubs keeps things moving, and doesn’t mess up the flow of the disc with cheesy sound effects or voice overs, like most mixtape DJs do. The freestyles are all a little left-of-center (and Eurocentric), which I appreciated. I think it’s more interesting to hear a rapper spit over a non-hip hop track rather than give his interpretation of how “This is Why I’m Hot” should go. “100 Miles and Running” is brilliant, fun, and banging. Find at your local record store or download it free at myspace.com/wale202. Now where’s the album, Wale?