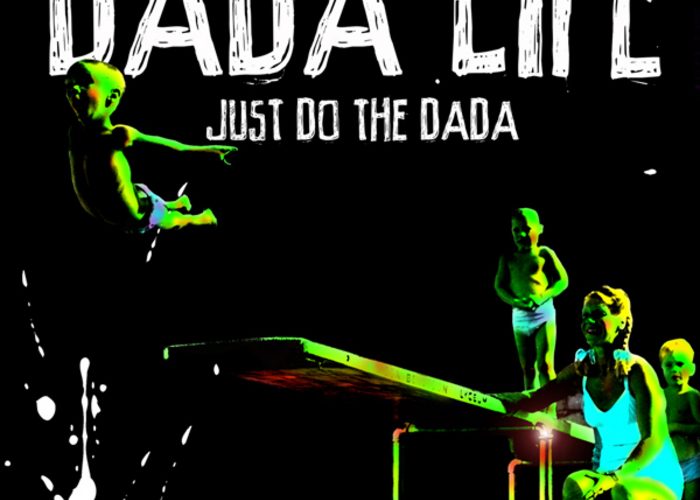 Dada Life :: Just Do the Dada

One of my favorite blogs is Look At This Fucking Hipster, which makes fun of hipsters as only a fellow hipster can. It consists of hipster party photos with captions like, “Can you get me a tofu dog? I’m kind of busy live-blogging this picnic.” I’m pretty sure that the anonymous author of the site is actually a Brooklyn hipster who is making fun of his own, and what I love about the site is that it is not mean-spirited so much as it is acknowledging how ridiculously over the top the irony-loving, pop-culture obsessed, and fashion-damaged younger generation has gotten. One of my favorite posts is a picture of two women in masks covered in paint. One is whispering to the other, and the caption says “Psst…we’re in two wars right now.”

Ok, so it’s not really fair. After all, it’s not only trendy twenty-somethings who are dancing while Rome burns, and at least dancing is a form of exercise. They could be sitting on the couch watching John and Kate’s relationship implode in realtime, or buying useless shit they can’t afford at their local Walmart. Many have argued that dancing is a form of protest, so the subjects lampooned in Look At This Fucking Hipster may just be slimfit jeans-clad revolutionaries.

It is very possible that those girls were listening to Dada Life, an electro-indie band that love all things retro, be it analog synths, 8-bit MIDI sounds, or mid-nineties trance and rave music. Sometimes they get it right, like on the glitchy, sublime “So You Wanna Be A Prankster,” with its distorted Nintendo bloops and blips. Then there are tracks like “Perfect Itch,” which sounds like a half-assed mid-nineties rave anthem done on shitty equipment. I’m also a little confused why they sent an indie/dance album to a hip hop site – maybe it was all part of the irony: “Omigod, let’s totally send it to RapReviews. Get it? Because they cover rap music and we aren’t rap?” But you know what? It’s a slow week, and I don’t mind a change of pace.

Their tendency to make music that sounds fifteen years old would be a serious handicap, but they are actually pretty decent, despite their ironic embrace of all things retro. They can build a groove, and underneath the old-school school sound of their beats hides real musical chops, as much as repetitive electronic dance music can be called “musical.” I just read “Last Night A DJ Saved My Life,” Bill Brewster and Frank Broughton’s history of the DJ, and that book reaffirmed my suspicion that making dance music, like making punk rock or even hip hop wasn’t the hardest thing in the world to do. But making it good, that’s another story, and Dada Life do it better than average. Like Daft Punk, they are trashy but funky, and know how to throw a good party.

I’m hoping the dayglo, ironic-mustache-wearing phase of hipsterdom will die out soon and be replaced by something a little more palatable, or at least not so aesthetically gross. Then again, I guess the 80s worship is better than all the overly sincere and tortured emo bands that were all the rage ten years ago, or the junkie look that hit in the late 90s. Each generation gets the music they deserve, and no doubt Dada Life will be the soundtrack to many art and design student parties this fall. May the Pabst Blue River flow like the waters of the mighty Hudson.