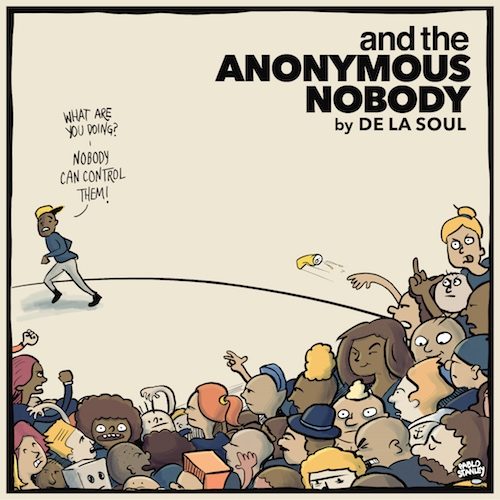 And the Anonymous Nobody

De La Soul :: and the Anonymous Nobody

A fair warning/disclaimer before you start reading this review. As a backer of the Kickstarter campaign that ultimately led to this album’s creation and release, I’m objectively biased to want this album to be good. Some of you will be aware that didn’t stop me from dissecting “Meow the Jewels,” another album I backed that was ultimately released, but in that case the internet all had a collective laugh at backing a ridiculous campaign, and the actual quality of the end product was the punchline whether good or bad (it was a little of both).

In this case the stakes are much much higher. An unprecedented SEVEN of De La Soul’s albums have been deemed worthy of inclusion in The Nines, meaning we the staff have held them up as albums you should consider absolutely essential as a hip-hop head. For De La to have an unsuccessful album after their loyal fans enthusiastically funded their campaign in 24 hours would not only be a blemish to that sterling reputation but a middle finger to everyone who patiently waited, waited, and WAITED SOME MORE to receiver the album as a backer reward. The reason people invested with such fervor wasn’t just because De La Soul are nice guys and we wish them well (they are and we do), it was because of that expectation of excellence going in. Pos, Dove/Dave and Maseo are known for doing hip-hop right, and if they couldn’t do it right on a crowdfunded album on their own terms with no corporate label constraints, then everybody put down their money for NOTHING.

That’s heavy right? I wouldn’t want that kind of pressure on me but De La embraced the grind and got to work. The end result sure looks promising from the moment you hit play, with over an hour of music and 18 tracks to look forward to, the kind of full length project all those backers have demanded. It doesn’t hurt that R&B soul queen and hip-hop darling Jill Scott narrates the intro. “Have you cried for ANYTHING lately? And I don’t mean for your friends or your bills or yourselves — I mean for THIS! When do you think it’s time to love something the most, child? When it’s successful? And done made everything for us huh? Tch! That ain’t the time at all.” Purposefully or accidentally she seems to be addressing both the skeptics who thought De La wouldn’t deliver and the skeptics who think that hip-hop CAN’T deliver music with meaning and feeling in 2016. Her lecture essentially suggests that when the chips are down in hip-hop, don’t fold your hand, double down and go in deeper. If you’re a backer though you already know.

If you didn’t expect De La to drop a single with Snoop Dogg to support the album and bridge the gap from Kickstarter to the mainstream, then you missed De La putting their chips in and doubling down on their end product too. A guest appearance from Calvin Broadus probably didn’t come cheap, but the lackadaisical Lion fits so naturally into the jazzy Soul groove that it’s a wonder nobody thought of doing it before. All of the collaboration choices for the other cameos are equally well met. The soulful croon of Usher Raymond on “Greyhounds,” the playfully minimalistic electronic sounds of Little Dragon on “Drawn,” a familiar feeling renunion with Damon Albarn on “Here in After” and so on. The only thing that really caught me by surprise was 2 CHAIIIIINZ appearing on “Whoodeeni.” Make no mistake about it – we haven’t been very kind in our reviews of Mr. Epps. Somehow though collaborating with hip-hop legends seems to have brought out his best – I actually found his verse thoughtful and the snaps amusing. He goes deeper than I ever would have expected from the jump.

“Born institutionalized
My homey from N.O. – find his crib with a roof on the side
FEMA ask him for an address but ain’t no mailbox
Nuttin left to do out here but to sell rocks
Now they got cell phones inside of the cell blocks
And my cousin on parole cause he sold Glocks
My cousin that sold stock
Told you we had mo’ soul than James Brown wearin a gold watch
that obviously don’t work
Used to go home and rob niggaz for homework, see if the chrome work
Might call your girl to see if my phone work!”

I’m not saying Chainz suddenly leapt into “Hip-Hop Quotable” territory but I will give him a harder look on the next album he drops. Of course his cameo doesn’t hold a candle to Estelle and Pete Rock on “Memory Of (Us)” but the mere fact I found it worth mentioning should indicate it would hold your attention. Actually though there’s not a moment on “and the Anonymous Nobody” that didn’t though, even when tracks like “Lord Intended” delve into some experimental areas. I don’t know The Darkness at all, but it seems like De La met their led singer Justin Hawkins halfway by making the track as crunchy as a Run-D.M.C. x Aerosmith collaboration, which Dave enthusiastically declares is “The hardest rock s–t you gon’ hear!” The reason I say “experimental” is that the song really could have ended at 3:15 but it continues on into a piano medley with a Prince falsetto and Hawkins wailing “F–K EVERYONE, BURN EVERYTHING” and a GOSPEL CHOIR accompanying and singing the same. It’s ballsy as hell.

So you wanted the answer to the question – was “and the Anonymous Nobody” worth the long wait for its release? I’ve admitted my bias up front and despite that if I knocked a single point off this album I’d be doing De La Soul a disservice. Despite the fact that they could have played it conservative and given fans the “classic De La” by doing collaborations with Redman, Q-Tip, Busta Rhymes and MF DOOM, and they would have been clapped on the back and congratulated for it they took RISKS. The only difference between the Kickstarter version and the commercial one is a bonus track called “Unfold,” but it’s a weird experimental ditty itself which plays out like De La are the stars of a spaghetti Western. I wish there was a mini movie to go along with it – and if that’s the only complaint I have about “and the Anonymous Nobody” then there’s nothing to complain about at all.